John Mathew Gutch (1776-1861), shown above, is not known as a collector of illuminated manuscripts, although his "valuable and extensive library" is mentioned in his obituary [1], and his Wikipedia page.

To students of Italian illumination he is, however, the former owner of an album (BL, Add. MS. 22310) containing nine full leaves from a Venetian Antiphonary attributed to the Master of the Donato Commission (here), and 23 cuttings.

Of the 23 cuttings, 22 belonged to Camaldolese houses on islands in the Venetian Lagoon. One is attributed to Don Silvestro dei Gherarducci, monk of Santa Maria degli Angeli, Florence, and thought to be from a Gradual made at Florence for its Camaldolese sister-house of San Michele, on the small island between the main islands of Venice and Murano: 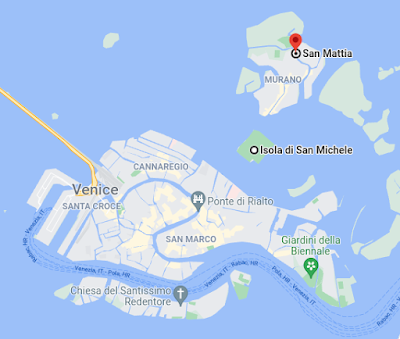 The other 21 initials are from a volume usually identified as a Gradual illuminated by the Master of the Murano Gradual for the other Camaldolese house in the Venetian lagoon, San Mattia, on the island of Murano [2]; 18 of these appear on a single sheet of the album:

The British Library bought the album at the sale of Gutch's library at Sotheby's on 16 March 1858 and following days, lot 1831:

All of the above has been known for many years, but what is apparently unknown is what happened to the adjacent lots in the Gutch sale. Lots 1830 and 1832 consisted of:

"1830  MISSAL ILLUMINATIONS. A Magnificent Collection of Paintings beautifully executed on vellum in gold and colours by Italian Artists during the XIVth Century, apparently cut out of a Service Book measuring 26 inches by 16 [ ... ]"

"1832  MISSAL ORNAMENTS. A truly Magnificent Collection of 103 beautifully illuminated Capitals cut from an ancient vellum Service Book of the XIVth Century [ ... ] executed in gold and colours on vellum by a highly skilled Italian Artist [ ... ]"

Lot 1830 was bought by Evans for £59 17s; so considering that the album bought by the British Library cost only £16, we can see that the auctioneer's high praise was apparently justified. I will save lot 1832 for another occasion, and concentrate now on lot 1830, whose full description is as follows (if you find the text in this image difficult to read, transcriptions will be found below): 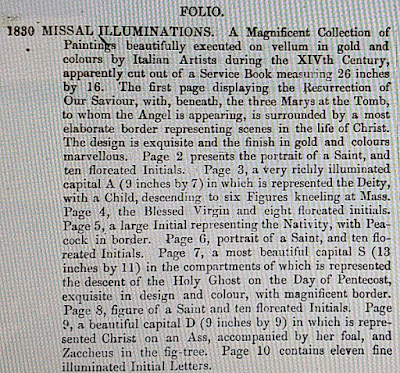 I puzzled over these descriptions for a while before the first piece fell into place, and then several others followed, like dominoes.
Many of the descriptions describe iconography that is too common to be helpful, but one includes a distinctive feature:

"Page 5, a large Initial representing the Nativity, with Peacock in border."

It seems to me likely that this describes a leaf now at the V&A Museum:

The iconography on its own is perhaps not enough to establish a certain identification, but the facts that the V&A leaf (i) was first recorded at the V&A in 1858, the year of the Gutch sale [3], (ii) has very nearly the same large dimensions as in the Gutch description [4], and (iii) is from the same set of choirbooks as the ex-Gutch cutting near the top of this post, makes the identification all but certain in my mind.

If any doubt lingers, I think it can be dispelled by comparing one of the other two V&A leaves acquired at the same time, with its description in the Gutch catalogue. Even though the cataloguer failed to identify the iconography correctly, the description is a precise match:

"Page 3, a very richly illuminated capital A (9 inches by 7) in which is represented the Deity, with a Child, descending to six Figures kneeling at Mass."

If these identifications of two items described in lot 1830 of the Gutch catalogue are accepted, we can make a few further identifications, including one more leaf at the V&A, which was apparently acquired together with the two above, in 1858:

"Page 7, a most beautiful capital S (13 inches by 11) in the compartments of which is represented the descent of the Holy Ghost on the Day of Pentecost, exquisite in design and colour, with magnificent border." 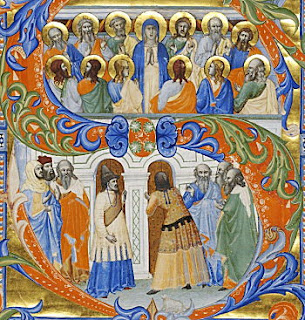 There is one other full leaf described in the Gutch lot:

"The first page displaying the Resurrection of Our Saviour, with, beneath, the three Marys at the Tomb, to whom the Angel is appearing, is surrounded by a most elaborate border representing scenes of the life of Christ. The design is exquisite and the finish in gold and colours marvellous."

This is not now at the V&A, but can be recognised among the other leaves that have been identified as coming from the same set of parent volumes:

To judge by the auction catalogue description, the rest of the album consists of cuttings rather than full leaves, one of which is described in sufficient detail to be identified among the cuttings known to be from the same parent volumes:

"Page 9, a beautiful capital D (9 inches by 9) in which is represented Christ on an Ass, accompanied by her foal, and Zaccheus in the fig-tree."

The subjects of the remaining cuttings are not described in sufficient detail to allow identification:

"Page 2 presents the portrait of a Saint, and ten floreated Initials."

"Page 6, portrait of a Saint, and ten floreated initials."

"Page 8, figure of a Saint and ten floreated Initials."

They perhaps include some of the the other cuttings of historiated initials at the V&A from the same parent volumes, which were acquired in two batches, the first at an unknown date before 1874, and and second group from Bernard Quaritch in 1906, including these four: 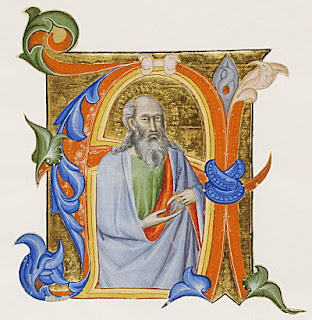 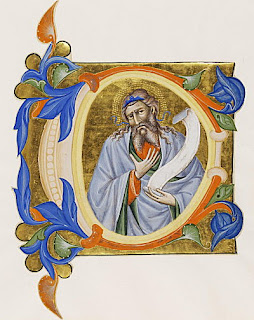 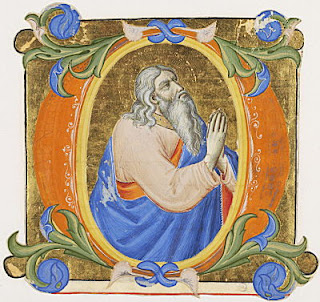 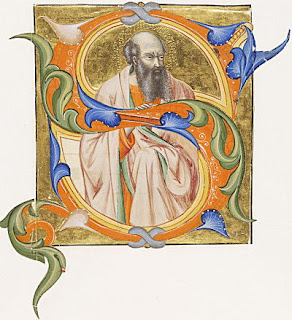 Although I don't yet have any proof, I think it quite possible that Mathew Gutch and William Young Ottley knew each other. They were roughly the same age (Ottley was born in 1771, Gutch in 1776). Ottley returned to England in 1799 after living in Italy for nearly a decade, and Gutch was living in London from 1800 to 1803. Gutch published Observations upon the Writing of the Ancients [...] and upon the Introduction of the Art of Printing, in 1827; Ottley wrote An Inquiry into the Invention of Printing, and although it was not published until after his death, it suggests that the men had interests in common.

As regular readers may remember, Ottley owned illuminated initials and a border by the Master of the Murano Gradual, thought to have been cut from a Gradual from San Mattia, Murano, so we might imagine that Gutch got his leaves and cuttings from Ottley.

This may be true, but if so, I suspect that Ottley in turn got them from Luigi Celotti, who was based for most of his later career at Venice, and was thus ideally placed to acquire leaves and cuttings from the choirbooks of various houses in the Venetian lagoon, including those of San Mattia and San Michele. I will say more about these choirbooks in later posts.

[2] Whether or not these initials really do come from a San Michele / San Mattia choirbook will be discussed in a later blogpost. In this post I refer to the houses being in the "Venetian lagoon" because there is confusion, or at least inconsistency, in the literature about how to refer to the houses and the islands on which they are situated, with phrases such as "San Michele in Isola", "San Michele a Murano", and most recently "San Mattia and San Michele in Murano" apparently being used indiscriminately. I have tried to use a more neutral phrasing because I do not know how medieval locals referred to San Michele, or which modern form is more "correct". I provide the Google map above to try to clarify their respective positions close to, but separate from, the main islands of Venice proper; this 16th-century map perhaps gives a more evocative impression of their relative positons:

[3] Mirella Levi D’Ancona, The Choir Books of Santa Maria degli Angeli in Florence, II: The Reconstructed ‘Diurno Domenicale’ from Santa Maria degli Angeli (Florence: Centro Di, 1993), p. 10 (and footnote 7 on p. 21), says that Michael Kauffmann (formerly of the V&A) told her that they were "brought from Marlborough House" (i.e the  Museum of Manufactures, the forerunner of the V&A) in 1858.

[4] The V&A leaves are recorded in the 1908 catalogue as being 23¼×16 inches, and in the online catalogue as 575×400mm. We cannot be sure whether the dimensions reported in the Gutch catalogue, "26 inches by 16" (approx. 660×405mm), represents (i) the dimensions of the medieval leaves in the album, as is implied by the phrase "apparently cut out of a Service Book measuring 26 inches by 16"; (ii) larger 19th-century sheets to which the cuttings are stuck (a comma or semi-colon after "Service Book" was perhaps intended); or (iii) the volume as a whole, including the binding.