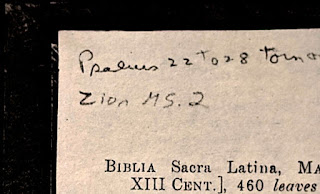 In the 1990s I catalogued a 13th-century Bible with varied and interesting indications of provenance, including an inscription "Zion MS. 2" on the first flyleaf, as shown above. Here it is in context: 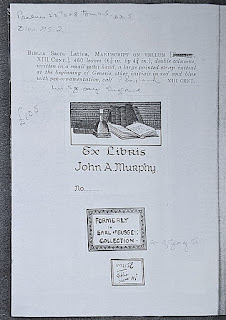 The "Zion Collection" was the name given to a group of medieval manuscripts owned by The Endowment for Biblical Research, a subsidiary of the Christian Science Church in Boston, about which I was able to find out very little.

The collection was on long-term loan to Boston University in the 1980s, and the best source of information is the catalogue edited by Judith Oliver: Manuscripts Sacred and Secular from the Collections of the Endowment for Biblical Research and Boston University (Boston, 1985). 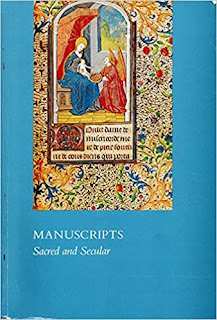 In 2008 I encountered another Zion Collection manuscript, so I contacted Judith Oliver for more information. She was able to tell me that Marguerite Smith, the librarian of the Endowment for Biblical Research (then called the Zion Research Foundation, located in Brookline, a suburb of Boston), is known to have bought manuscripts and leaves in London in the 1940s and 1950s.[1] However, not long after the 1985 publication, the Church was in financial trouble and had to sell the collection. In 2015 I learned that the collection had been bought by an ex-employee of Goodspeed's (the Boston bookdealers) together with Bruce Ferrini, with various items then making their way to other dealers, private collectors, and into institutions.

Edit, 9 Oct 2021: This Sotheby's description states that Ferrini bought at least one Zion Collection item in May 1998

The current Bloomsbury Auctions catalogue provides information that is new to me. It includes a leaf from a Bible dispersed by Otto Ege, leaves of which were included as no. 13 in his portfolio of 'Fifty Original Leaves':

It is no. 20 in the Sacred and Secular catalogue: 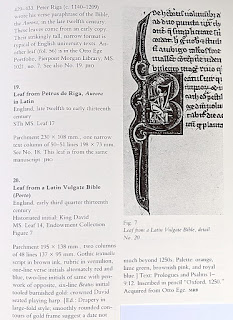 The Bloomsbury catalogue reveals that it was owned by Daniel Meyer Freidenberg (1923-2011), "with his pencil marks on reverse, recording this as his 'Zion 14'":

I had never heard of Friedenberg before, but Googling produces some basic biographical information, including this tribute in the New York Times, where he is described as a financier, collector, historian, philanthropist, and part-time Curator of Coins and Medals at the Jewish Museum in New York City from 1962-1982.
Initially I was very pleased to learn the identity of the anonymous collector responsible for the Zion Collection, but reconsidering what I had previously learned about the Endowment for Biblical Research, I am now very sceptical that the Collection was his. It is, I suppose, possible that he owned the collection, and loaned it to the library of The Endowment for Biblical Research, and retained this leaf when the rest of the collection was sold, but it seems much more likely that he had nothing to do with the Endowment and simply bought this leaf after the Zion Collection was dispered.
I would be very glad to learn the present whereabouts of other Zion Collection items. The codices that know about (with references to the Sacred & Secular catalogue nos.) are:
and we can end with a tantalizing puzzle:

Notes
[1] Lilian M.C. Randall, "Unpublished mediaeval illuminations from a Brookline, Massachusetts collection",  Connoisseur, 134, no. 541 (December 1954), 215-18.
[2] Peter Kidd, ‘Supplement to the “Guide to Medieval and Renaissance Manuscripts in the Huntington Library”’, Huntington Library Quarterly, 72.4 (2009), 1–101, at 50-56.
Update, 4 July 2021: Judith Oliver kindly tells me that this manuscript was previously being offered for sale by Boyd Mackus, and that he took it to (the medieval congress at) Kalamazoo.
[3] Update, 4 July 2021: Richard Linenthal kindly reminded me that I had neglected to include this manuscript in the list above.
Posted by Peter Kidd at 09:33