A Tree of Affinity [Part III] : The Missing Miniature Found

It was always my hope, when starting this blog, that it would allow me to provide periodic updates in a way that very difficult in conventional academic publishing, and especially to reduce the amount of time that elapses between making a discovery or observation, and sharing it with those who might be interested. Today's post is a case in point.

I have twice written about a volume of Goffredo da Trani's Summa super titulos Decretalium (here and here), and its interesting provenance. The volume remained complete until the Delamarre sale in Paris in 1909, and then, by 1928, had its two large miniatures excised. One of these (the Tree of Affinity) ended up in the McCarthy collection, the other (the Tree of Consanguinity [Wikipedia]) was untraced until now.


The Wadsworth Atheneum in Hartford, Connecticut, has very few manuscripts, but I recently discovered that one of them is the long-lost miniature, shown at the top of this post.

It matches the 1909 description nicely: 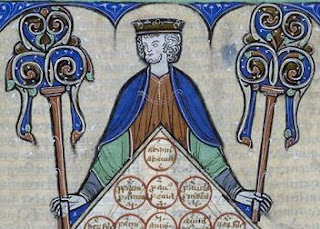 The style of decoration and script match the other miniature and the parent volume, but for anyone still sceptical, there is another conclusive piece of evidence that they belong together.

The only available image of the Wadsworth Atheneum leaf is not very high resolution, but one can just about discern the pencil folio number "145" in the upper right corner:
This corresponds to a gap in the foliation of the parent volume (now at Yale):