A Tree of Affinity

One of the miniatures in the private collection that I am cataloguing is this leaf with a fine miniature of a Tree of Affinity: 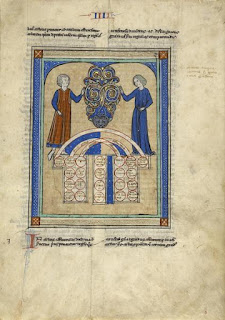 I already knew it from reproductions is a series of dealer an auction catalogues from the past few decades:
Sotheby's, 6 December 1983, lot 32, sold as "The Property of a Lady": 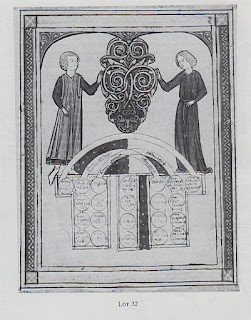 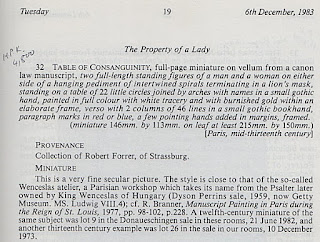 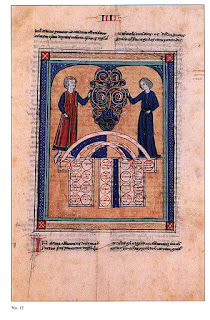 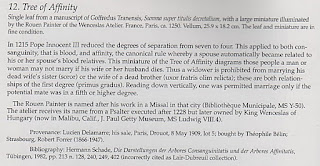 The 1983 Sotheby's catalogue records the only earlier provenance as "Collection of Robert Forrer, of Strasburg", without giving the evidence for this; the leaf neither has Forrer's usual ink-stamp (reproduced in previous posts, e.g. here), nor does it appear in his two published catalogues (one of which is online, see here).

It is not clear where the cataloguer got this extra information. The placement of the reference to the Sotheby's sale within the same brackets as Forrer's birth and death dates suggests that the leaf was consigned by his heirs, and if so, this could explain how the Sotheby's cataloguer was confident that it had belonged to Forrer, despite the absence of any explicit evidence. The reference to the buyer and price at the 1909 Delamarre auction suggests that the cataloguer also had access to a copy of the catalogue annotated with the prices and buyers' names.

The anonymous Delamarre catalogue provides two crucial pieces of evidence for tracing the provenance back to the Middle Ages: 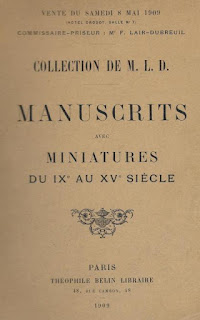 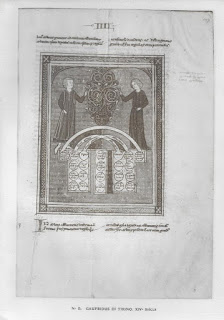 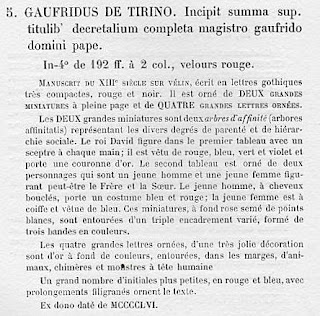 The catalogue tells us that in 1909 the leaf was still bound in a volume of 192 leaves, of which a description is provided, including the author and title, and ending with the comment that there is an "Ex dono daté de MCCCCLVI". A donation inscription dated 1456 should allow us to unambiguously distinguish this volume from other copies of the same text.

The Schoenberg Database deliberately excludes cuttings and leaves, and so has been no help up to this point investigating the single leaf, but it can now help us trace the parent volume. An Advanced Search for the word "Trani", and 190-192 leaves, produces five hits:


The last two of these records refer to a single manuscript (the correct item number in the catalogue is 42, not 38, and the very small discrepancy in the dimensions is due to a conversion from inches): 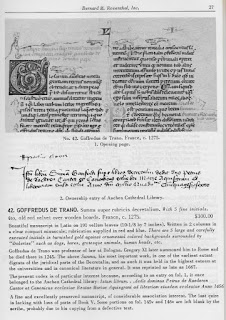 In addition to providing a photograph showing a sample of the script and decoration, this catalogue reproduces the inscription dated 1456:


So now we know that the parent volume was given to Aachen Cathedral in 1456 by Petrus de Raederen, (i.e. Roderen, north-east France). A man of this name is recorded as Cantor and Canon of Aachen cathedral; he matriculated at the University of Cologne to study canon law (and thus would have had an interested in Geoffrey of Trani's text), 14 March, 1451:
Just above the Aachen inscription is a name, read by Jacques Rosenthal in his catalogue as "Paulus Choczna": 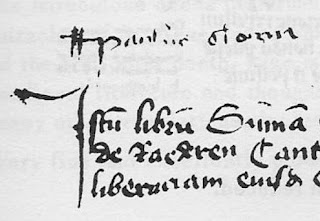 A man of this name was a Canon of Prague in the 1370s, described in at least one source as “baccalaurio in decretis plebano in Antiqua Colonia” (i.e. Starý Kolín, due east of Prague).

Returning to the Schoenberg Database statement that the manuscript was bought by Yale Law School, this is easy to verify: it is now their Rare36 11-0257. I will be visiting Yale at the beginning of August, and hope to verify or revise the reading of Paulus Choczna's name.