A Tree of Affinity [Part II]

A few weeks ago I wrote about a single leaf with a Tree of Affinity, now in a private collection. Since then I have had the opportunity to examine and photograph the parent volume, thanks to Mike Widener, of the Yale Law Library.

The volume is still bound in old red velvet, as described in the 1909 Delamarre auction catalogue: 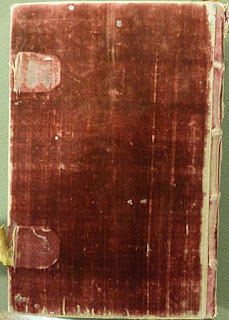 The volume itself has an illuminated initial and marginal animals at each of the five books into which the text is divided: 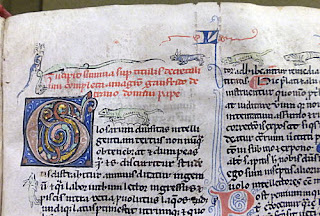 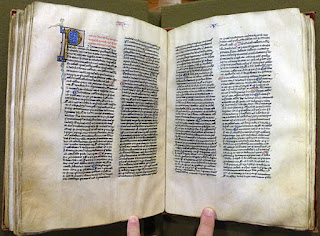 As recorded in the Yale Law Library description, the early 20th-century foliation now skips fols. 145 and 147 (these are the leaves on which the extracted miniatures occur): 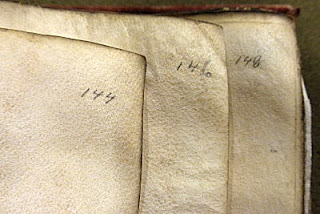 The scribe left part of fol.145v blank (because he had reached the point in the text at which he had to allow space for the miniature), and fol.146r begins in the middle of a sentence (because of the removal of the leaf): 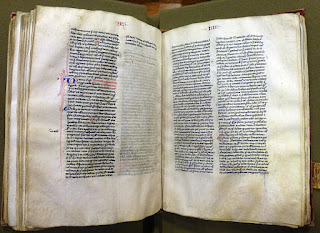 The same things happens overleaf, at the juncture of fols.146v and 148r: 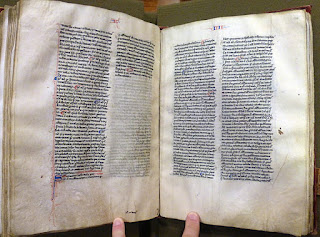 Another copy of the same text in the British Library (Add. MS 14072), written in Paris in 1265 according to a colophon, shows a different way in which the scribe allowed for the later insertion of Tables of Affinity and Consanguinity, on the recto and verso of one leaf: 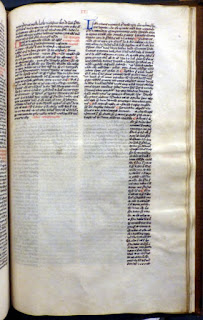 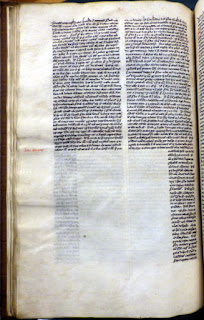 Interestingly, the Yale volume seems to be a previously unrecognised pecia manuscript, doubtless copied from the official version, divided into pecia, authorised by the University of Paris. On fol.34r, in the lower outer margin, is an annotation indicating the point at which the scribe reached the end of piece 11 of his exemplar, ".fi.xi.pe.": 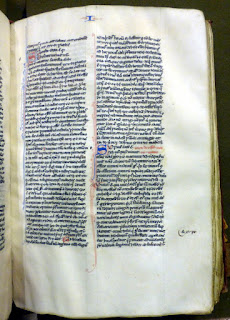 This can be compared to a comment and a plate in the classic work of pecia MSS: Jean Destrez, La pecia dans les manuscrits universitaires du XIIIe et du XIVe siècle (Paris, 1935):


A less abbreviated equivalent pecia annotation, in a BL manuscript, can be seen in the left margin here.

The ownership inscriptions described in the previous post are on the verso of the second flyleaf: 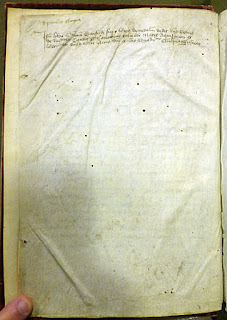 As suggested by Rosenthal, the name at the top does appear to read "Paulus Choczna", so the identification previously suggested may be correct: 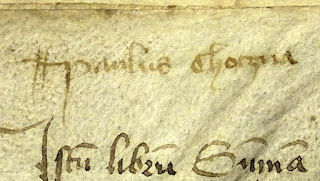