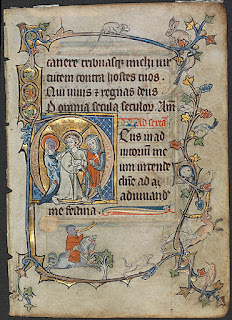 Over the course of  a few blog posts I plan to re-examine the provenance of the so-called Ghistelles Hours, and especially its oft-repeated association with Jan III, heer van Gistel, a.k.a. John III Ghistelles (d.1315), Lord of Ghistelles.

For this first post, why is the manuscript known as the Ghistelles Hours?

Sotheby's, 10 July 1967, lot 23, consisted of three leaves from the manuscript, described as follows:

with the following note:

"The heraldic banners ... have the quarterings of the ancient family of Ghistelles, in the county of Flanders"

The leaves were bought by Maggs, and the one with the heraldry was offered in their Bulletin No. 6: European Miniatures and Illumination [June 1969], no. 3, with a reproduction: 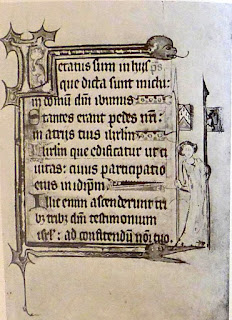 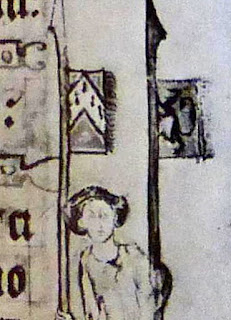 For anyone not familiar with the manuscript, it is worth mentioning that human, animal, and hybrid figures, equivalent to the woman holding banners, are a common feature of its margins; here are a few random examples: 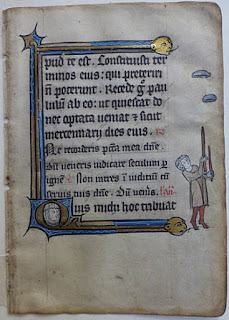 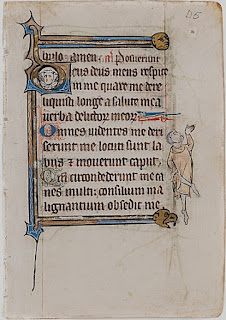 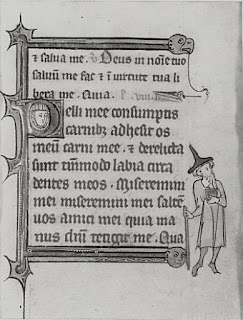 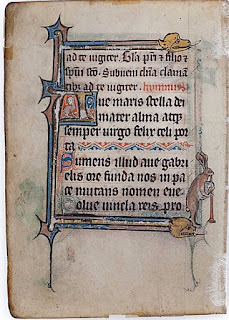 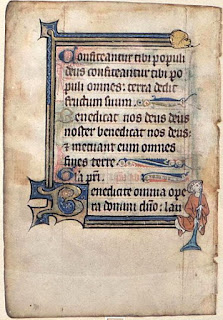 Leaves have appeared in auction catalogues every few years from 1966 onwards, including:
As far as I can ascertain, the book was first named "the Ghistelles Hours" in the 1971 Sotheby's catalogue, a name repeated in those of 1981 and 1986, but the book was still not associated with any particular member of the family:


"The Ghistelles Hours is so-called because some leaves included the heraldic banners of this Flemish family, gules, a chevon sable [this is a typo and should read ermine], or a lion sable."

In 1989 a list of about 40 leaves was published in M. Manion, V. Vines, and C. de Hamel, Medieval & Renaissance Manuscripts in New Zealand Collections, pp.91-92 no. 72. By this time, about a dozen leaves had been published in dealer and auction catalogues, and the rest were in a small number of private collections. The manuscript was cautiously referred to as "the so-called Ghistelles Hours", and the authors of the catalogue were careful not to push the evidence of the two banners too far, but for the first time suggested an connection with an individual: 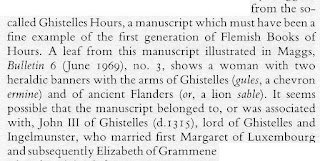 "It seems possible that the manuscript belonged to, or was associated with, John III of Ghistelles (d.1315) ..."


"The manuscript was very possibly made for John III of Ghistelles ..."

In the next post I will look at the known heraldry of John III of Ghistelles to see if it supports this assertion.