A Manuscript Divided Between New York and North Carolina 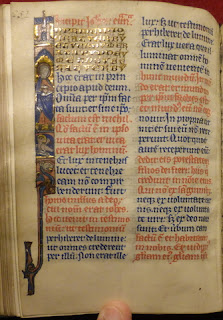 I first became interested in the medieval manuscripts of the Bibliotheca Swaniana in the 1990s, when I encountered one at the Bodleian. At some point I compiled a list of manuscripts from the Swaniana in some rudimentary webpages, to which I added occasionally. One of the first posts I wrote after starting this blog in December 2010 concerned two MSS from the collection.


One of the Swaniana manuscripts that I had known about for a long time (because it is in de Ricci's Census), is New York Public Library, MA MS 134. This was no.2 in the 2005 Splendor of the Word exhibition and catalogue, in which it is attributed to Paris, ca. 1250-60, and described as a New Testament, although it lacks the Pauline Epistles except for Hebrews. The description on Digitial Scriptorium widens the date to "s.XIIImed" (or 1240 - 1260), and broadens the place of origin to "France", without specifying Paris.

A couple of years ago I had an opportunity examine and photograph it for myself. The most striking things about it are, first, that it has far fewer lines per page (only 24) than a typical mid-13th-century Paris Bible. And second, when one gets the chance to turn the pages, one realises that while most of the text is in normal dark brown ink: 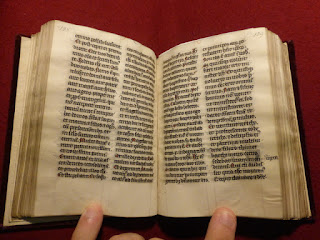 a few pages are written in alternating blocks of red brown inks: 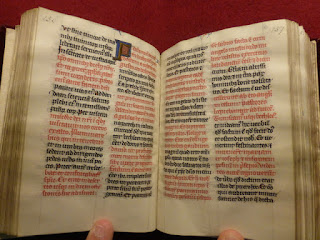 or red and blue inks, either as double-page spreads: 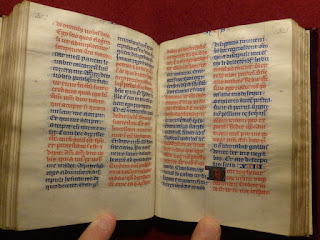 or as single pages: 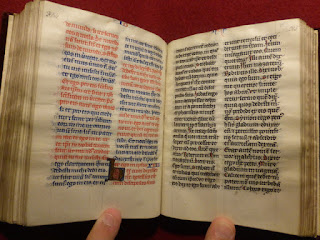 but the use of this multi-coloured effect does not always correspond to the start and end of a page: 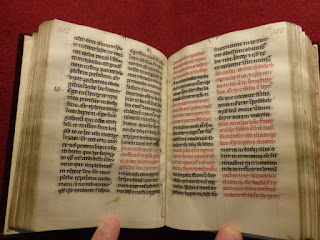 I failed to find any underlying system that might explain why some passages are treated this way, and the rest of the volume isn't.

On a recent visit to the Rubenstein Library at Duke University, North Carolina, I saw their Latin MS 32, which contains a selection of Old Testament books (Job, Lamentations, Proverbs, and Ecclesiasticus) and is mostly written in plain brown ink: 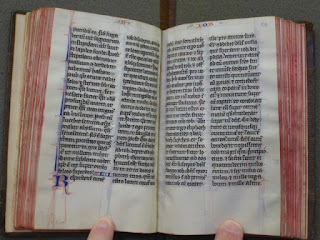 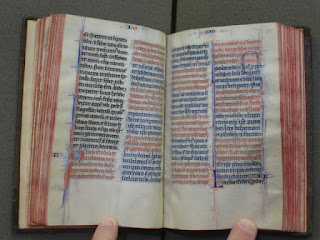 You have probably guessed what comes next. I deliberately left my fingers in the images above so that you can see that this volume is about the same size as the one in New York, and you can see that its overall appearance is the same: its two columns are each of 24 lines. I am confident that they are by the same scribe:
and thus they must presumably have once formed part of the same volume, or perhaps a two-volume pair. They must presumably have been separate since the 1790s when the NYPL volume, but not the Duke one, was owned by David Swan, in his Bibliotheca Swaniana.

Clearly the two volumes share a common origin, which -- along with their more recent provenance -- will be the subject of the next post.
Posted by Peter Kidd at 12:32