A Cistercian Missal From the Library at from Vyšší Brod, Formerly Owned by Otto Ege

In two previous blog posts (here and here) I added to what was previously known about a well-known Cistercian Missal apparently broken-up by Otto Ege, often referred to as FOL 2, because leaves of it were included as no.2 in his portfolios of Fifty Original Leaves.

In the first post I showed that it had been owned by the bookseller Emil Hirsch in the late 1920s or 1930s, when he published a detailed description, and I noted that:


"It is suggestive, but probably no more than a coincidence, that Hirsch owned two other manuscripts now at the British Library, both from Cistercian houses in southern Germany or Austria: Hirsch III.606, of unknown precise provenance, and Hirsch III.943, which may have been written in 1191 for the Abbey of Wilhering, a little west of Linz, and was later at the Cistercian abbey of Hohenfurt in Southern Bohemia, now Vyšší Brod in the Czech Republic"

(I mistakenly conflated the bookseller Emil Hirsch with Paul Hirsch, the musicologist whose manuscripts are under the "Hirsch" shelfmark at the British Library).


"... the missal is currently attributed to Austria; perhaps we should be looking to the far north of the present-day country, and into what is now the Czech Republic."

Though my reasons for the suggestion this may be incorrect (the addition of Wenceslas probably simply indicates Cistercian Use: he was added to their calendar in 1302), it turns out that the conjecture may be right. In an interesting recent blog post, Katharina Kaska shows that the ex-Ege Missal can be securely identified as a manuscript from the library of the Cistercian Abbey at Vyšší Brod: 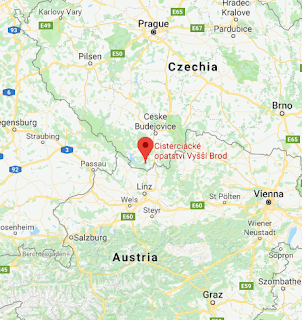 This is perhaps not the origin of the manuscript, however. Just as the Hirsch Missal at the British Library is thought to have been written at Wilhering, in Austria, and later found its way to Vyšší Brod, so too the ex-Ege Missal seems not to have been written at Vyšší Brod. In the 1891 description (no.CXXXIV here) it was recorded that "Die Missa de s. Bernardo wurde erst im XV. Jahrh. hinzugeschrieben", and in the more detailed description by Antonín Friedl (no.16 here; not published until 1968, but clearly based on much older records, as the book had gone by c.1930, and was eventually recorded as missing in 1945) he notes that

i.e. the office of St Bernard, Cistercian patron, was not added until the 15th century, so the Missal was therefore used earlier in a monastery of another, probably Benedictine order.

Clearly there is still more work to be done on this manuscript.