It has since been re-christened "La Bella Principessa", attributed to Leonardo da Vinci, and valued at £150,000,000. (By some people).

Every few years the portrait makes headlines, for example in 2010, when a book about it was published, and most recently a month ago, when renowned forger Shaun Greenhalgh claimed to have based the portrait on a check-out girl in his local supermarket in the 1970s.

I am not competent to comment on the attribution or the valuation, but I do have opinions about some of the evidence that has been put forward to argue that the drawing dates from the 1490s. It seems to me that this evidence has been used in a way comparable to Dan Brown's handling of "evidence" in The da Vinci Code.

The article suggests that the parchment leaf on which the drawing is executed was excised from an illuminated copy of the Sforziada printed on vellum, now at the National Library of Poland in Warsaw (it is digitized online). 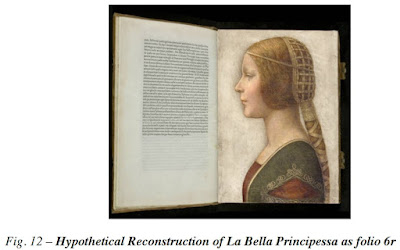 The Warsaw volume is one of three copies printed on vellum with illumination by Giovanni Pietro Birago, the other two being in Paris and London (one more has been cut up, and fragments of it are at the Uffizi).

The main evidence that it was once bound in any book is the presence of "three stitch holes":


"Given the three stitch holes along the left margin of the parchment, we concluded that portrait had originally been bound into a codex, most probably one of the luxury volumes of eulogistic poetry presented at key moments to the “princesses” at the Sforza court."

The hypothesis that the specific copy of the Sforziada can be identified as the one now in Warsaw is based on several observations, notably:
It seems to me that while the first two observations may be valid per se, they do not prove anything. Everything hangs on the "stitch holes": one at the level of the young woman's forehead, one level with the bottom of her chin, and one opposite her chest. 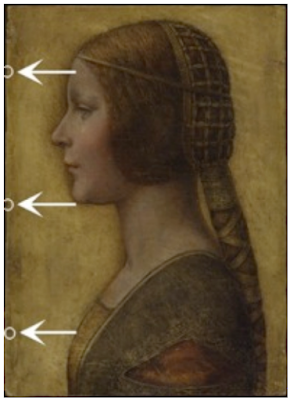 A high resolution image of the drawing is available online, so one can look at them closely:
By "stitch holes" the authors of this hypothesis mean the sewing-holes of the threads used by the binder in assembling the quires and sewing them together. There seem to me to be at least two fundamental problems with this hypothesis.

First, the "stitch holes" look nothing like the holes normally made for the sewing of a book-binding. The top one looks like a random defect, not a sewing hole; the middle one is surrounded by a stain like a rust-mark, suggesting that it was caused by a nail; and the bottom one does not even appear to be a hole.

Second, even if the differing shapes and sizes of these holes looked more like normal sewing-holes (which would not differ much in shape or size), they are clearly in the wrong places. The sewing of a binding goes though the gutter fold of the bifolia (or very close to it), but there is apparently no trace of such a fold corresponding to the "stitch holes" of the portrait. If these were sewing-holes, they would be far too far into the inner margin of the leaf.

Despite all the scientific-looking diagrams and photographs, the authors of the hypothesis have to word their observation as follows:

In other words the holes are not "identical to", or even "the same as", but only "notably consistent with" (an ambiguous phrase) the bound volume. If the drawing came from the volume, and the holes really were sewing-holes, then their placement, size, shape, etc., would be the same as holes in the rest of the first quire.

It also it seems inherently very unlikely to me that the binding of the original volume would have been sewn on as few as three bands. It is now bound on five bands, a far more common configuration for a folio-sized volume (the London copy is also sewn on 5 bands and the Paris copy is sewn on 7). If the authors are suggesting that the volume was originally sewn on 5 bands (as their image below implies), then they have to explain not only what has happened to the gutter fold, but also what has happened to the other two holes, which ought to be in vertical alignment with the other three. 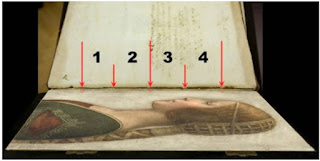 So much for the physical evidence. Considerations of aesthetics, design, and visual hierarchy are also an unacknowledged, but very major, problem for the hypothesis, which seems to suggest two different scenarios.

To my mind, each is as implausible as the other, but the latter option at least has the benefit of explaining why there is no offset from the colours of the portrait onto the page with the end of the text. (Another more obvious explanation springs to mind).

The hypothesis that the portrait comes from the Warsaw volume also includes the bizarre claim that:


"... it seems almost certain that the portrait was made for the Sforziad that was specifically printed on vellum for the marriage of Bianca and Galeazzo in 1496." [my emphasis]

-- this claim is made despite the fact that the book has a colophon stating that it was printed in 1490 (as were the London and Paris copies, which can both also be dated before 1494 on other grounds, thus ruling out the possibility that the date in the colophon is a typographical error):

In conclusion, perhaps the portrait is by Leonardo, and perhaps the parchment leaf on which it is executed was extracted from a 15th-century book, but as far as I can deduce from the evidence offered (without having examined the originals), the evidence suggests very strongly that it does not come from the volume in Warsaw.
Posted by Peter Kidd at 14:45