A Dismembered Prayerbook from the Collection of Henry Yates Thompson

Christie's recently held its first "Online Only" auction of medieval manuscript leaves and cuttings. I visited them while they were cataloguing for the sale, and was able to tell them that this fine miniature is by the Master of Jacques de Luxembourg:
and that two other leaves from the same manuscript are in the Jean Miles Blackburn Collection at the Cleveland Museum of Art:

Both of the Cleveland ones were bought from the late Bruce Ferrini (d.2010), who was infamous for selling leaves from recently-broken manuscripts. I later remembered that another leaf, now in a private collection, was on the front cover of his Catalogue 3 in 1995: 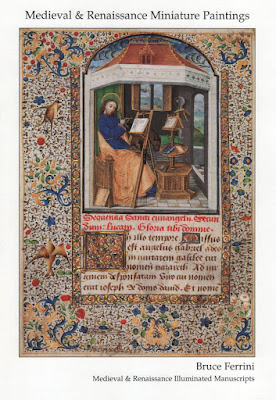 Browsing for old auction catalogues on eBay I recognised a bad photo of a reproduction as being another miniature:
I traced the catalogue (Sotheby's, 3 May 1904) and was therefore able to get the description: 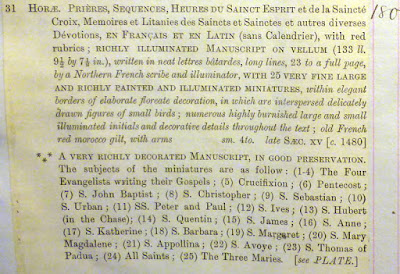 A search of the Schoenberg database, using the Advanced Search function to specify "Hours", "France", "133" leaves, and "25" large miniatures, did not provide a hit for this Sotheby's sale [1], but did produce two others, Schoenberg_50178 referring to a 1904 Quaritch catalogue, and Schoenberg_57680 referring to an 1894 [sic] Thompson catalogue: 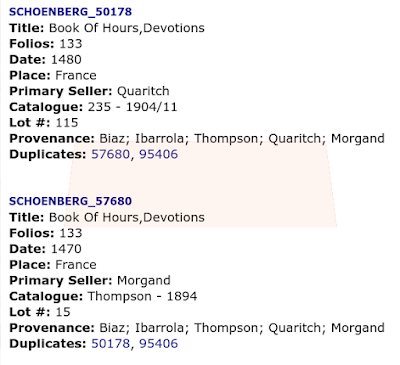 These two records both link, among the "Duplicates", to each other and to Schoenberg_95406, which is recorded as having 132 leaves and a much earlier date, apparently recorded from an 1893 Morgand catalogue:

In other words, the Schoenberg record gives us the reported date of Yates Thompson's acquisition from Morgand in 1894, not the 1898 date of the Yates Thompson catalogue itself: 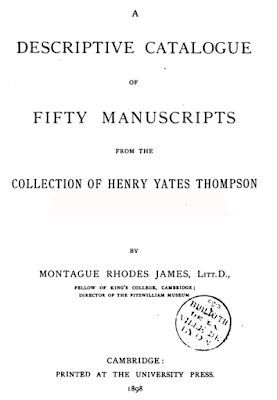 The description of the images in the catalogue correspond precisely to what we can see in the miniatures above, but I was still skeptical that any book good enough to be in the Yates Thompson collection, apparently lacking only a single leaf

and in an old morocco armorial binding, could have been broken-up in the 20th century, especially as the Sotheby's description omitted various details found in the M.R. James catalogue, such as the identification of the arms on the binding. Perhaps, I thought, the Sotheby's book and the HYT one were similar in some details, and had got incorrectly conflated in the Schoenberg database?

Because the St James leaf recently sold at Christie's had a high quality image, it is possible to see its folio number: 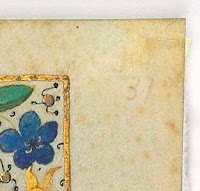 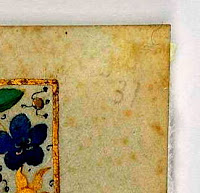 and confirm that the St James miniature was indeed fol.31r in the parent volume: 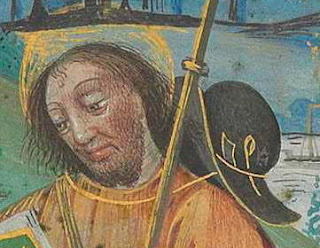 I should also have realised sooner that the Sotheby's manuscript is recorded as belonging to HYT on a webpage listing HYT's MSS that I compiled more than a decade ago.

The Master of Jacques de Luxembourg is named after a manuscript at the Getty Museum (MS Ludwig IX 11), which bears his signature:
and thanks to the images that they have put online, one can compare the miniatures in the manuscript with the single leaves: 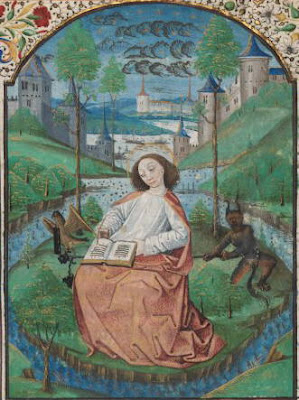 Allowing for differences of scale, photography, and perhaps fading of the red pigment, one can see that the style and composition are fundamentally the same, but the iconography of the larger Cleveland leaf is more complex.

As for the raison-d'être of this blog, the fact that we have traced the single leaves back to the M.R. James catalogue means that, as well as their owners from 1893 to 1904 (Morgand-Thompson-Sotheby's-Quaritch), we now have access to more data about their earlier provenance. MRJ writes:

I am not convinced by MRJ's analysis of the saints, but at least we now have some raw data to work with. He also describes the binding and its heraldry [in which I assume that "brass" is a typo for "bars"]: 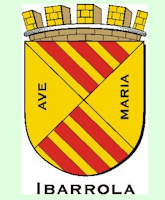 and here is a sculpted example of the Jove arms:
An owner from Navarre or Asturias, both in northern Spain, correlates nicely with an inscription that looks like it is written in Portuguese:

There are also various clues to the identity and interests of the original patron within the main texts of the book, including: a "Rubric concerning Canon Arnoul and the prayer: Missus est Gabriel" (fol.51r); a "Prayer to stop bleeding: Sanctus Xacharias" (fol.56v); a prayer including the words "moy poure pecheresse"; the suffrage to Anthony of Padua (placed after the Virgins, and before All Saints); and hymns to the Three Maries (the Virgin Mary, Maria Salome, and Maria Jacobi).

I am sure that more of the missing miniatures will come to light, and perhaps also the text leaves, and they may allow us to pursue the provenance further.

Postscript.
Just yesterday I found another leaf, with a miniature of St Apollonia (originally fol.37), in a book-dealer's catalogue: Hunersdorff Rare Books & Manscripts, Medicine: Five Centuries of Books and Manuscripts (London, 1992), no.7: 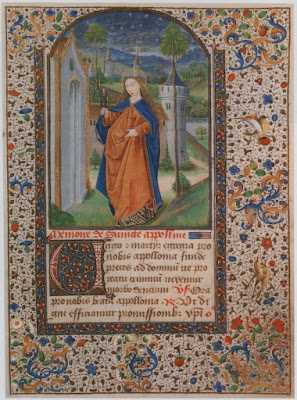 This combines the saint's pose in the equivalent Getty miniature (as well as details such as the clothing: blue cloak, red dress, black and gold brocade under-garment): 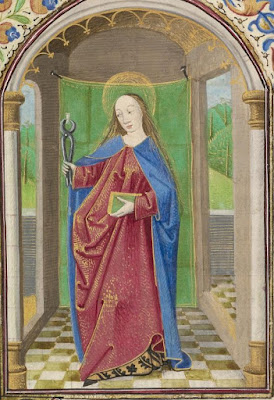 with a landscape similar to that of the Getty's St Barbara miniature: 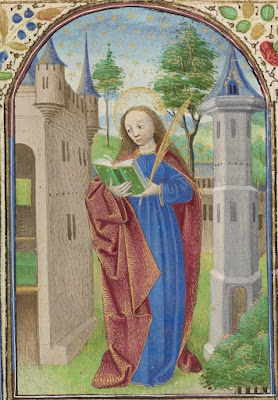 [1] A subsequent check showed that the 1904 Sotheby's sale of the manuscript is in the Schoenberg database: my initial search did not find it because the description does not use the word "Hours" (which is fair enough, because although the 1904 description begins "HORÆ, PRIÈRES, ...", it is not really a Book of Hours), but it incorrectly records the volume having 130 instead of 133 leaves, and records the 25 large miniatures as full page miniatures (these are separate fields on the Advanced Search page): 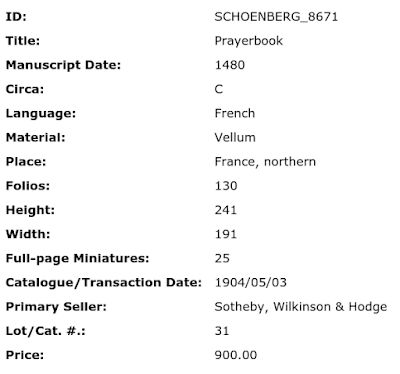