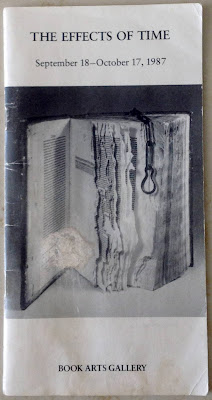 In a previous post I wrote about a 12-century Cistercian Missal whose leaves were dispersed by Otto Ege, in which I brought attention to a description of the book published in 1928, before it was dismembered. It was previously only known from a shorter 1948 description.

Barbara Shailor has kindly sent me photos of a catalogue called The Effects of Time: An Exhibition of Books Before 1600 with Artwork by Insects and Rodents, Mangled by Bookbinders and Dealers, etc.", held in New York in 1987: 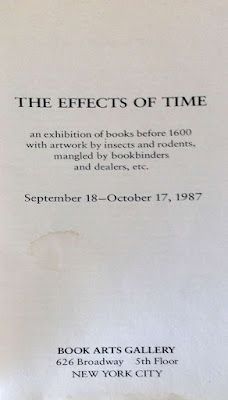 in which appears the carcass of the missal, its binding and 35 leaves, in the description of which which we are given not only a detailed technical description of the binding: 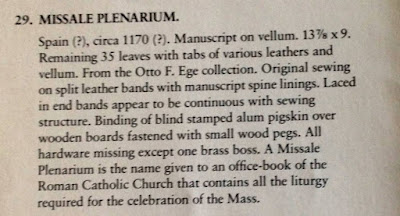 but also a photo on a double-page spread showing the last surviving leaf and the inner face of the spine and the back board: 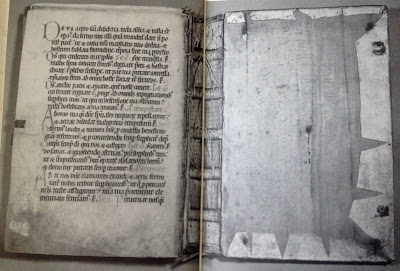 On the inner face of the back board we can see the dark rust-marks caused by five metal bosses, arranged as usual in a quincunx pattern, and two clasp fittings at the fore-edge: 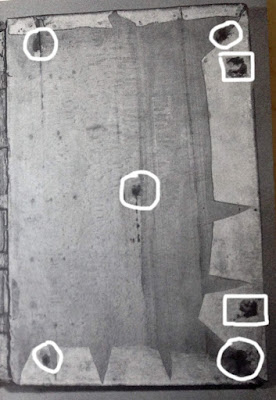 We can also dimly see the manuscript spine-lining mentioned in the description: 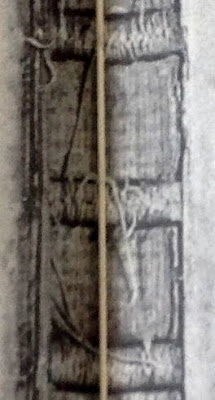 The final leaf visible in the photo in the catalogue above begins with the Collect "Deus a quo sancta desideria. recta consilia. ..." and the Secret "Deus qui credentes ..."
Barbara was subsequently given the bifolium that includes this very leaf, and kindly sent me images of it; here is a detail, corresponding to the one above:

She tells me that both the exhibition catalogue and the bifolium were given to her by Leonard Hansen (1920-2003), a real estate developer in Englewood, NJ, book collector, and member of the Grolier Club. He received it (together with a few other loose leaves from the same manuscript and other leaves from other manuscripts), when he was a Rutgers University alumnus active in library affairs, from Otto Ege's daughter whom he knew. He kept all of this miscellaneous material in a big trunk in his home together with some of his other treasures (including incunabula), some of which were bequeathed to the Morgan Library.

Here is the whole bifolium spread out:


From these images we can see that the bifolium consisted of fols.154 and 159: 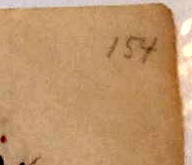 In combination with the list of contents recorded in 1928:

one can begin to reconstruct the volume, assigning the known leaves to their hypothetical original quires.

I failed to mention in the previous post that leaves from this manuscript were no.2 in Ege's famous portfolio of "Fifty Original Leaves ..." (often abbreviated to FOL); it is therefore FOL2 in the Handlist (Appendix X) at the back of Scott Gwara's Otto Ege's Manuscripts, 2013, where further references are given.

Looking through the images of FOL2 leaves on the Denison website, hoping to find a leaf with a catchword that would either support or refute my hypothetical quire reconstruction, I noticed that the leaf at the Lima Public Library, originally fol.130, has an added marginal note about the feast of St Wenceslas (28 September), just before the text for the feast of St Michael (29 September):
Wenceslas was especially popular in Bohemia and his relics are in Prague cathedral, which might help towards localising the origin of the manuscript: the missal is currently attributed to Austria; perhaps we should be looking to the far north of the present-day country, and into what is now the Czech Republic.


EDIT, 10 Jan 2016:
Perhaps the best available online images of the manuscript show the page for Easter, fol.34, recently sold by Christie's (click the "[source]" links to see much larger versions):