I have written a few times before about an interesting manuscript written by the scribe Pietro Ursuleo. Today I found a reproduction of a leaf that I had not seen before, from its litany of saints [1]: 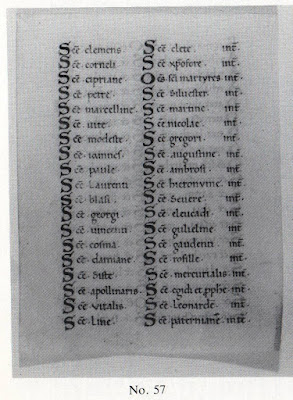 To me the most unusual saints appear to be this sequence, in the lower half of the second column, among the confessors: 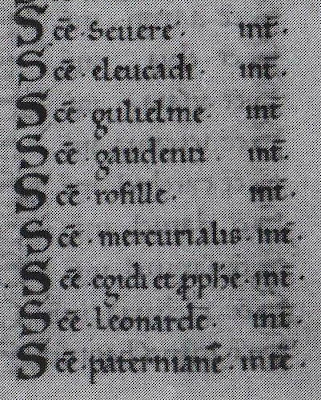 The litany is presumably very similar to, or identical with, that in the companion volume, MS. O.7.46 at Trinity College, Cambridge (which I have not seen, and is not yet digitized). In his description, M.R. James states:


"I conjecture from the entry of two Bishops of Naples in the Kalendar that the book was written for that diocese. The confessors named come from all parts of Italy."

From what we now know of the scribe and artist, James was absolutely correct to associate the book with Naples. But while it is true that (as in almost all calendars and litanies) there are saints from a wide geographical area,  it seems to me that the most unusual ones point in a very specific direction.

"Eleucadi" must be Eleucadius, bishop of Ravenna.
"Rofille" must presumably be Ruffilius, bishop of Forlimpopoli.
"Mercurialis", must presumably be the bishop of Forlì, who was believed to have conquered paganism with Ruffilius.
"Paterniane" must be Paternianus, bishop of Fano (and probably also of Bologna)
"Gaudenti" could be one of several saints named Gaudentius, but in light of the localisation suggested by those above, is perhaps Gaudentius, bishop of Rimini.
"Severe" could be one of several saints named Severus, but in light of the saints above, this presumably refers to the bishop of Ravenna.
"Gulielme" is hard to identify, and I do not know what to make of "Egidi et prophete". Leonard might perhaps be the abbot of Noblac abbey who was venerated at Macerata, a little south of Fano.

If we plot the above-mentioned places on a map we get rather a tight cluster, extending from Ravenna to Fano, and a little inland, like this:

And if we hypothesise that this is the area for which the book was made (or at least, from which the litany derived), it then probably becomes significant that the martyrs in the litany include, consecutively, Apollinaris and Vitalis: 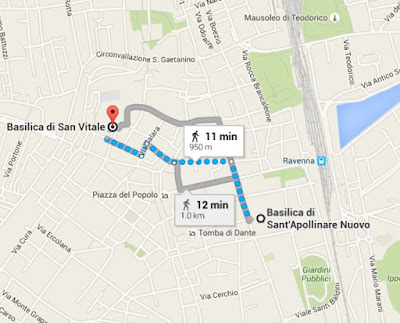 Most of the puzzles about the manuscript still remain, but this fresh look at the litany may, in due course, help solve some of them.

UPDATE 5 April 2016:
A colour image of the Litany leaf discussed above is available here.