Earlier this year I catalogued a Missal of the Use of York, one of only a dozen known to survive, with an interesting provenance, owned by someone who wanted to sell it to a public institution. Maggs handled the deal and everyone involved is happy with the result: it is now at Lambeth Palace Library. 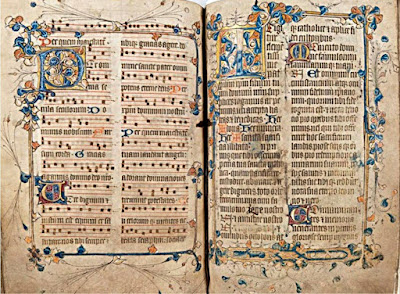 In the process of cataloguing it I became familiar with the features that distinguish the Use of York calendar from the much more common Use of Sarum, as outlined by Richard Pfaff, The Liturgy in Medieval England: a History, 2009, pp.445–62.

While browsing Digital Scriptorium (from which all the images below are taken) in advance of a recent visit to the Grolier Club, New York, I noticed that their MS 3 has most of these features.


The Digitial Scriptorium description attributes the volume to 14th-century England, but gives no more precise details as to its origin:

But a look through the calendar, which Digital Scriptorium helpfully provides in its entirety (a leaf with November and December is missing from the manuscript), reveals the following entries, among others:
Wilfrid, archbishop of York (24 April):

John, archbishop of Beverley (7 May):

Pelagia, Paulinus of York, and Wilfrid, archbishop of York (8, 10, and 12 October, respectively): 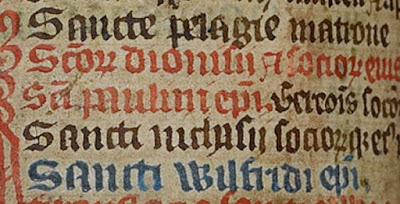 the York feast of relics (19 October):

and the Translation of John of Beverley (25 October):

York saints also occur in the litany and Sanctoale.

Some possible clues to the date of the volume are provided by added entries. At 17 October is an entry that I find difficult to read, but it seems to begin "Bellu(m) ap(u)d Durem [sic] A & c xlvj & dd. br[...]"

This presumably refers to the Battle of Neville's Cross, which was fought near Durham on 17 October, 1346, at which King David II of Scotland was defeated; "A & c" may therefore possibly be a sort of shorthand for "Anno etc.", i.e. "Anno domini MCCC", while "xlvi" refers to the specific year in the 1300s, and "dd" is a common abbreviation of the name "David", but the final word eludes me. The fact that this entry is an addition could mean that the calendar was originally written before 1346, and that it was being used somewhere in the vicinity of Durham.

St Thomas of Hereford (2 October) is another addition; he was canonised in 1320, which could mean that the calendar was originally written before this date.

The volume has a curiously tall, narrow, format, and has been much used: 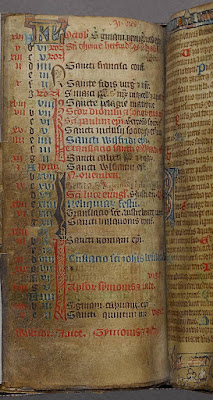 Considering the rarity of manuscripts of the Use of York, it would repay further study.

EDIT 25/10/15:
I should have mentioned above that the Breviary's general origins are not completely "unrecognised", as it is housed in a modern box labelled "Breviarium. Yorkshire, England. 14th century. De Ricci 3"; but I was not aware of this until contacting the Grolier Club. It also turns out (I should have checked before) that the manuscript has been listed in print once before in the context of its Yorkshire origins, but without any detail.
Posted by Peter Kidd at 11:48