A 13th-Century Bible From Beauvais at Smith College

On a recent visit to Smith College, Massachusetts, I saw a 13th-century Bible (MS 241) with unusual clues to its provenance. 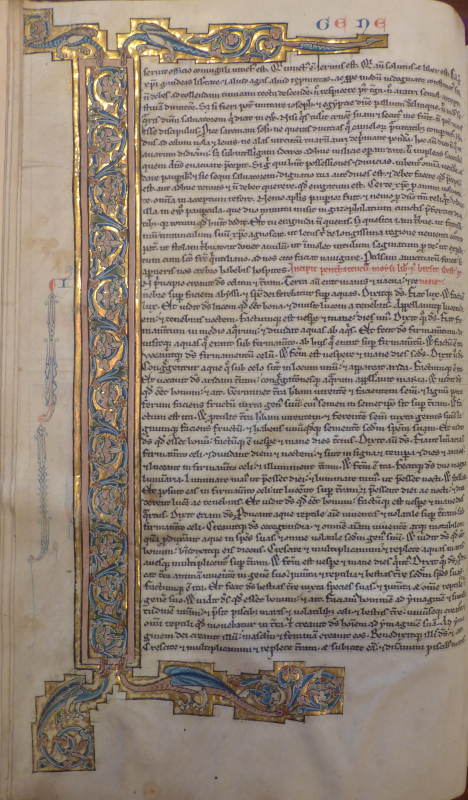 It is folio size, rather than the 'pocket' format so common from the 13th century, and unusual in being written in a single column. It is decorated with fine initials, either in gold on a blue and rose parti-coloured ground with white ornament: 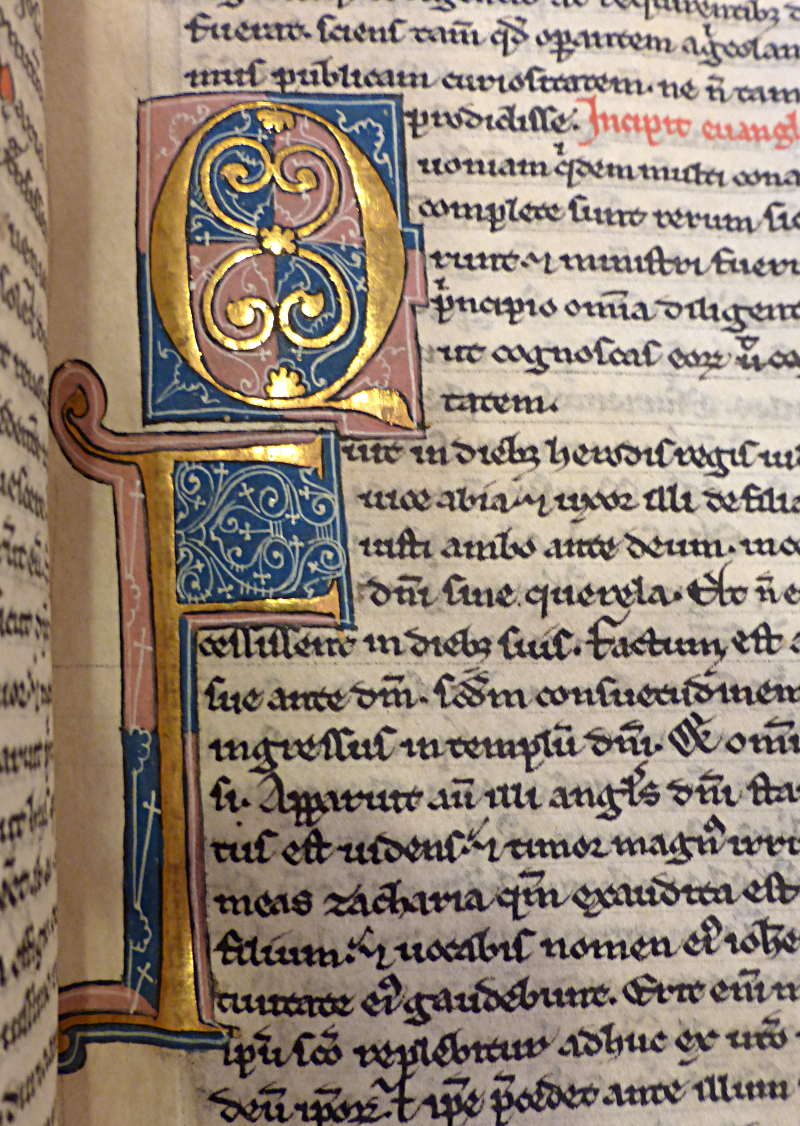 or puzzle initials in red and blue: 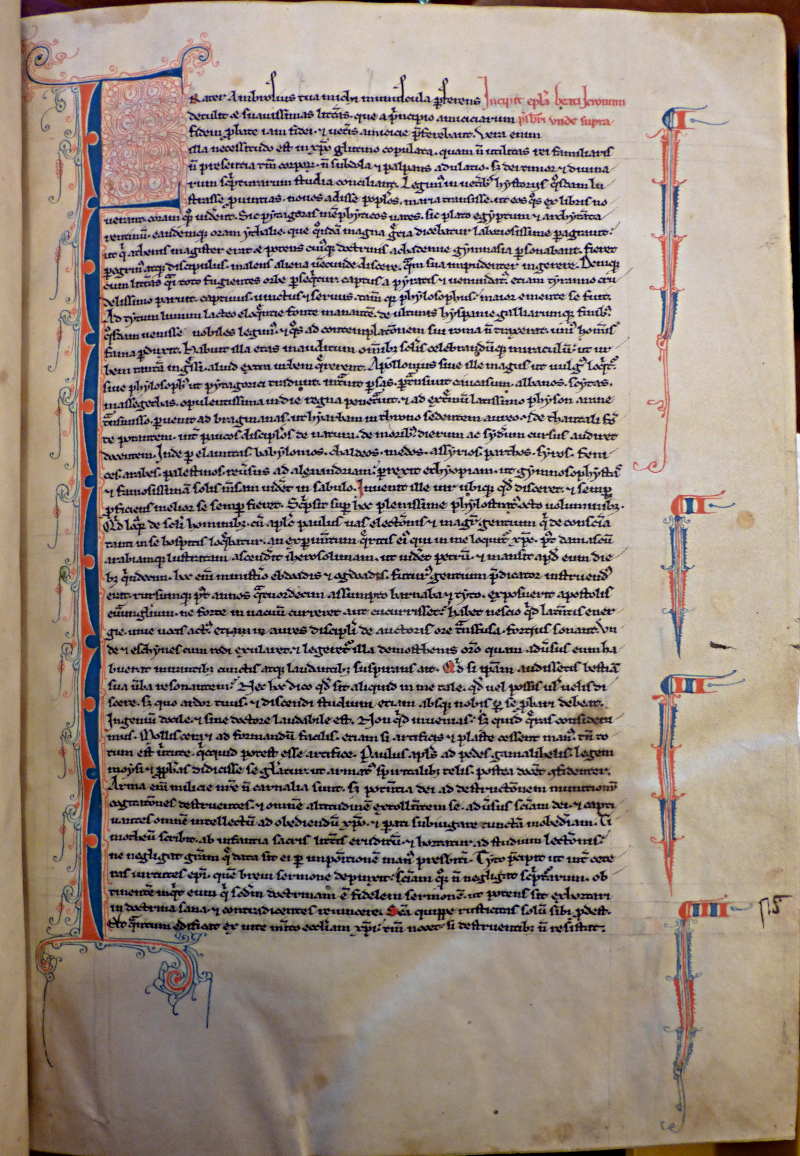 The Genesis initial has some fine foliage and dragons, but there is no human figurative decoration.

The text is written 'above top line' which, combined with the style of decoration, suggests a date in the 1230s or '40s. In light of its later provenance I take it to be French, but a similar style is also found in English manuscripts of this date.
[Feel free to contradict me in the comments below!]

A late 19th- or 20th-century pencil inscription on a paper flyleaf reads "Early thirteenth Century / in the Rhine Provinces near Nymegen [sic] / and Xanten".

Evidence for this localisation is not apparent to me, but the current catalogue description follows it and tentatively attributes the volume to "the Rhine Provinces":

although another Smith College webpage does suggest that is is more likely to be French.

The first parchment flyleaf has a long and unusual inscription:

Which may be translated as:


In the year 1312, on the 28th day of February, which was Monday of Quinquagesima, the king conferred on me the prebend of Saint Quentin.

Item, in the same year and month, on the 29th of February, lord Jean de Marigny, then elected and confirmed [bishop] of Beauvais, conferred on me the prebend of Saint Michel, Beauvais, to which I was received in the aforesaid year, in the month of March, on the 3rd day.

Item, in the aforesaid year on the 8th day of March, I resigned the prebend of Noyon, & the following day was received to the prebend of Saint Quentin.

"Saint Quentin" suggests the town of Saint-Quentin, not a huge distance from Noyon and Beauvais, the other places mentioned: but in the present context it is perhaps more likely that the writer is referring to the Abbey of St Quentin in Beauvais itself.
[EDIT, 7 Dec. 2014: Jean-Luc Deuffic points out in the comments below that the church in Saint-Quentin is, in fact, more likely than the abbey in Beauvais]

Despite all this detail, the writer does not give us his name.

The dates are also confusing:


The discrepancy is settled by the fact that Jean de Marigny became bishop of Beauvais in 1313, which confirms that this is the year being referred to. Presumably the writer mistakenly thought that the day after 28 February 1313, was 29 February.

The whereabouts of the manuscript are unknown for the next two and a half centuries, but there is an erased 14th- or 15th-century signature(?) on the last page: 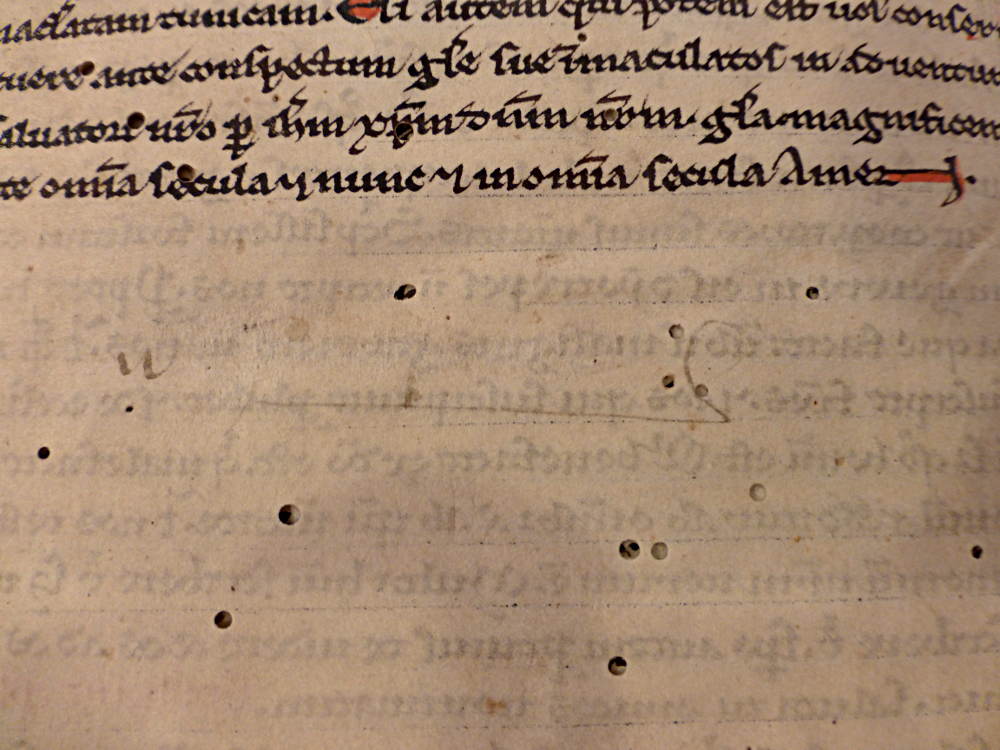 And on 2 February, 1567, Nicolas Goletius of Enghien, wrote an ownership inscription: "Anghienii" may refer to Enghien in Belgium, or perhaps more probably Enghien-les-Bains, between Paris and Beauvais.
[EDIT, 7 Dec. 2014: Jean-Luc Deuffic points out that Enghien-les-Bains did not exist before the mid-19th century, so the Enghien between Brussels and Mons must be referred to here.]

The Bible then disappears from sight for another two centuries, but by the later 18th century it was owned by the Classical philologist Karl Luwig Bauer of Hirschberg, who published an account of it in the Lausitzisches Magazin for 15 April, 1784 (pp.108–10), which begins: 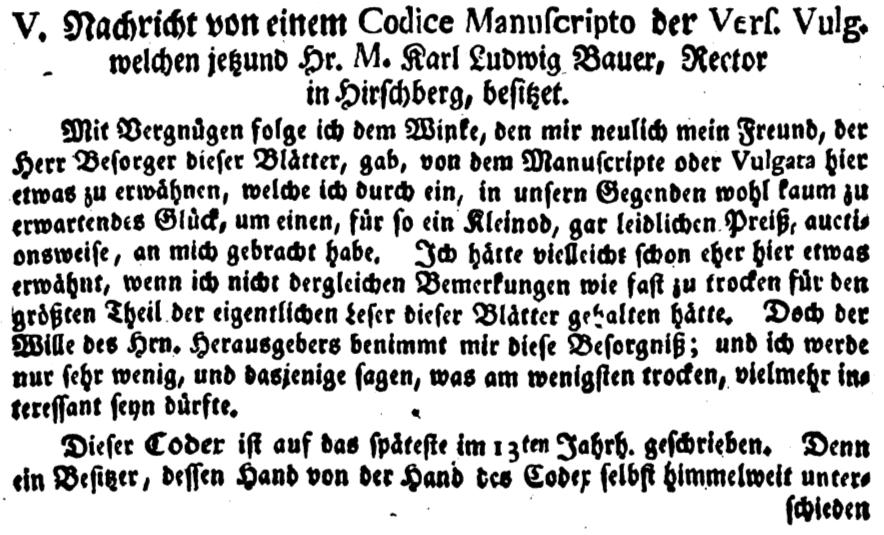 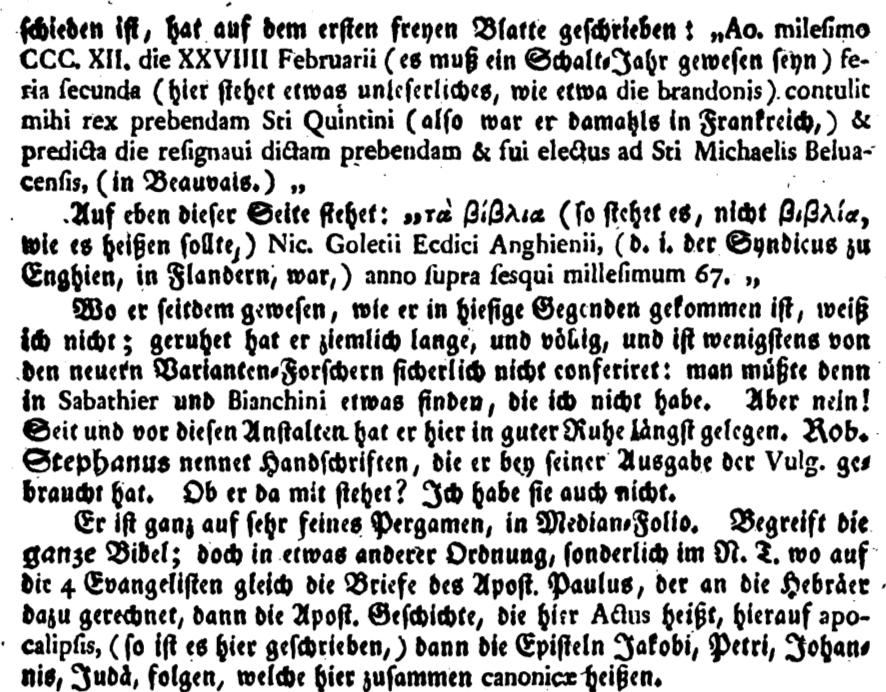 There are further gaps in the Bible's recent provenance. The front pastedown bears the bookplate "Library of Alvin W. Krech, 1893": 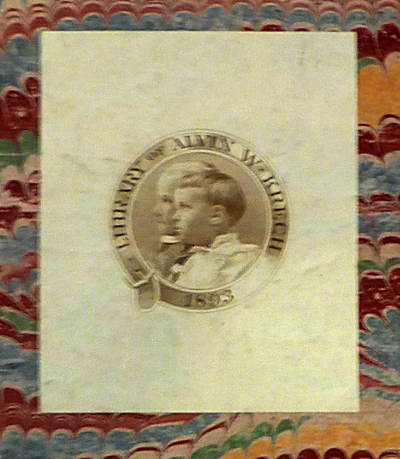