Many American and private collections have one or more leaves of an easily-recognisable prayerbook dated 1524 and attributed to Hildesheim. 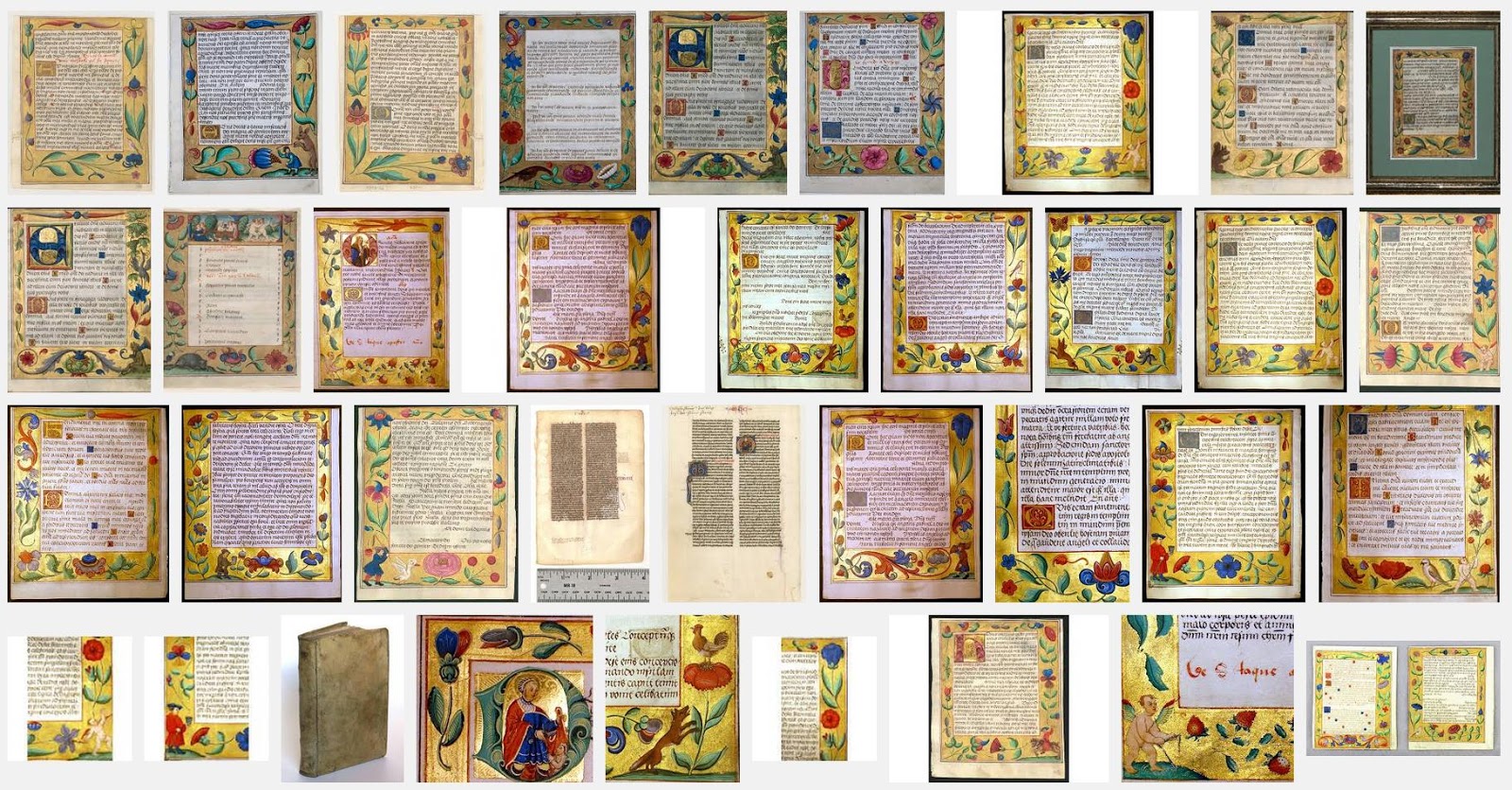 This leaf is at the University of Northern Illinois :

Several are currently, or have recently been, on the market: 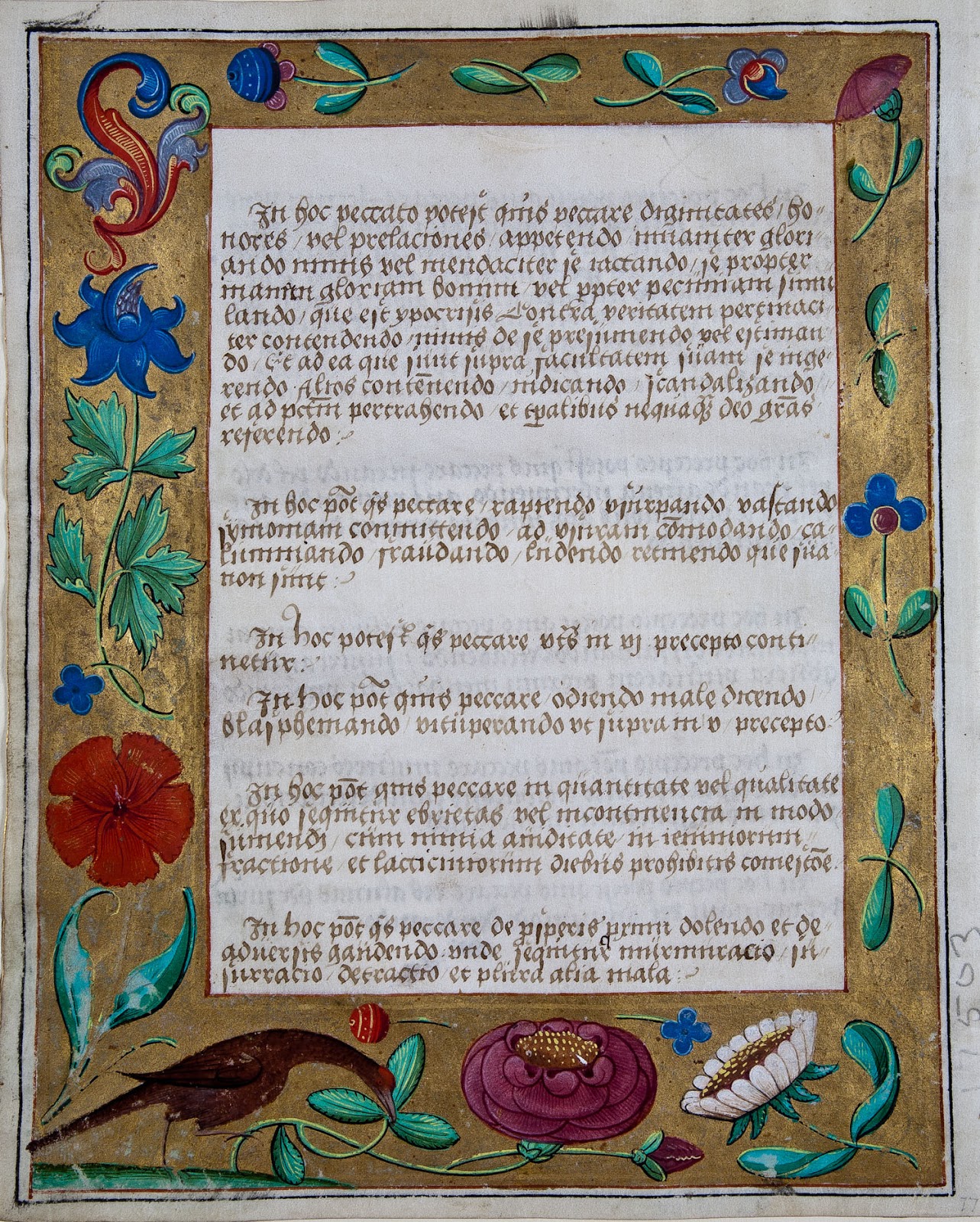 Most of the owners are aware that the manuscript was intact as recently as its sale by Sotheby's, 23 June 1987, lot 100, where some earlier provenance is given.

In the Sotheby's catalogue it is recorded that "Two of the borders are dated 1524 (ff.61v and 74) and on f.45v an angel holds a shield with the arms of Mansfield. ... The only unusual saint singled out with a miniature in the book is St. Godehard (d.1038), bishop of Hildesheim, a notable centre of artistic activity about 75 miles north-west of the castle of Mansfield, in Prussia, between Magdeburg and Merseburg."

Google Maps suggests that it is actually closer to 90 miles: 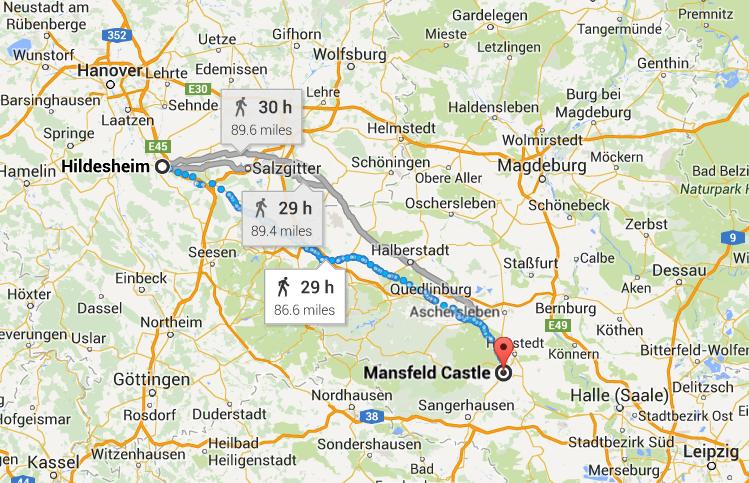 The next stages in the provenance are that it was "taken to France (or Belgium perhaps ...) where all the red rubrics were added in French"; "The arms of Adrienne de Louvignies have been added in the mid-sixteenth century on f.1"; and finally, "Nineteenth-century signature of the Comte d'Aspremont-Lynden".

The manuscript was bought at the 1987 auction by "Pairvel" for £60,000 plus 10% commission. It was still intact a decade later when it was offered by the dealers Jörn Günther of Hamburg and Bruce Ferrini of Akron, Ohio, in their catalogue of Recent Acquisitions: Medieval and Renaissance Illuminated Manuscripts (Autumn 1997): 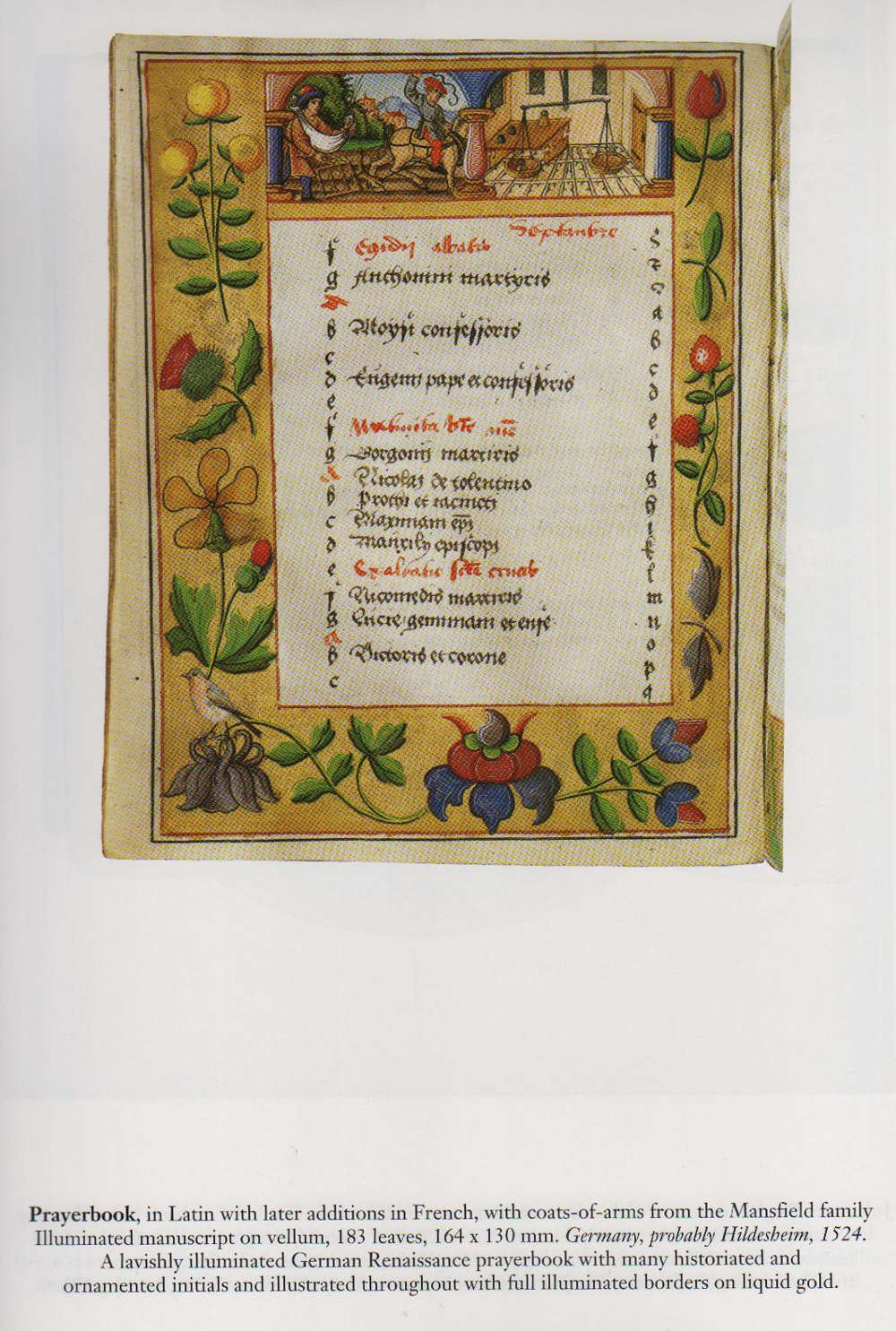 By the following summer, however, the book had been broken, and individual leaves (now attributed to Regensburg) were being offered by Philip J. Pirages, Catalogue 41, item 67: 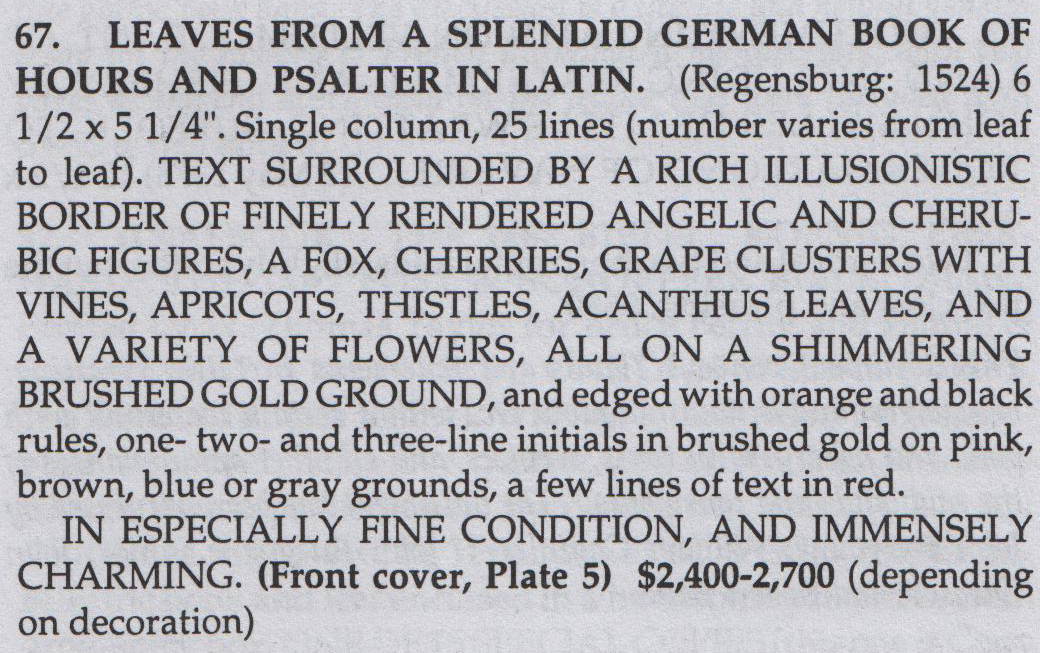 One significant detail of the provenance seems, however, to have been overlooked by everyone who has catalogued either the whole manuscript or its leaves. 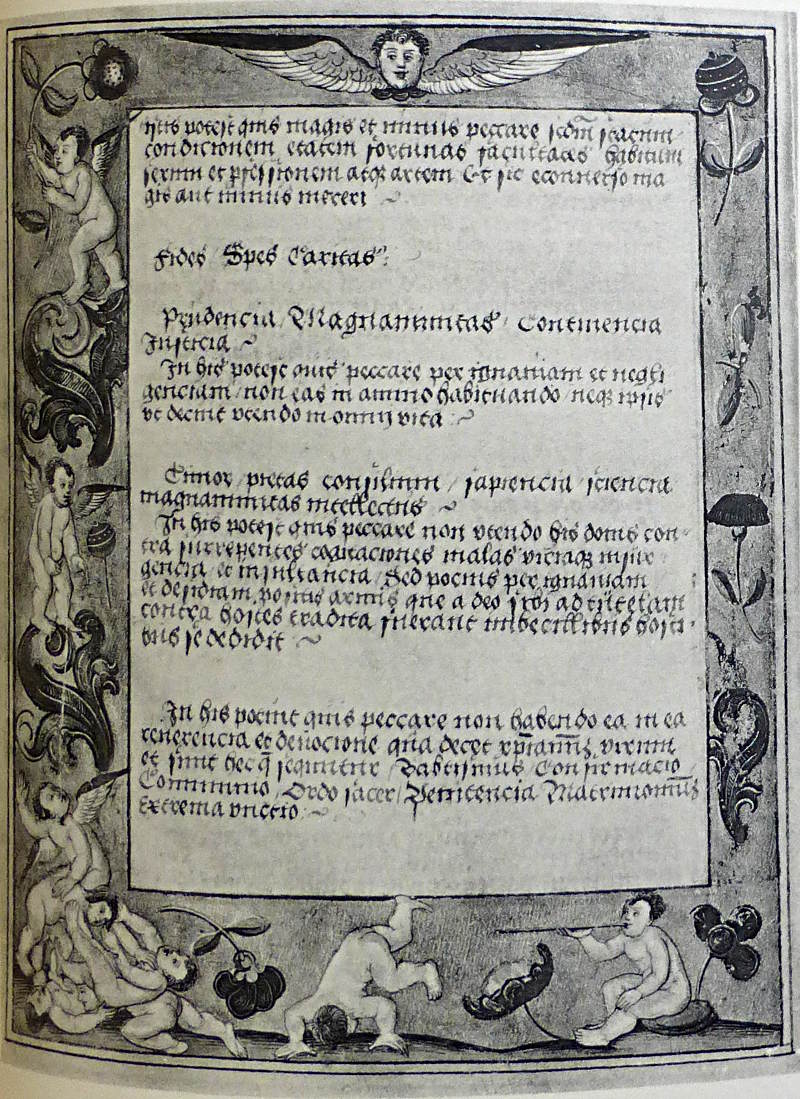 The Linel Sammlung was formed by the brothers Michael (1830–92) and Albert (1833–1916) Linel, of Frankfurt am Main. It was was acquired by the city of Frankfurt for the Kunstgewerbemuseum by purchase in 1892 and by bequest in 1916. In July 1953, however, some of the manuscripts were de-accessioned, and exchanged for other works of art, with the local dealer W. Heinrich. At least two of the de-accessioned Linel manuscripts were acquired the following year by the Spencer Collection at the New York Public Library from the dealer Helmuth Domizlaff of Munich: Linelsammlung L.M. 38 is now NYPL Spencer 151 and L.M. 8 is now Spencer 152: see The Splendor of the Word, New York Public Library exhibition catalogue (2005), nos.64 and 68.