Long-Lost Miniatures from the Sigmaringen Psalter 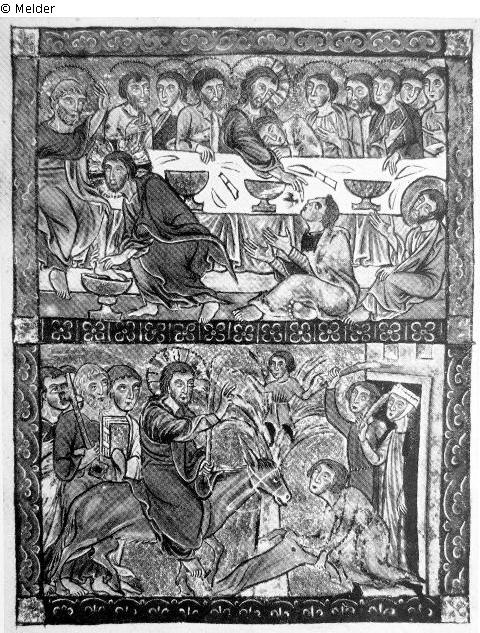 The accompanying text states that this leaf was auctioned in Berlin in 1936, in a forced liquidation sale of 500 objects owned by the Jewish art dealer A.S. Drey: 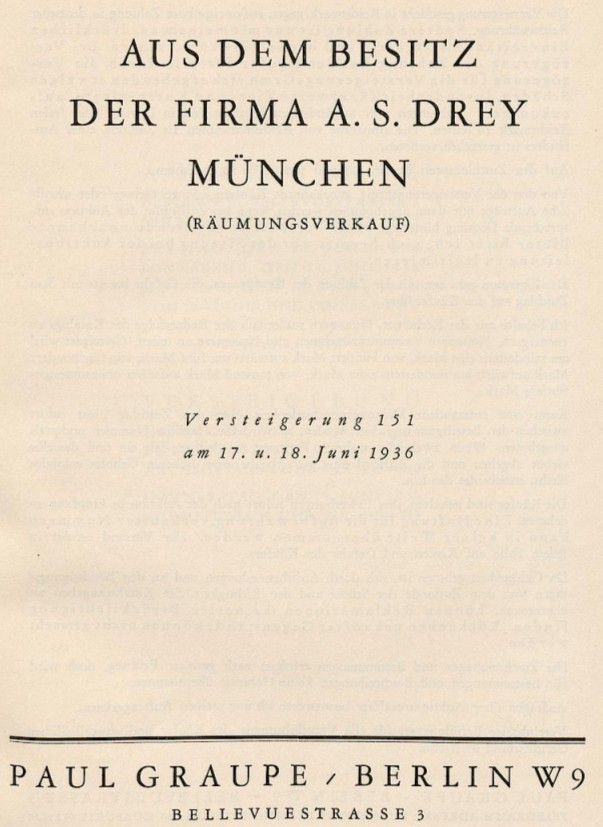 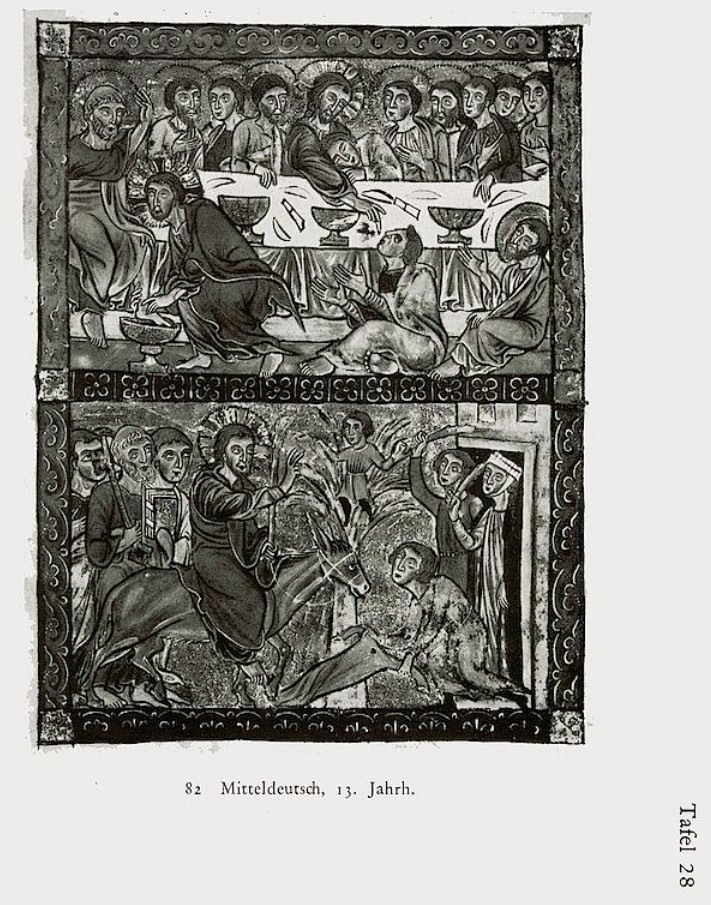 I had encountered it a few weeks earlier: as the 1936 catalogue states, it had been sold anonymously in Berlin by Ball & Graupe as part of "Eine Wiener Sammlung" (i.e. the Czeczowitzka collection), on 12 May 1930, also in Berlin, by Ball & Graupe: 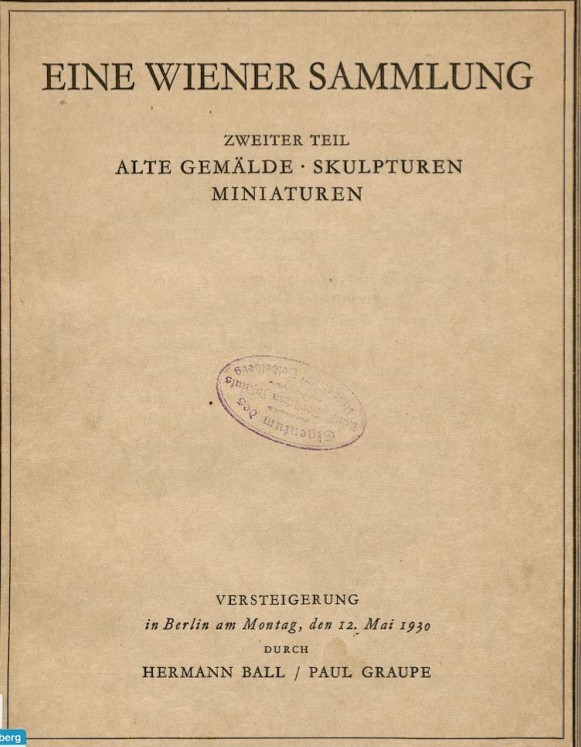 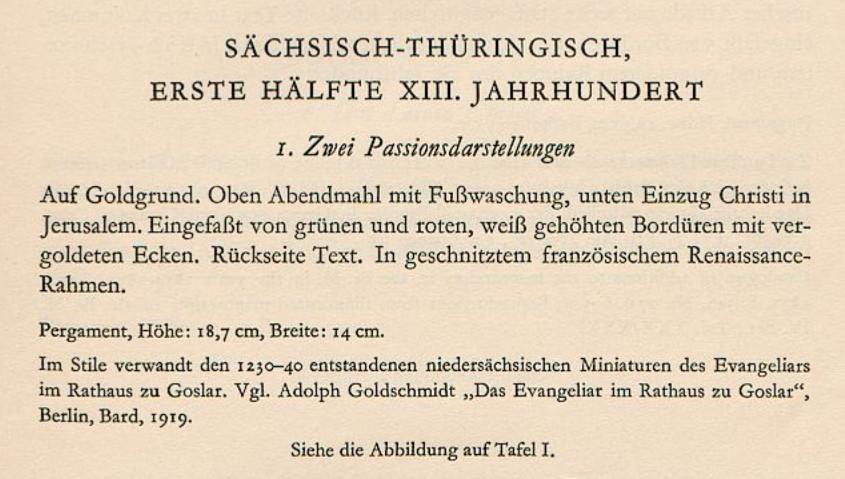 The catalogue has a Foreword by M.J. Friedländer, who presumably did the cataloguing.

The leaf was also published in the year of the Drey liquidation sale, along with three others, by Hanns Swarzenski, Die lateinischen illuminierten Handschriften des XIII. Jahrhunderts in den Ländern an Rhein, Main und Donau (2 Bd., Berlin, 1936), pp.49 and 121 no.39 figs.496-499, as follows: 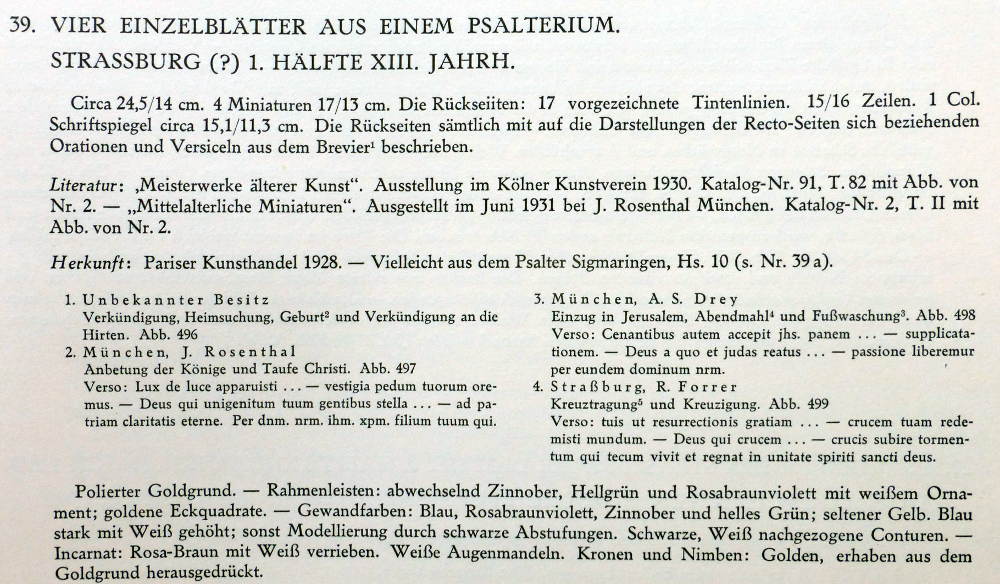 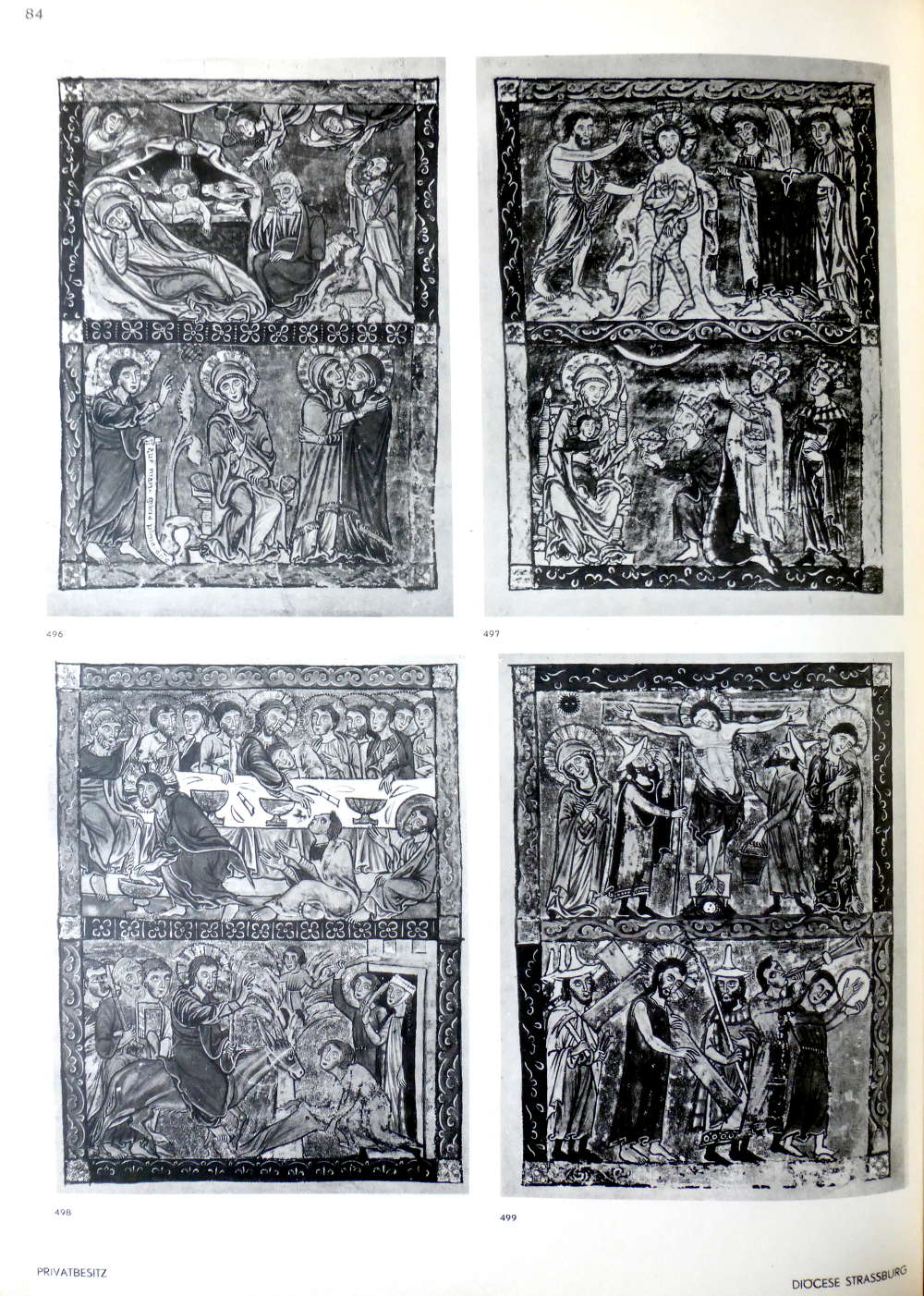 Of these four, No.2 had been offered for sale by Jacques Rosental in his catalogue Mittelalterliche Miniaturen, issued in June 1931: 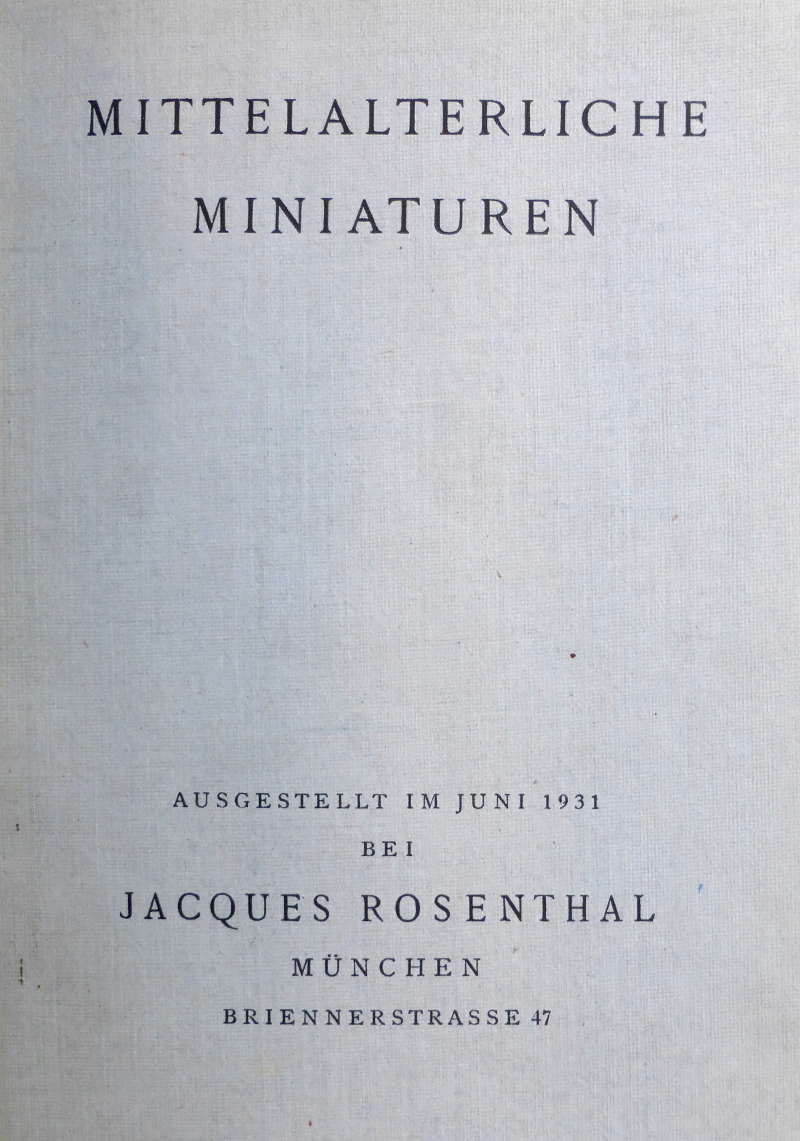 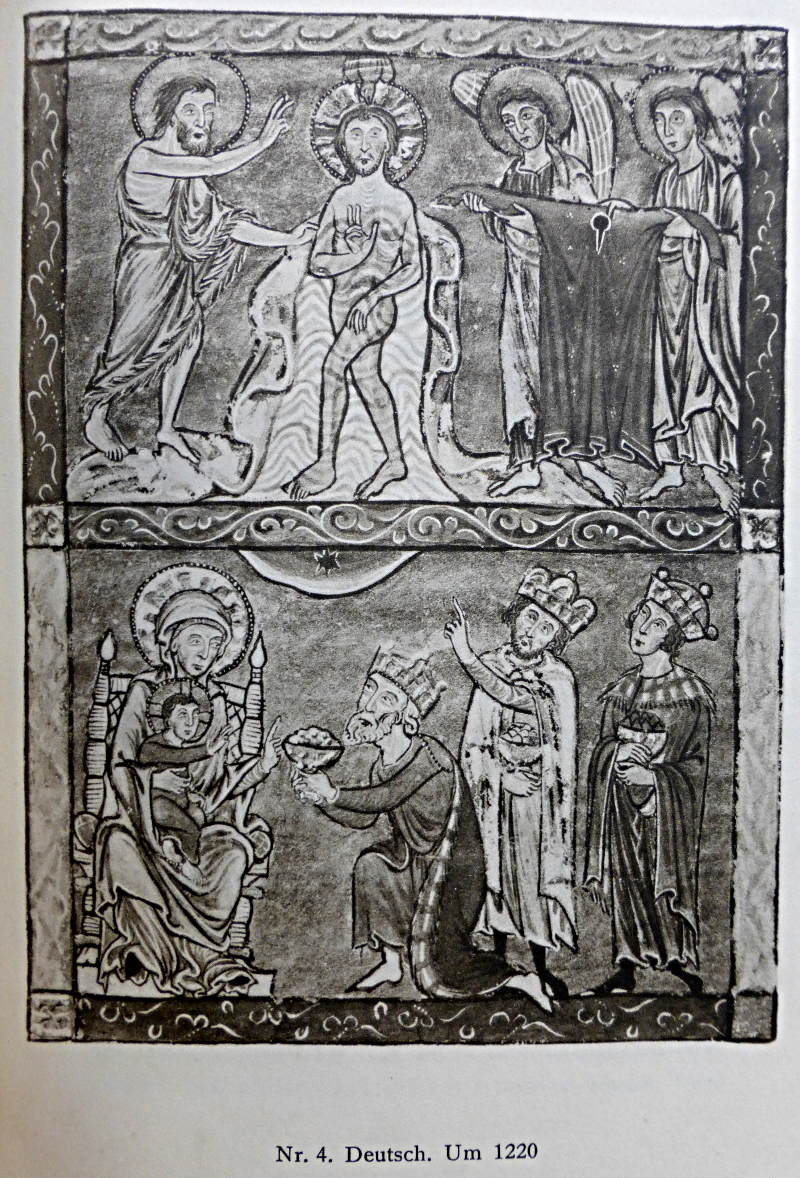 It has since turned up in the Liberna Foundation (now part of the Draiflessen Collection), to which it has belonged since 1942, and it was published recently in the exhibition catalogueVon der Schönheit der Präzision: Faszination Buchkunst und Grafik mit der Liberna Collection. Ausstellungskatalog (2012), no.016: 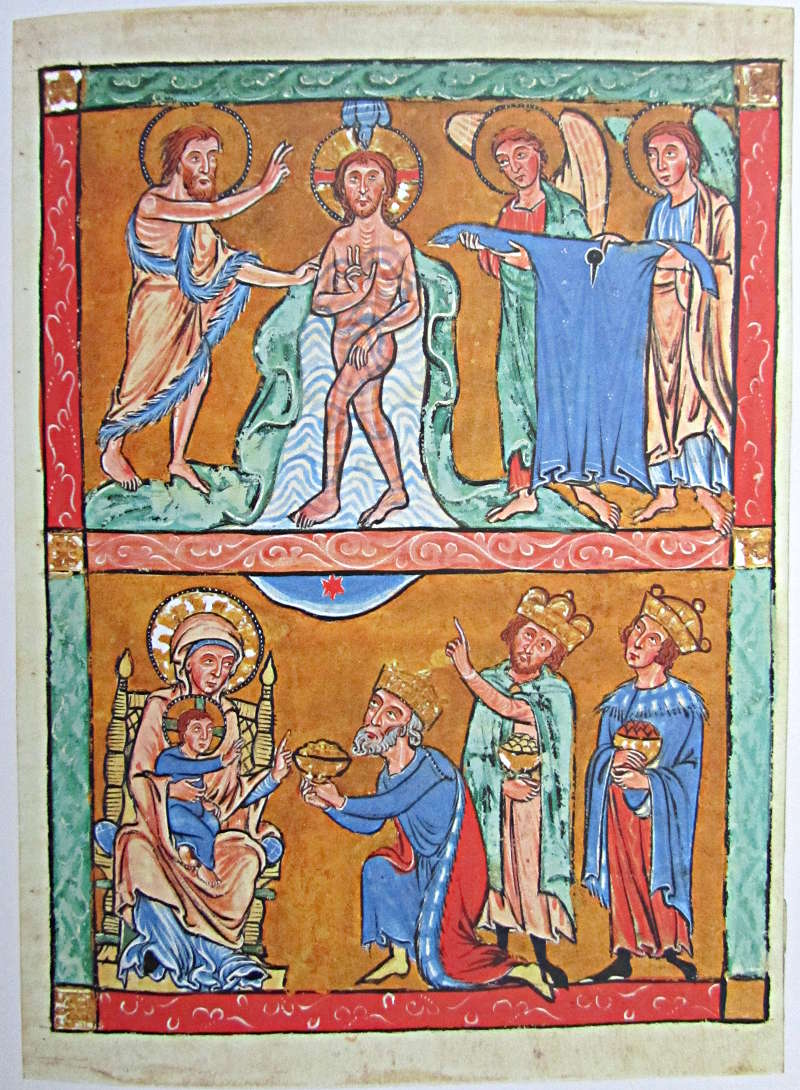 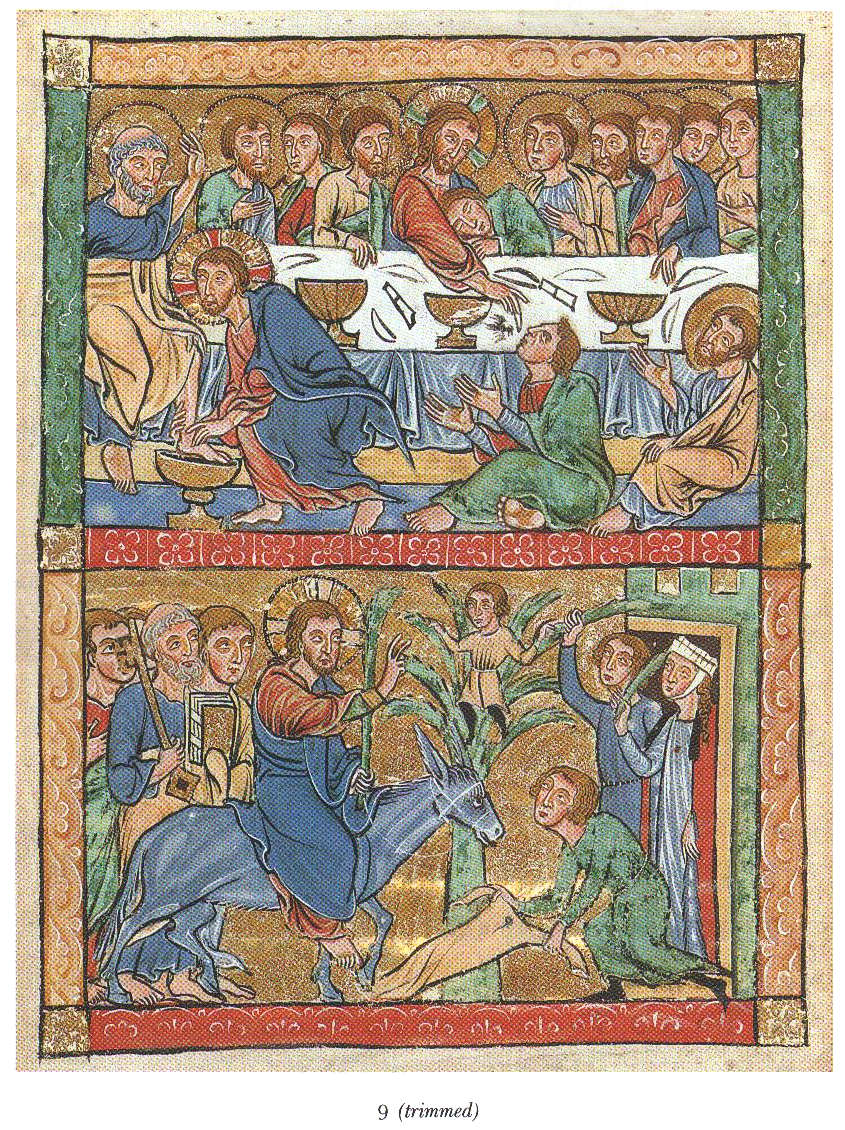 While planning for my upcoming trip to Philadelphia I was browsing the website of the Barnes Collection, and realised that one of their leaves is a previously unknown miniature from the same series: 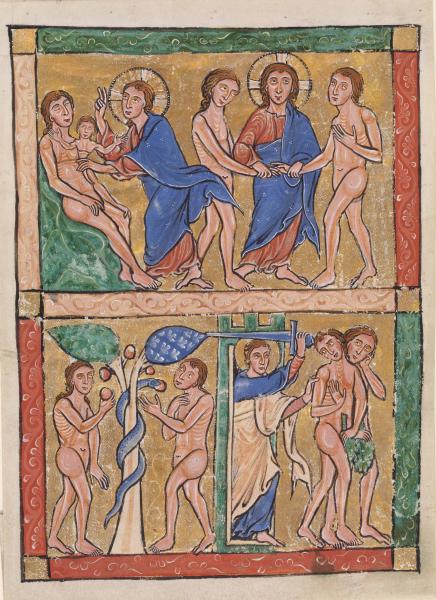 The two main differences between this newly-recognised miniature and the four that were previous known, are that (i) it is the only one that depicts Old Testament events, and (ii) it is to be read from top to bottom, as normal, unlike the other four, which have to be read from from bottom to top. These differences cast some doubt on whether it came from the same manuscript: it might be by the same illuminator, but from a different book.

Any doubts were dispelled, however, when Judy Donovan of the Barnes Foundation kindly informed me that their leaf had been bought from Jacques Rosenthal of Munich on 11 December 1930, and sent me an image that shows that its blank upper and lower margins have been folded backwards, in exactly the same way as the Liberna Foundation leaf, and they have the same script and decorated initals:
In subsequent correspondence with the Barnes Foundation I obtained images of the very few medieval manuscript leaves that were not already on the website, and was delighted to find that they also own Swarzenski No.1, whose whereabouts have been unknown since before he published his book in 1936: 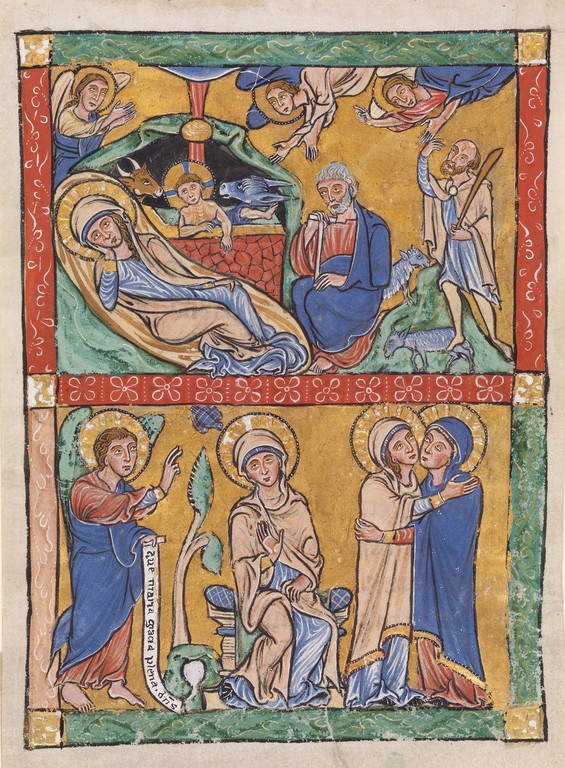 It is possible that there were only ever five such miniatures that survived from the Middle Ages until 1930, but the chances are that strong others await discovery, especially now that we have established that the series included at least one Old Testament leaf. I will of course be interested to hear from any readers who know of any further miniatures from the set. The only one of the four published in 1936 that has not been seen recently is No.4: 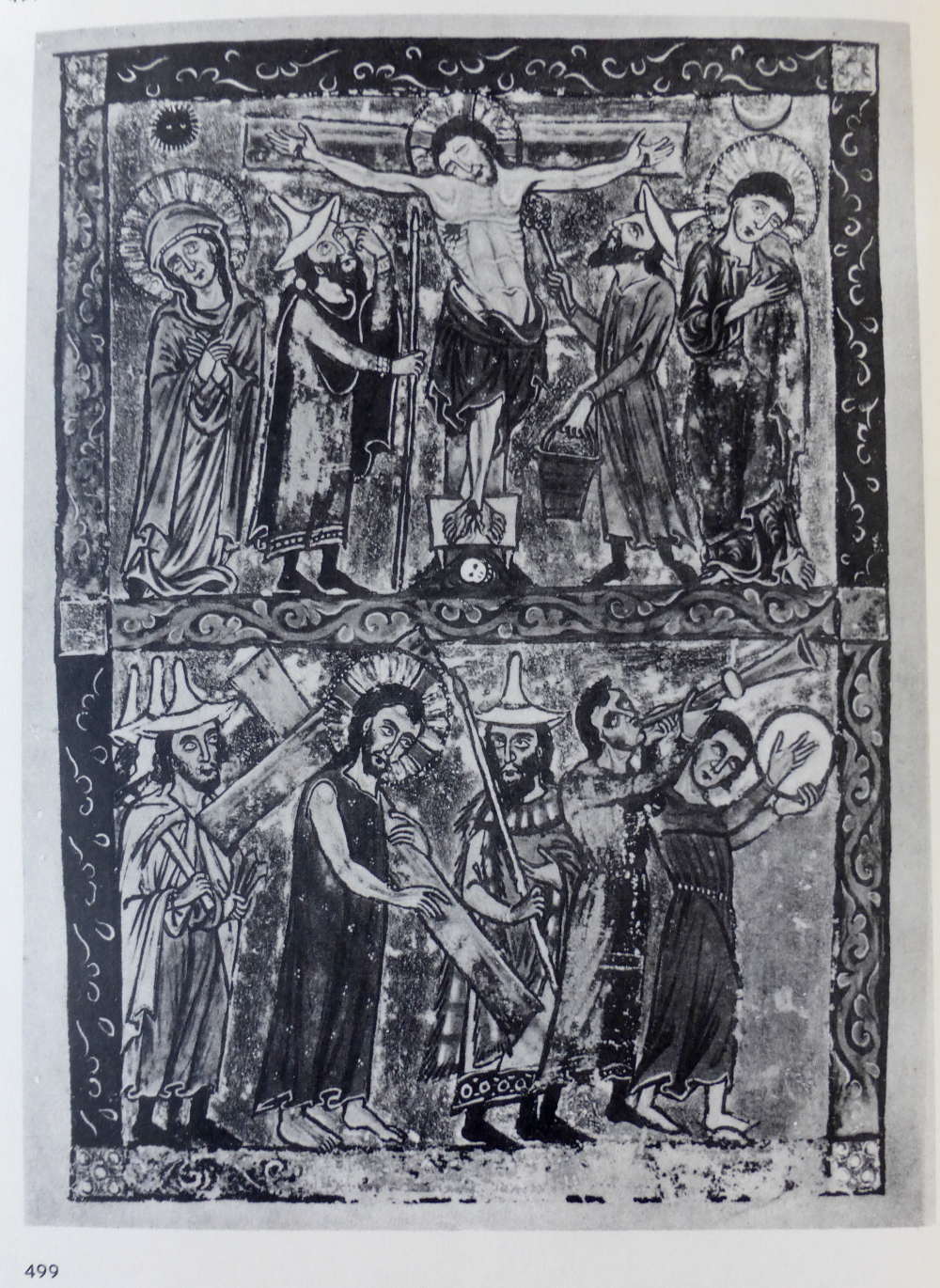 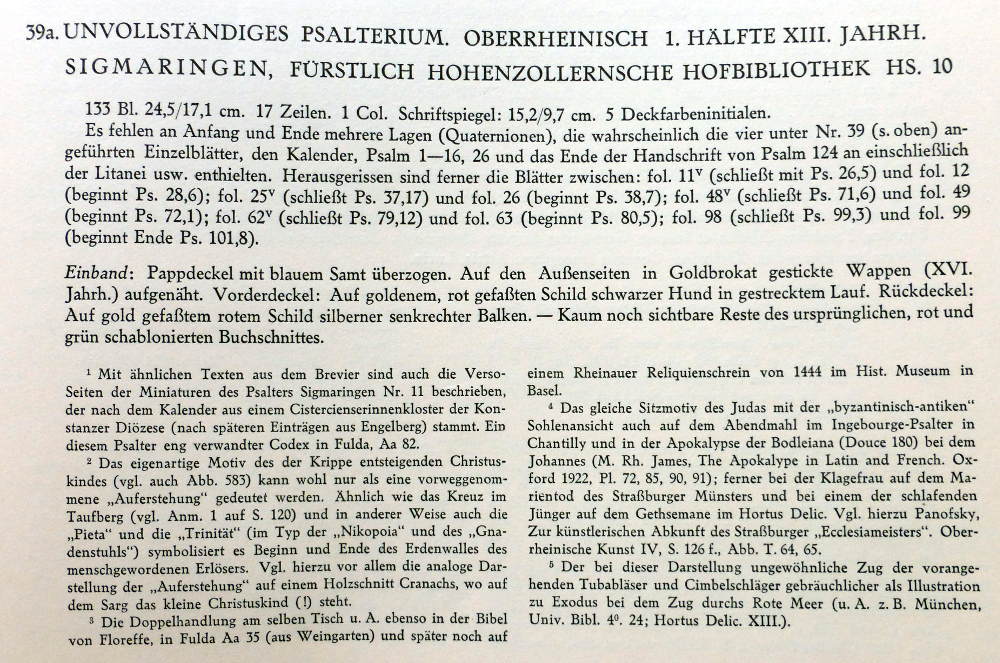 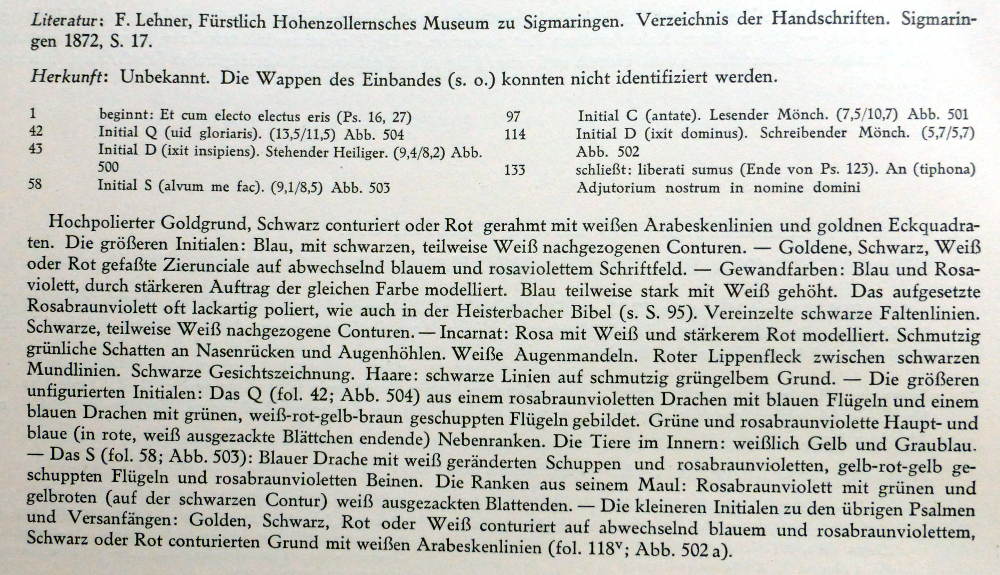 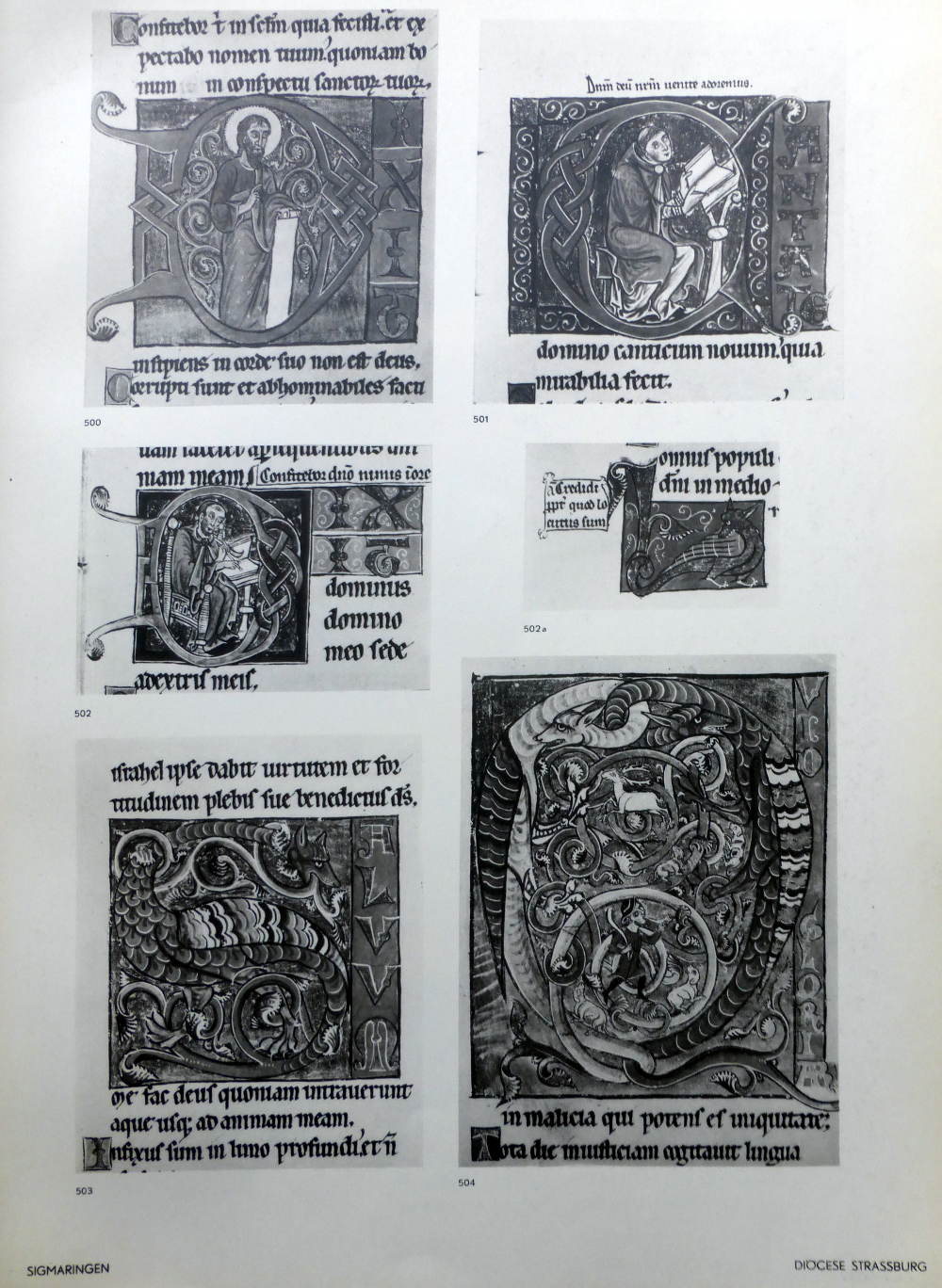