After reading the blog post about a manuscript in Liège with the arms of Jean(?) Budé, Dominique Vanwijnsberghe kindly told me about a late 18th-century illuminated leaf, added to a late 14th-century manuscript in the Morgan Library, New York (MS G.32, of which there are images and a description online), which also has the Budé arms half-way down the right border.

Visiting me in London a few weeks later Dominique very kindly gave me a copy of his excellent book, “Moult bons et notables”: L’enluminure tournaisienne à l’époque de Robert Campin (1380–1430) (Leuven, 2007), in which the image below is fig.285.
This use of the Budé arms is interesting enough in itself: it suggests that the bookseller or whoever commissioned this fake/replacement for the missing first leaf of the Morgan manuscript had another manuscript with the Budé arms, from which he copied.

Something else was even more interesting. François Avril had told Dominique that the image was copied from another manuscript, sold at auction a few times (including Christie's 23 June 1976, lot 216, and Christie's 25 June 1980, lot 232). I recognised it as a manuscript I had catalogued in the early 1990s for a previous owner (a somewhat revised version of my description later appeared in Bruce Ferrini and Les Enluminures, Important Illuminated Manuscripts (Akron and Paris, 2000), no.20 pp.115–22). It now belongs to Elizabeth J. and James E. Ferrell, who allowed it to be digitized for the Roman de la rose Digital Library, and have placed it on deposit at the J. Paul Getty Museum, Los Angeles: 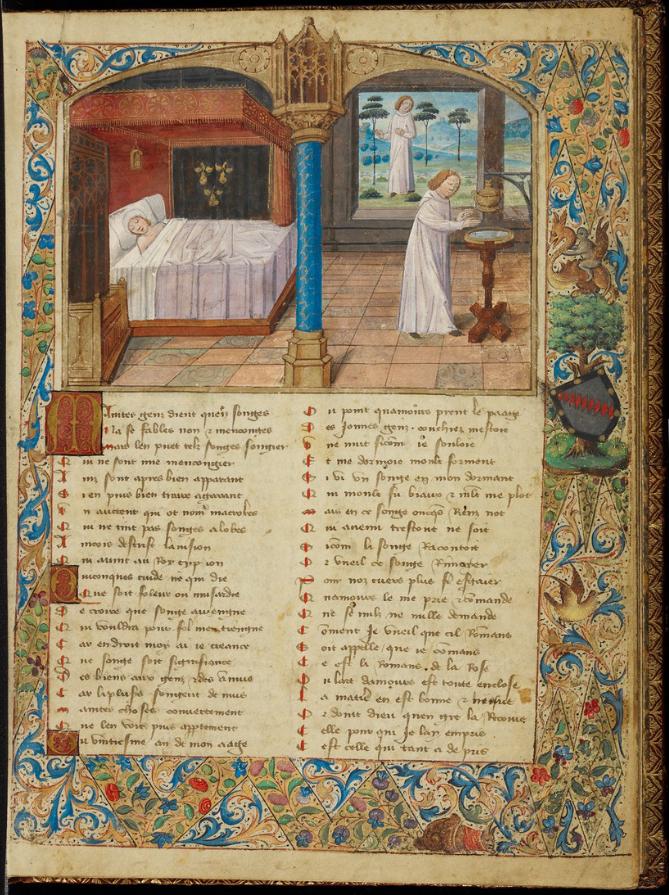 There can be no doubt that one is copied from the other: 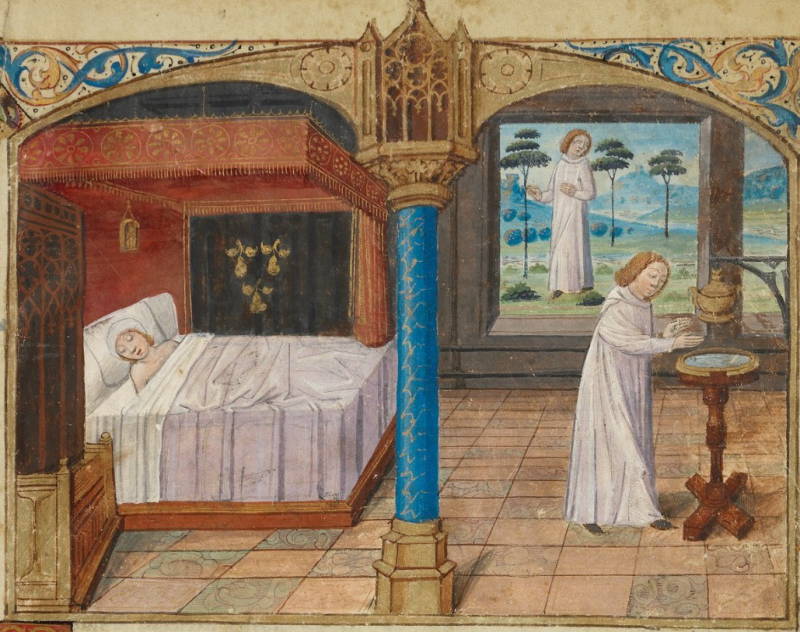 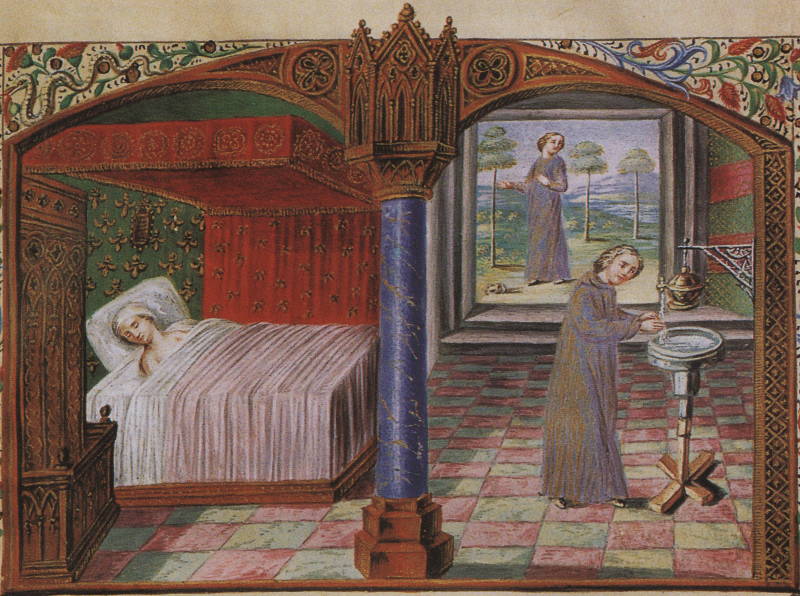 In the Ferrell manuscript, however, the place occupied in the Morgan manuscript by the Budé arms has different heraldry: 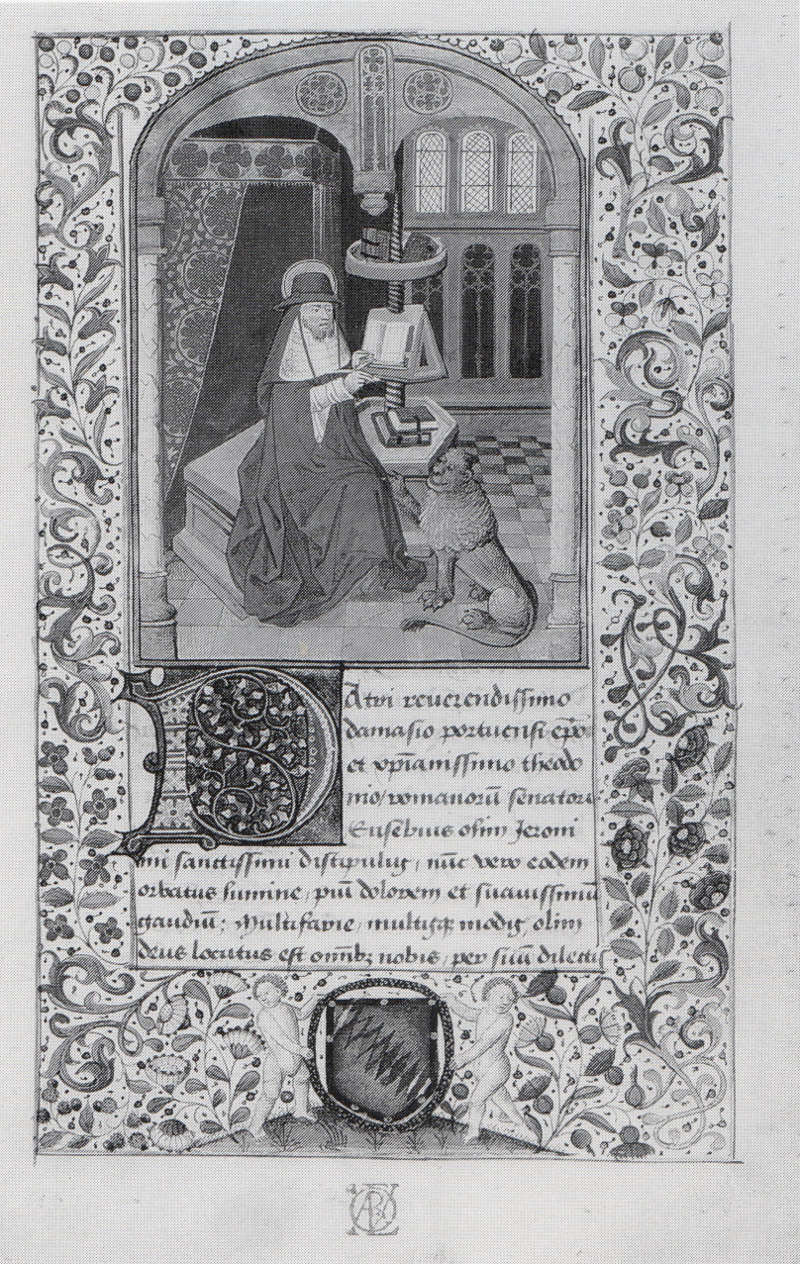 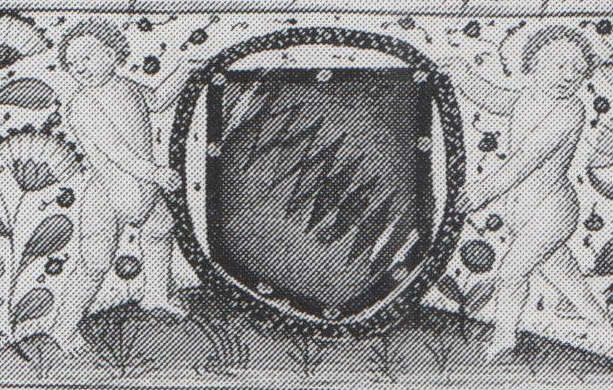 Thus the arms in the border of the Ferrell manuscript are safely identified, but there remains a strange puzzle. In the opening miniature, there is on the rear wall behind the sleeping Lover, a group of three gold fruit, apparently pears, each with a stem and two leaves: 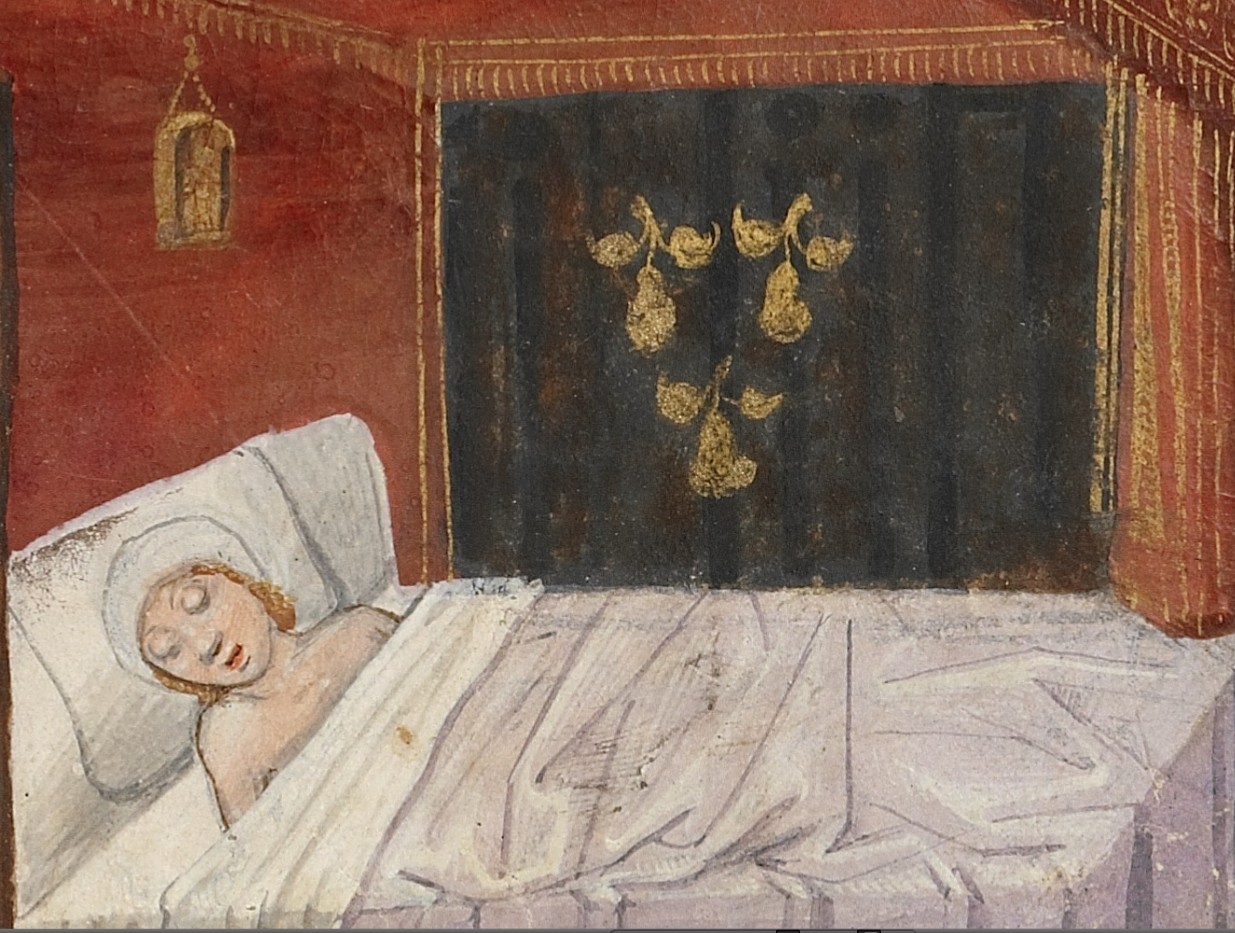 These were apparently mistaken, or re-interpreted, by the 18th-century copyist as  a semé of upside-down fleurs-de-lis embroidered on the bed-hangings: 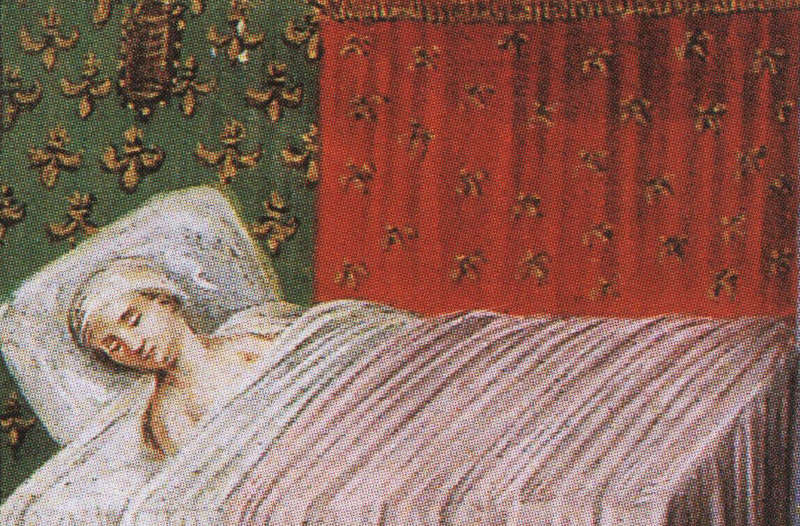 It seems hard to doubt that the gold fruit are heraldic, however, as they appear in several of the subsequent miniatures, almost always on a dark blue background, including twice on shields: 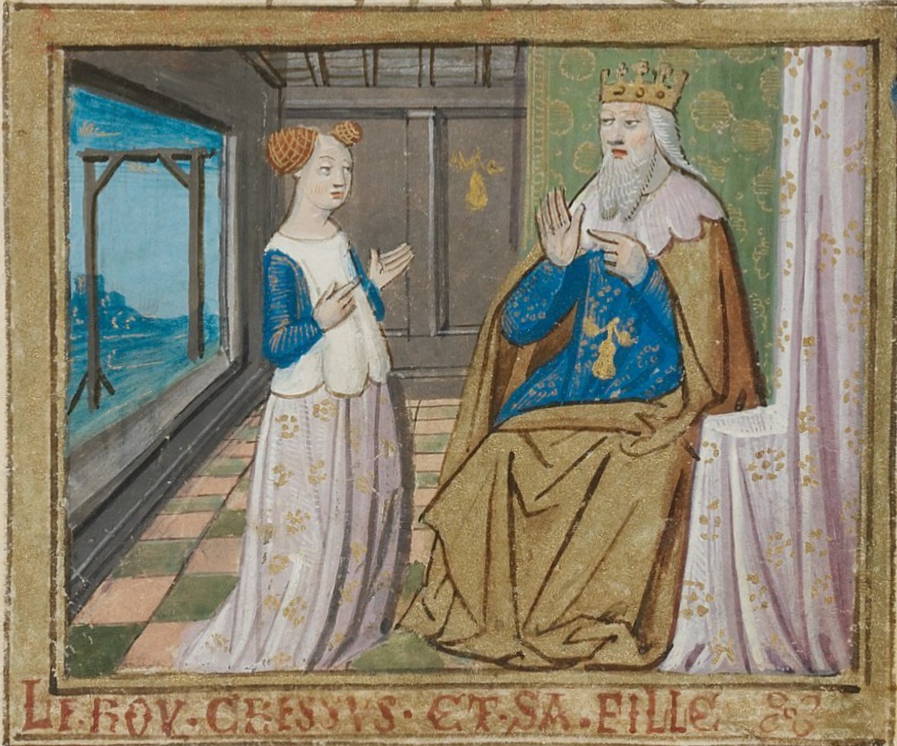 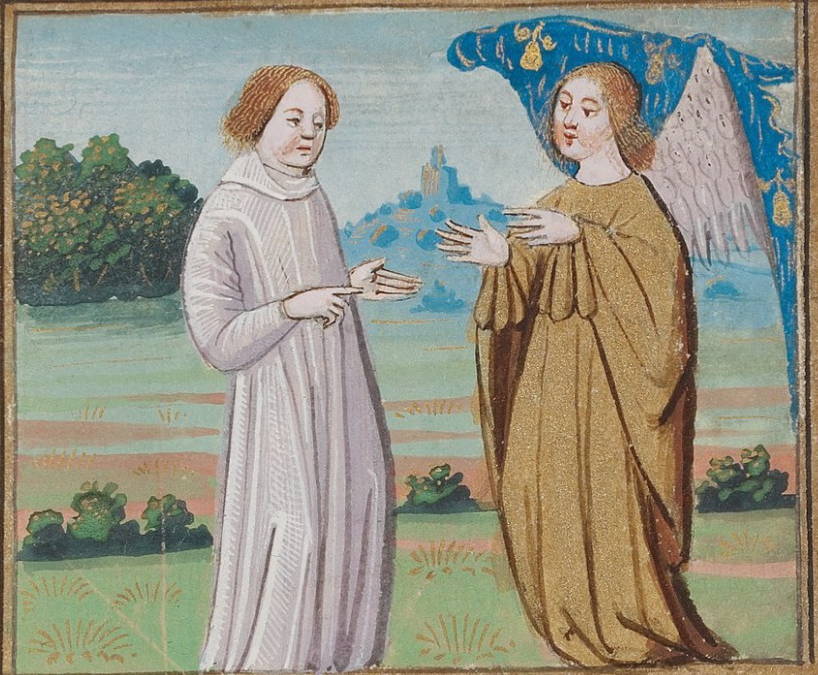 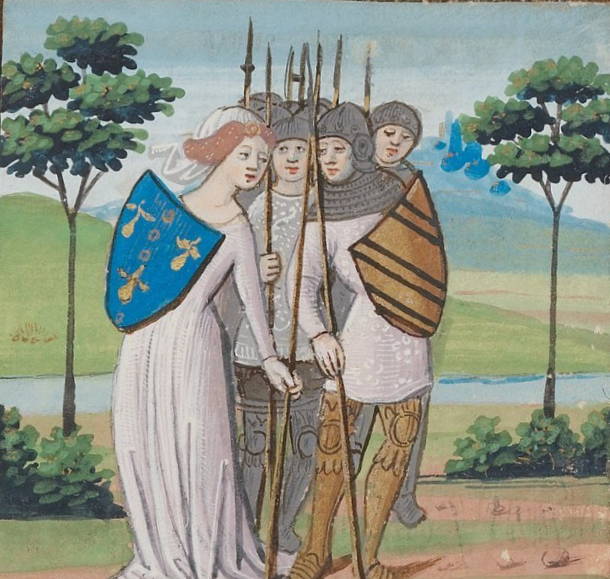 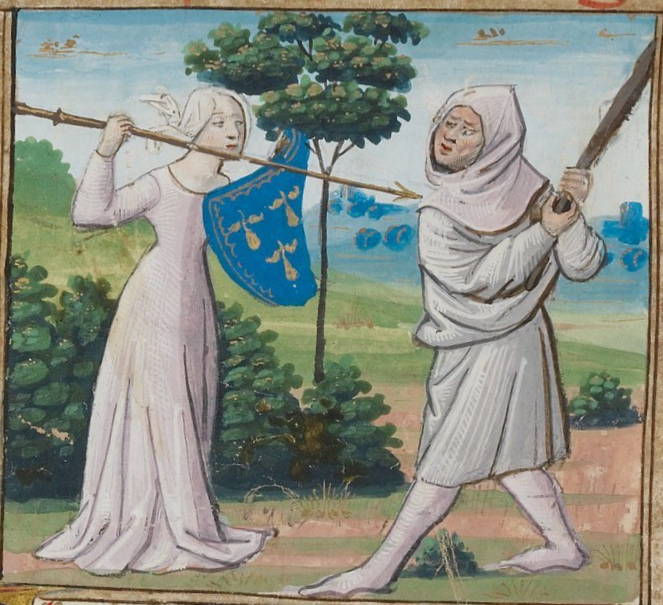 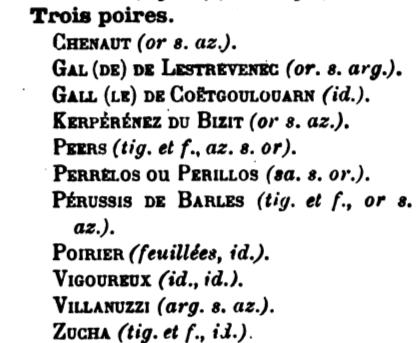 But as can be seen in Renesse, very similar arms were used by a few other families such as the Poirier and Vigouroux, and they may have been used by other branches of the Pérussis / Peruzzi / Peruzzis family. The arms appear c.1480 on the Pérussis Altarpiece at the Metropolitan Museum, New York, for example:
If any readers have any alternate suggestions for the presence of the pears/arms, or a connection between with Pérussis and Bourré families, I would be very glad to hear them.
Posted by Peter Kidd at 10:59