Just a few days after publishing the previous post I happened, by pure chance, to discover that a preliminary draft of the long-awaited continuation of Munby and Coral's work has very recently been made available online thanks to Annette Fern. It had been on the website of the Bibliographical Society of America for less than a week, and there has not yet been a formal announcement.

It consists of a chronological list of about 17,500 different catalogues of sales from January 1801 to December 1900, and locations of extant copies of those catalogues in about 150 libraries in the UK and USA.

Here is a direct link to download the PDF, which is about 15Mb in size and nearly 4,000 pages in length.

As Lenore Coral explained in 1995:


“What can you expect when I am finished? First, a chronological list of all the auction sales catalogues known to me, with fairly full transcriptions of the titles—fuller than those in the first volume. The main entry will include the names of all known consignors, whether printed or written in the catalogue or from information I have found in auctioneers’ records ... the identity of the auctioneer, the place of sale, the number of pages and lots devoted to book materials, and all locations of the catalogue known to me with shelf marks where available. Priced and annotated copies will be indicated.”

She did not live to see the project to completion or into print, but the present PDF will be an enormously useful tool—probably more so than any eventual hardcopy edition.

Happily, the new list includes the catalogues of the Department of Manuscripts at the British Library, whose exclusion from the printed 1915 List I lamented in the previous post.

Here, to give two examples, are the entries for the 19th-century Talleyrand sales, which I used as examples in the previous post:

Note that in both these entries a few shelfmarks are underlined, indicating that they are priced copies; these include the BL's "S.C.S." master copies, and it goes without saying that the microfilmed copies of these also provide prices and buyers' names.

The microfilm references are also given, which can be very helpful in ordering them, depending on the cataloguing and ordering system in use by the holding library. At the British Library, for example, to request a Sotheby's microfilm as a surrogate for the original, one has to visit the Reading Room in person and consult a typescript concordance to find the shelfmark of the microfilm reel you want; whereas one can to order the original volume in advance using the online ordering system, with just "S.C. Sotheby's" as the shelfmark, and the date of the catalogue you require: 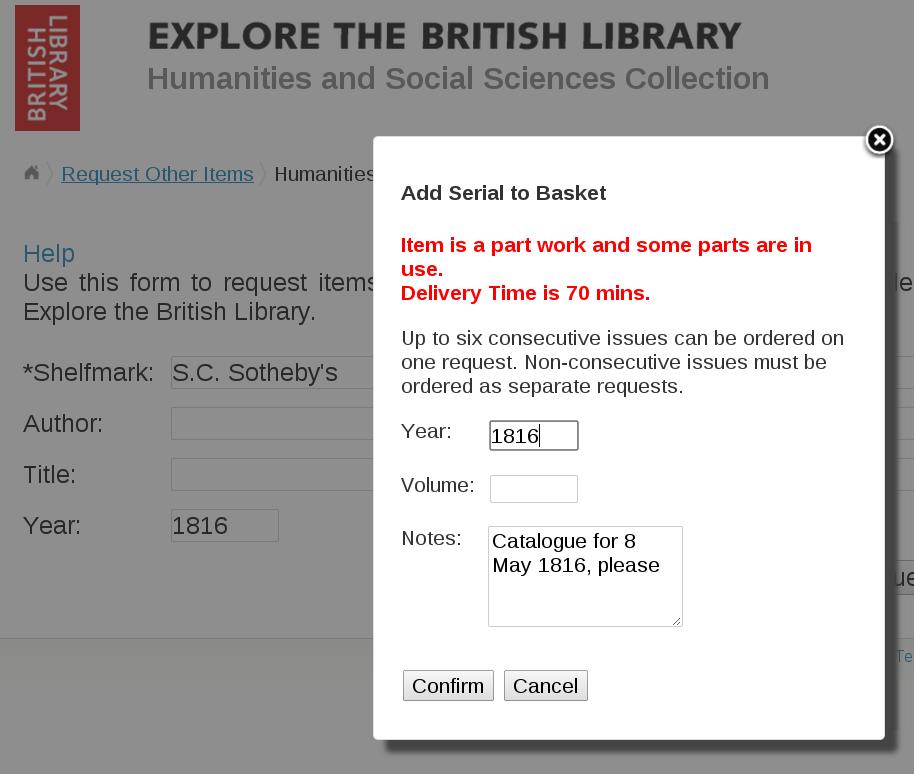