Miniatures from the Loredan Hours

Four miniatures from a Book of Hours illuminated by Willem Vrelant and the Fastolf Master (now Paris, Bibliothèque de l'Arsenal, ms. 575), have recently come to light. The manuscript was the main subject of James Douglas Farquhar, Creation and Imitation: The Work of a Fifteenth-Century Manuscript Illuminator, Nova University Studies in the Humanities, 1 (Fort Lauderdale, 1976). The manuscript was exhibited last year in the Flemish manuscripts exhibition in Paris.

The coats of arms below the miniatures have been erased from leaves which have been dispersed: 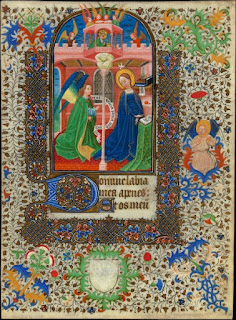 But most of those in the parent volume preserve the original heraldry: 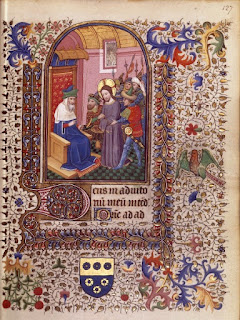 The arms are of the Loredan family of Venice.

The book later belonged to Suzanne de Milly, whose name is on the binding. Inside the front cover is the bookplate of the Abbé de Rothelin, who was the subject of a previous post. Farquhar suggests that the book was lot 270 in his auction catalogue:

Like many of the manuscripts now at the Arsenal, it was later owned by the Marquis de Paulmy.

One of the newly-recognised leaves contains the beginning of the Seven Penitential Psalms (which are missing from the parent volume), now at Chapel Hill: 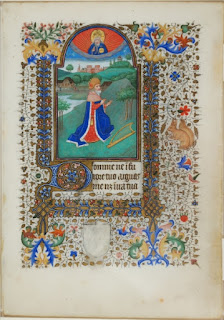 The suffrages are also missing from the parent volume; a second leaf contains the beginning of a suffrage to St John the Baptist, now in Honolulu: 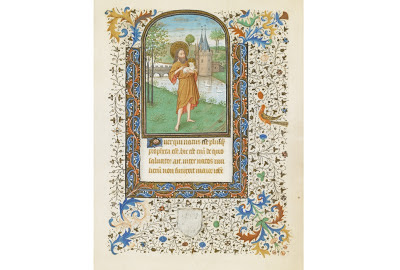 A third contains the beginning of a suffrage to St Clare (which accords with the Franciscan calendar in the parent manuscript), now at the Indianapolis Museum of Art: 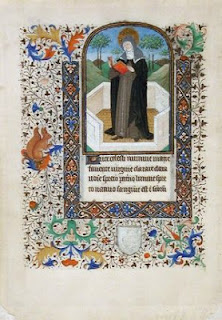 The fourth contains the beginning of a suffrage to St Eustace, and was sold in the third part of the Arcana Collection sale at Christie's, 6 July 2011, lot 5 (the image in the catalogue, not the leaf, was cropped):