A Reims Book of Hours written by Raulinus de Sorcy

A full set of digital images have recently been made available of a Book of Hours of the Use of Reims, now in Houston. It was alluded to at the end of a list of Reims Horae by Jean-Luc Deuffic in 2007, on his Pecia blog, and has recently been blogged about at Houston. 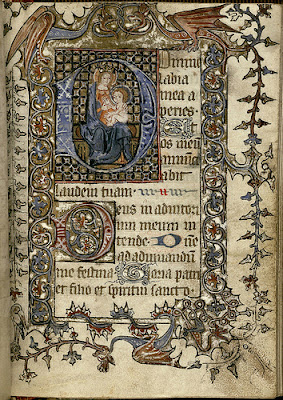 Following the gospel extracts (fol.15r) is the scribal colophon: 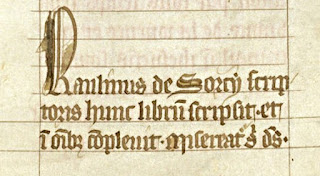 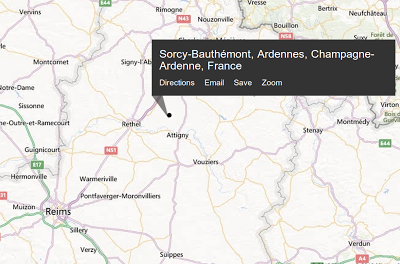 The Prime and None antiphons and capitula indicate the Use of Reims:
Prime
None
The Litany also includes indicative Reims saints, such as Rigobert, Basolus, Bova, and Doda, followed by petitions and an unusually long series of collects, including one naming the Reims saints Nicasius, Agricola and Vitalis (the church of St Nicaise was built on the site of one dedicated to Agricola and Vitalis): "... sanctorum martyrum turorum Nichasii, Agricole, et Vitalis, et omnium sanctorum ..." (fol.127v):

It has the bookplate of "Joseph Beard / Alderley", with his crest inside a garter bearing the motto "VIRTUS SEMPER VIREDIS" (front pastedown), which appears in the catalogue of the Franks Bequest as no.1922.

The manuscript appears in a Sotheby's sale catalogue of 8-11 November 1858 as lot 383, as "The Property of a Well-Known Irish Collector":

And was by 1895 owned by "Old John Cronin", "A Queer Bibliomaniac" and antiquarian bookseller of 221 Hoyt St, South Brooklyn, NY, who had some strange ideas about the book's date and provenance:

I do not know when or how it reached Texas; it does not appear in de Ricci's Census or its Supplement. There is a summary description in the Houston Library catalog.
Posted by Peter Kidd at 16:05