The Dispersal of the Collection of Rodolphe Kann

In a previous post about Edouard Kann, I alluded to my difficulty in understanding exactly how he was related to various other members of the family, including Maurice and Rodolphe Kann, and how his art collection related to theirs. Since then, I have read a few books about the Duveen family of art dealers, and these have provided me with answers. [1]

Today’s post includes very little about medieval manuscripts per se, but instead provides some background for two forthcoming posts, which will focus on the illuminations of Rodolphe Kann, and I think it also exemplifies the sort of fascinating behind-the-scenes machinations that can be revealed by investigating provenance.

Rodolphe and Maurice Kann were brothers, German-born Parisian bankers, and by the ends of their lives, each owned one of the finest art collections in France. Rodolphe’s collection (our main concern) included eleven Rembrandts, a small group of exceptional Italian paintings, more than a hundred lesser Dutch and Flemish paintings, and museum-quality bronzes, tapestries, old master drawings, ivories, and jewelled boxes.

The brothers lived in adjoining mansions on the upmarket avenue d’Iena in Paris, at nos. 49 and 51 (the latter was later the home of Calouste Gulbenkian):

For some time they planned a joint museum, and knocked down the adjoining wall between two of the upper stories to create an enormous gallery, but they later became bitter rivals and stopped speaking to one another. Rodolphe died in 1905 without making a will, which led to a dispute about who owned various prize items. Rodolphe’s son, Edouard, could not receive his inheritance until Maurice’s claims were settled.

The art dealer Nathan Wildenstein [2], who was a trusted friend of Edouard, proposed a solution which Maurice and Edouard both accepted: Wilhelm von Bode [Wikipedia] would research and catalogue both collections; he would be given access to both collector’s archives, and thus settle the questions of ownership as well as any questions of authenticity and attribution. Wildenstein would underwrite the cost of publication of a catalogue of Rodolphe's collection and in exchange would be given the option to purchase any items that might subsequently be sold. Wildenstein then did a side-deal with Henry Duveen, who agreed to meet the costs of the catalogue in exchange for a share of Nathan’s option to purchase items from the collection.

The catalogue is a lavish affair, in four huge volumes: von Bode catalogued the paintings in two volumes, and Jules Mannheim the objets d'art in another two volumes, including the manuscripts and illuminations, which were described by Édouard Rahir: 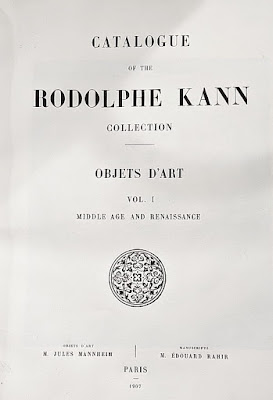 In 1906, with the preparation of the catalogue still in progress, Rodolphe died, and Edouard was named as his heir. About a year later, Edouard was persuaded by Wildenstein to break up and sell the collections, and a price of $4,000,000 was agreed. (The total cost to Wildenstein was to be $4,200,000 -- including commissions that he had paid to various intermediaries who had helped persuade Edouard to sell, and that the price was a fair one!) As he did not have anything like such a sum available, Wildenstein then struck another side-deal with the Duveens, who calculated that they could get $4,000,000 for just the Rembrandts and the furniture, meaning that everything else, including several hundred paintings, would be pure profit. They therefore made a deal with J. Pierpont Morgan: Morgan would pay an advance of $2,000,000, on condition that he got first pick of the collection.

The $4,000,000 was to be paid in two installments: an up-front payment of $2,000,000 on 1 August 1907 (this was covered by Pierpont Morgan’s advance), and the remainder within two years. During this time nothing could be removed from the house on avenue d'Iena, and the Duveens had to assume responsibility for the collection’s insurance and maintenance, but they were allowed to have sales staff living on the premises. Thus, what might on the face of it seem like an onerous burden, actually meant that they effectively had the use of a palatial showroom in Paris, rent-free, for up to two years!

In fact, the whole sum was raised within six weeks. For the $2,000,000 he had already paid, Pierpont Morgan selected two wings of a Memling triptych; a number of Dutch and Flemish pictures; and Ghirlandaio’s portrait of Giovanna Tornabuoni, which his son, J.P. “Jack” Morgan, Jr., subsequently resold to the Thyssen-Bornemisza collection:

Benjamin Altman [Wikipedia] took four of the Rembrandts, including a portrait of Titus, the artist’s son, for $500,000; it is now at The Met:

Philip Lehman, Calouste Gulbenkian, Baroness James de Rothschild, and a syndicate of other dealers each spent similar sums. Wildenstein selected paintings and bronzes at an agreed value of $400,000, as his share, meaning that everything else now belonged to the Duveens. On their behalf Bernard Berenson persuaded Isabella Stewart Gardner to buy this Pollaiuolo for $60,000, for example:

Arabella Duval Huntington née Yarrington [Wikipedia] (d. 1924), who was at that time the widow of Collis P. Huntington (d. 1900), (and from 1913 would be the wife of Henry E. Huntington), was persuaded to buy Rodolphe Kann’s collection of illuminations.

After her death, her son, Archer Huntington (d. 1955), sold them back to the Duveens, and they will be the subject of two subsequent posts.

[1] There are several books about the Duveens, but the most scholarly and reliable account seems to be Colin Simpson, Artful Partners: Bernard Berenson and Joseph Duveen (New York: Macmillan, 1986), Ch. 9; I have closely based my summary above on this, sometimes quoting phrases from it silently. I recommend it to anyone who wants to understand the highly unethical business relationship between Duveen and Berenson.

[2] Nathan [fr.Wikipedia] was the father of Georges [Wikipedia], who eventually owned many of Edouard Kann’s illuminations, now at the Musée Marmottan, Paris.