The Manuscripts of T. O. Weigel, II:
A Leaf In Cleveland


Among the leaves and cuttings attributed to Germany in the Weigel catalogue, the second (no. 9) is the 'title-page' of Gregory the Great's Moralia in Job, dated early 11th century. The imagery is described in some detail; in the upper half there is a scene of Job on the Dungheap and his three friends, and in the lower half is Pope Gregory and a tonsured deacon. 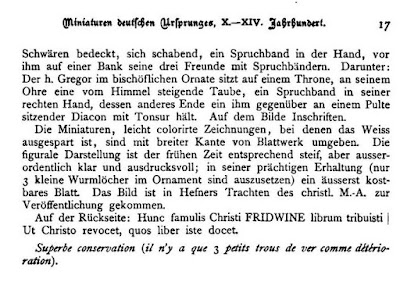 Crucially for our purposes, the Weigel description includes a transcription of a verse inscription on the back:


"Fridwine" is a sufficiently unusual name that it ought to be findable online, but a search on the name alone produces too many irrelevant hits, and a search on a phrase such as "Fridwine librum tribuisti" only produces one hit: a link to the digitized version of the present catalogue description.

This is one of the many circumstances in which access to an annotated copy of the catalogue is valuable. My copy (cf. the previous post) not only has a marginal annotation re-dating the leaf to the 12th century, but also one correcting the reading of "FRIDWINE" to "FROVWINE":

"Frovwine" produces five hits with Google, one of which seems highly relevant: it is a description of a 12th-century manuscript from Engelberg Abbey, Switzerland.

From this, it does not take long to identify the Weigel leaf as one now at the Cleveland Museum of Art (shown at the top of this post), and the parent volume as Engelberg, Stiftsbibliothek, Cod. 20, which is digitized and described here on e-Codices, including mention of the Cleveland leaf and a bit about its provenance, but apparently unaware of Weigel's previous ownership.

The e-Codices site also has images of both sides of the Cleveland leaf, so we can see why the reading of Frowinus's name caused trouble:

There is a short video about the leaf and the parent volume by Christophe Flüeller, of the Fragmentarium and e-Codices projects, on YouTube (in French).  A good deal is known about Frowin (d. 1178), who was abbot of Engelberg from 1142; his career is summarised in various modern biographical sources, and he even has his own Wikipedia page.

Not only does the Weigel catalogue allow us to trace the ownership of the leaf back to 1898, when the catalogue was published, and back to 1881, when Weigel died, but some way further. The catalogue mentions that an image of the miniature was published in J. H. von Hefner-Aleneck's book on costumes of the Christian Middle Ages:

This reference perhaps refers to the recent edition of the work, published in 1879: 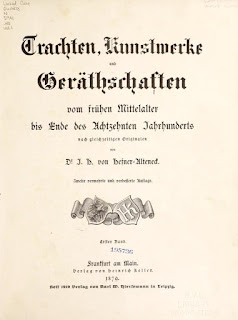 in which two details of our leaf appear (omitting the figure of Job, as he wears no clothes, and is thus irrelevant to the subject of the book): 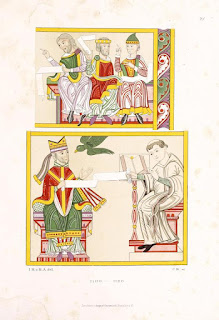 In the list of illustrations, the leaf is stated to be in the author's own collection in Munich: 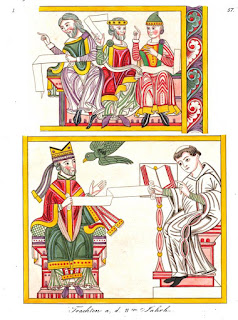 This takes us back much closer to the time when the leaf was extracted from its parent volume; it was still in situ in 1787 when a description was prepared by P. Karl Stadler.
Posted by Peter Kidd at 11:06