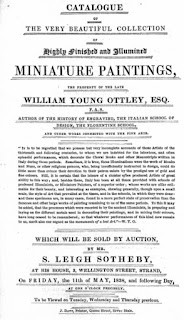 Having covered the origins of the cuttings at Vassar College from a Missal of Pope Leo X, from their creation to their dismemberment and auction in the 1838 Ottley auction, in a series of previous posts, it may be worth pursuing their provenance into more recent times.

Looking at the copy of the Ottley auction catalogue annotated with prices and buyers' names, we find the following names:

Some of these are immediately recognisable: Payne, who bought lots 222 and 224, was a well-known bookseller, for example.

"Rogers", who bought lots 223 and 225, was the poet Samuel Rogers (1763–1855), whose manuscript miniatures were sold on the eighth day (6 May) of the nineteen-day sale by Christie's of his house and its contents, beginning on 28 April 1856. Lot 998 doubtless represents two of the ex-Ottley cuttings:

"998  A pope, kneeling before an altar; and a priest, sprinkling holy water—illuminated miniatures"


"On February 22, at the age of seventy-five, died James Edward Nightingale, F.S.A., of The Mount, Wilton, Salisbury. Probably few men in England possessed a wider knowledge of mediaeval and renaissance art than he did; but his modesty and retiring disposition, and entire absence of assumption of knowing more than other people even on those subjects which he had made peculiarly his own, prevented those who did not know him from recognising how great his knowledge really was."

I do not know who "Lloyd" was (who bought lot 226), but in the copy of the sale catalogue annotated by Francis Madden is a note:


"The miniatures purchased at Ottley's sale by Mr Lloyd were afterwards sold to Payne & Foss. The best were selected & bound in a volume, and sold to Mr Holford for 200 gns [guineas]. The remainder were bound in two other volumes, & still remain in Messrs P. & F. hands. Dec(?) 1843"

These can be seen on the BL catalogue of illuminated MSS, but do not include any of the Leo X Missal cuttings.


"Another volume of miniatures, borders, went into Mr S. Rogers's hands, with several of the best miniatures of Buonfratelli. Lord Northwick also had a few. [signed:] F.M."


The cuttings now at Vassar were given by Ada Thurston.

Ada Thurston graduated from Vassar in 1880 and taught at several colleges before taking a year of classes at Pratt Institute's program of library studies. In 1905 she had been was hired by Belle da Costa Greene to work with her at the library of J. P. Morgan, and remained there until 1935. When Morgan died in 1913 she was remembered in his will: Belle received $50,000; Charles King, his private secretary, received $25,000; Ada received $10,000 (very approximately $200,000 in today's money); and all the other employees of the Morgan company received a year's salary. [1]

She lived at Poughkeepsie after retirement, and as an active alum donated many books and manuscripts to the college. She certainly gave five medieval illuminated manuscripts to Vassar by 1917, when they were listed in Mary M. Shaver, A List of Rare Books, Manuscripts and Autographs in Vassar College Library (Poughkeepsie, 1917). As this list includes a single leaf of a manuscript of the Aeneid, and a number of modern printed facsimiles (including a photograph of an Edgar Allen Poe manuscript, given by Thurston), it seems very probable that original leaves and cuttings would have been included if they existed at the library by that date, so we are probably safe to assume that the Leo X cuttings were given to Vassar between 1917 and Thurston's death in 1944.