A Leaf of Pietro Ursuleo's Psalter-Passion Sequences in Eagle Rock

The small collection of medieval leaves in Special Collections in the Library at Occidental College in the Eagle Rock area of Los Angeles has yet more interesting items to offer.

Among them is a leaf from a Psalter with Passion Sequences, written by the humanistic scribe Pietro Ursuleo of Capua (d.1483). 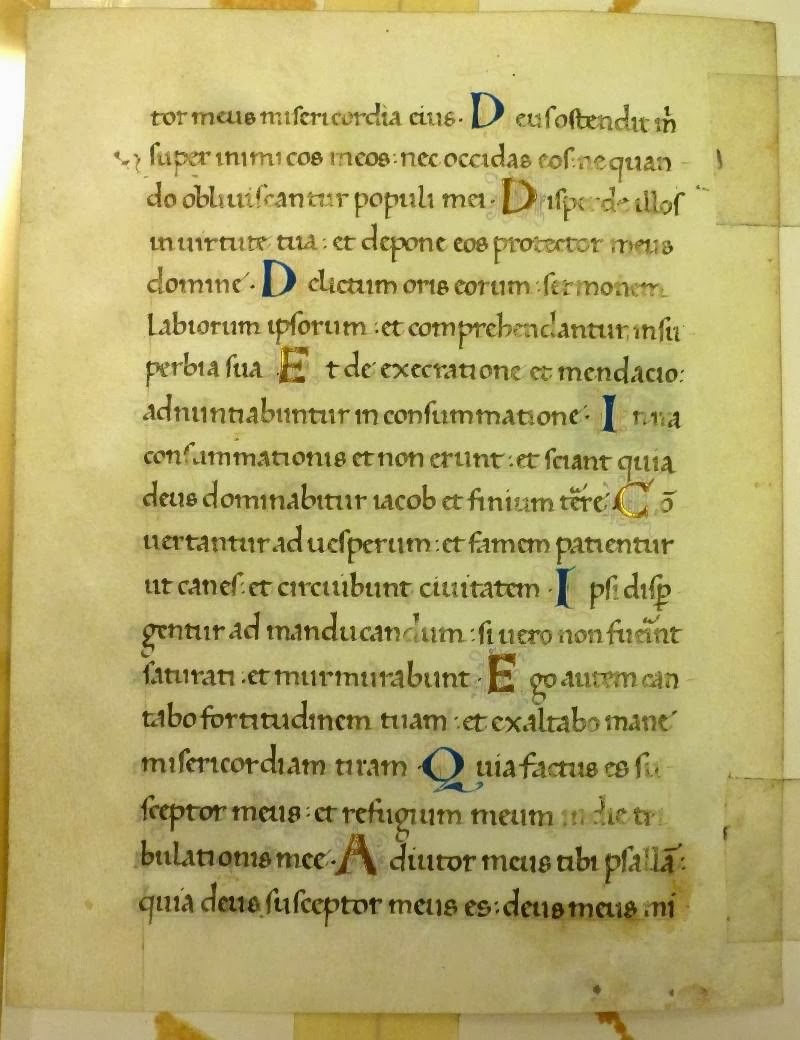 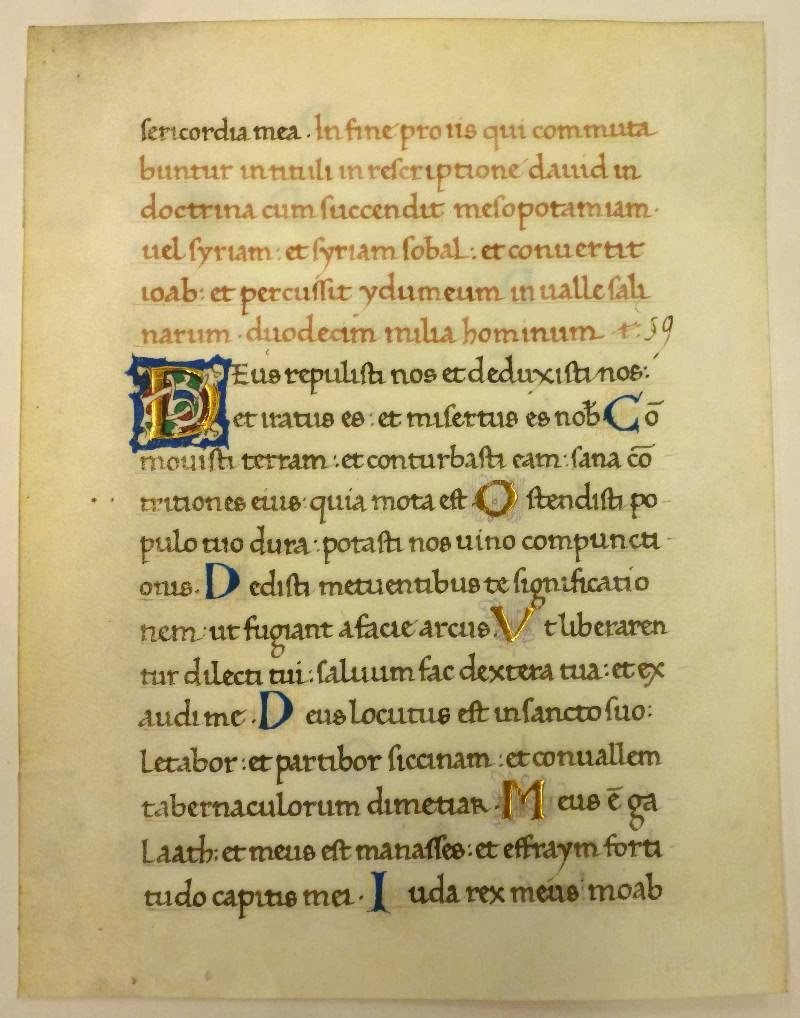 An oddity of the text, presumably simply a scribal error, are the opening lines on the recto, which insert two words:

and also omit six other words of the normal biblical text, presumably due to eye-skip from the first "Deus" to the second:

The parent manuscript presumably had a miniature at the beginning of each of the four gospel passages, of which that for Matthew is now in the Thomas Cooper Library, University of South Carolina (RBSC MS. 68; identified by Scott Gwara in A Census of Medieval Manuscripts in South Carolina Collections, 2007):
The miniature for Luke is known from reproductions: 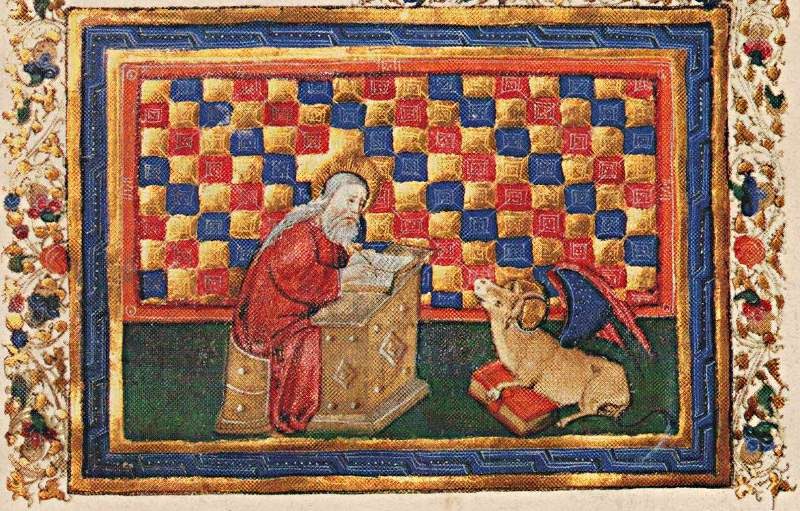 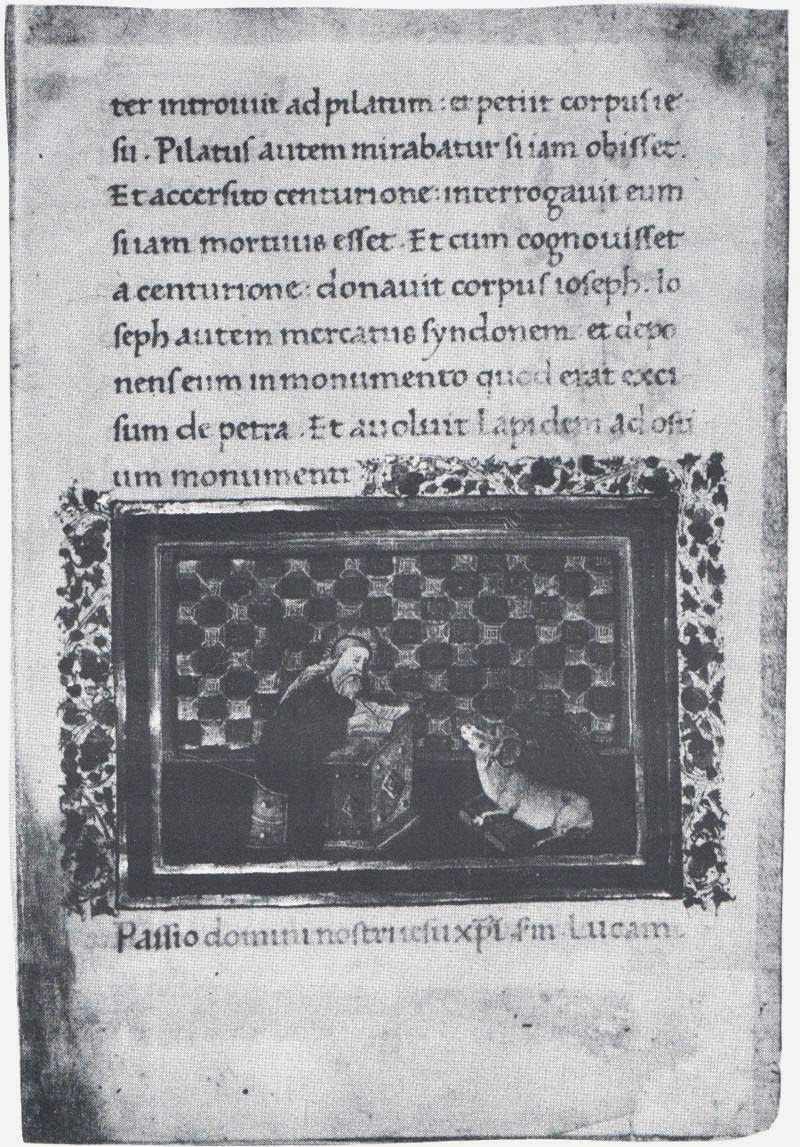 In the listing of known leaves published by Margaret Manion et al., Medieval and Renaissance Manuscripts in New Zealand Collections (Melbourne, 1989), no.89, pp.100-1 and fig.164, the Occidental leaf is doubtless the one described as containing "Psalms 58:18-60?: the cataloguer mistook the verso for the recto and assumed that the text on the other side continued into Psalm 60. They record its most recent known provenance as "Maggs, Bulletin 11 (November 1982), no.68", which I have not yet been able to consult.

I recently recognised another  untraced leaf from the book (not recorded by Manion et al.) in the collection at Huis Bergh, Holland, in time to have the identification included in Anne S. Korteweg, Catalogue of Medieval Manuscripts and Incunabula at Huis Bergh Castle in 's-Heerenbergh, 2013, p.71 no.21 (Inv.no.264 / fr.52); it contains Psalms 46:10-47:11 on the recto: 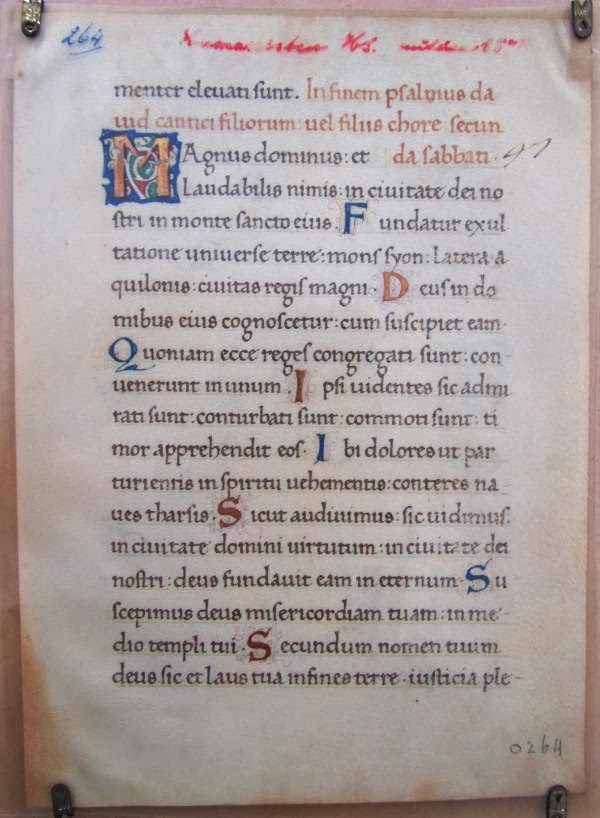 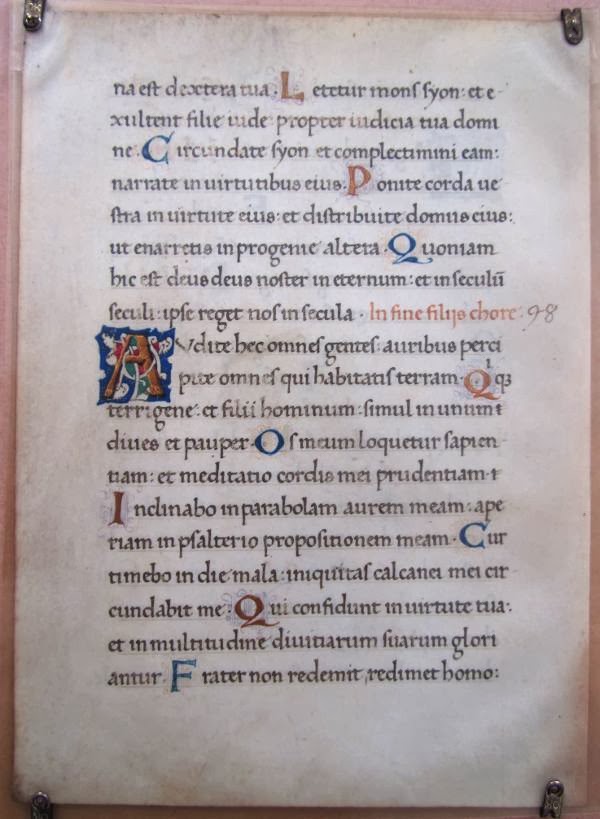 Two others not known to Manion et al. are in the V&A Museum: 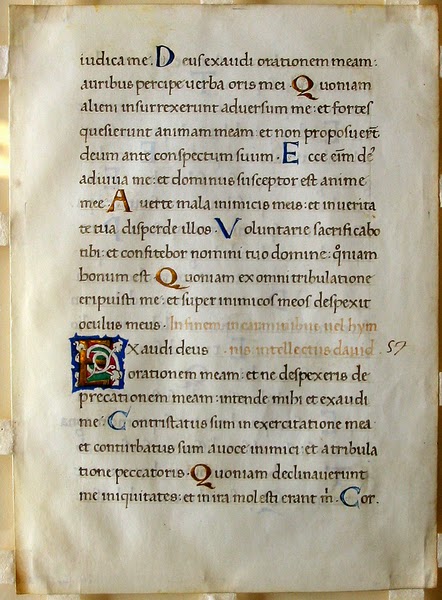 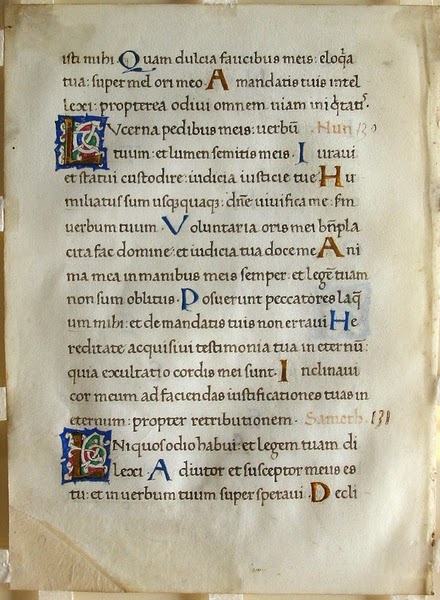 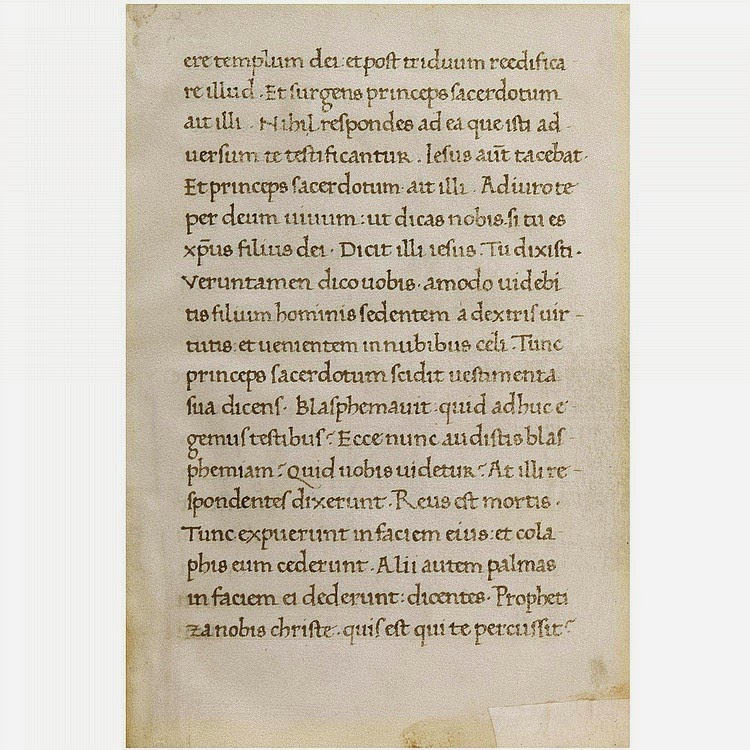 Thus, some additions to the Manion et al. listing are:

Although the combination of Psalter with Passion Sequences is unusual, there is a twin manuscript of these texts, also written by Pietro Ursuleo, now in Cambridge, Trinity College, MS. O.7.46 described here. It is discussed most recently in the Cambridge Illuminations exhibition catalogue, no.99.

Scott Gwara has kindly brought to my attention a leaf with an historiated initial, formerly owned by Maggs, illustrating the usual Psalter division at Psalm 97: 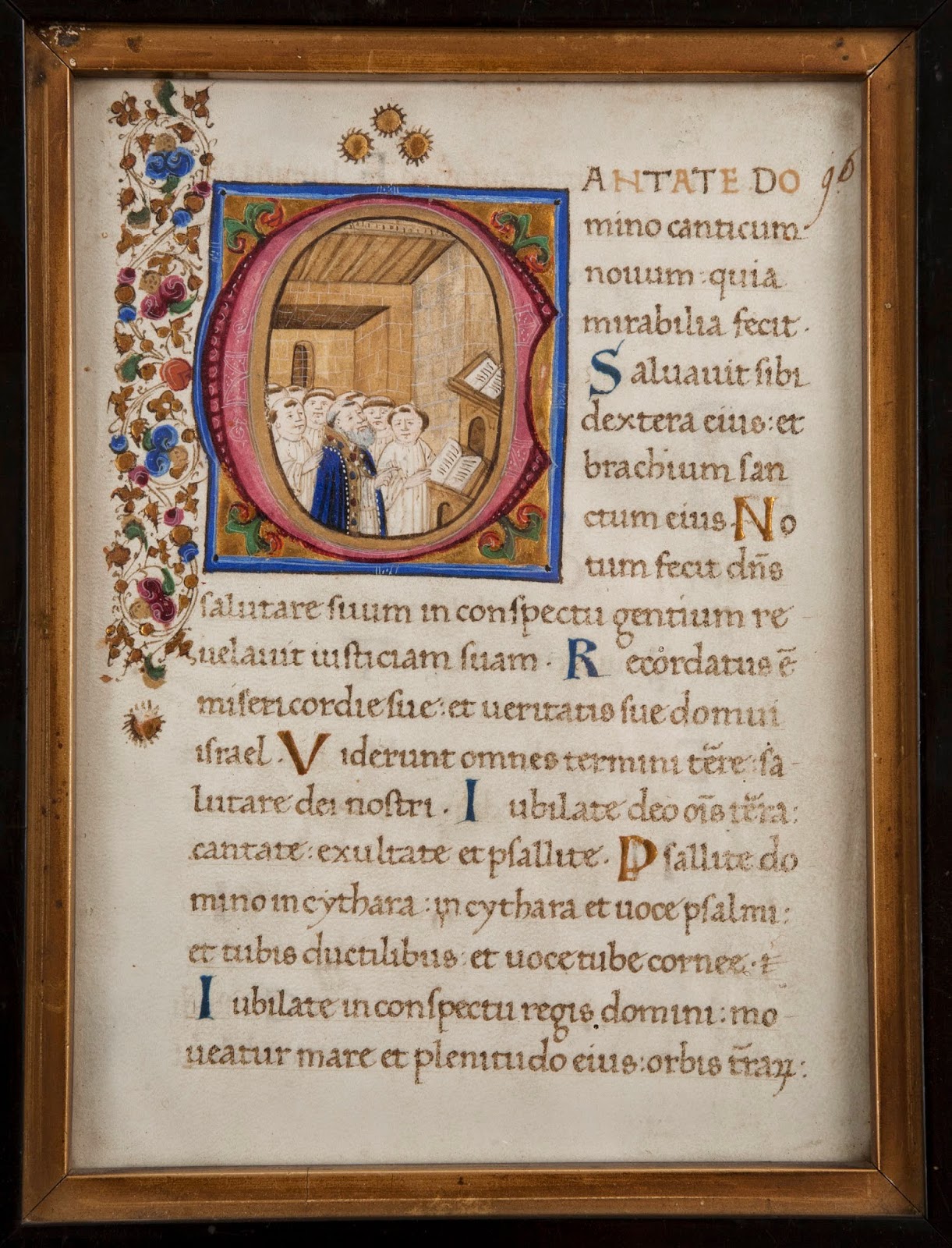 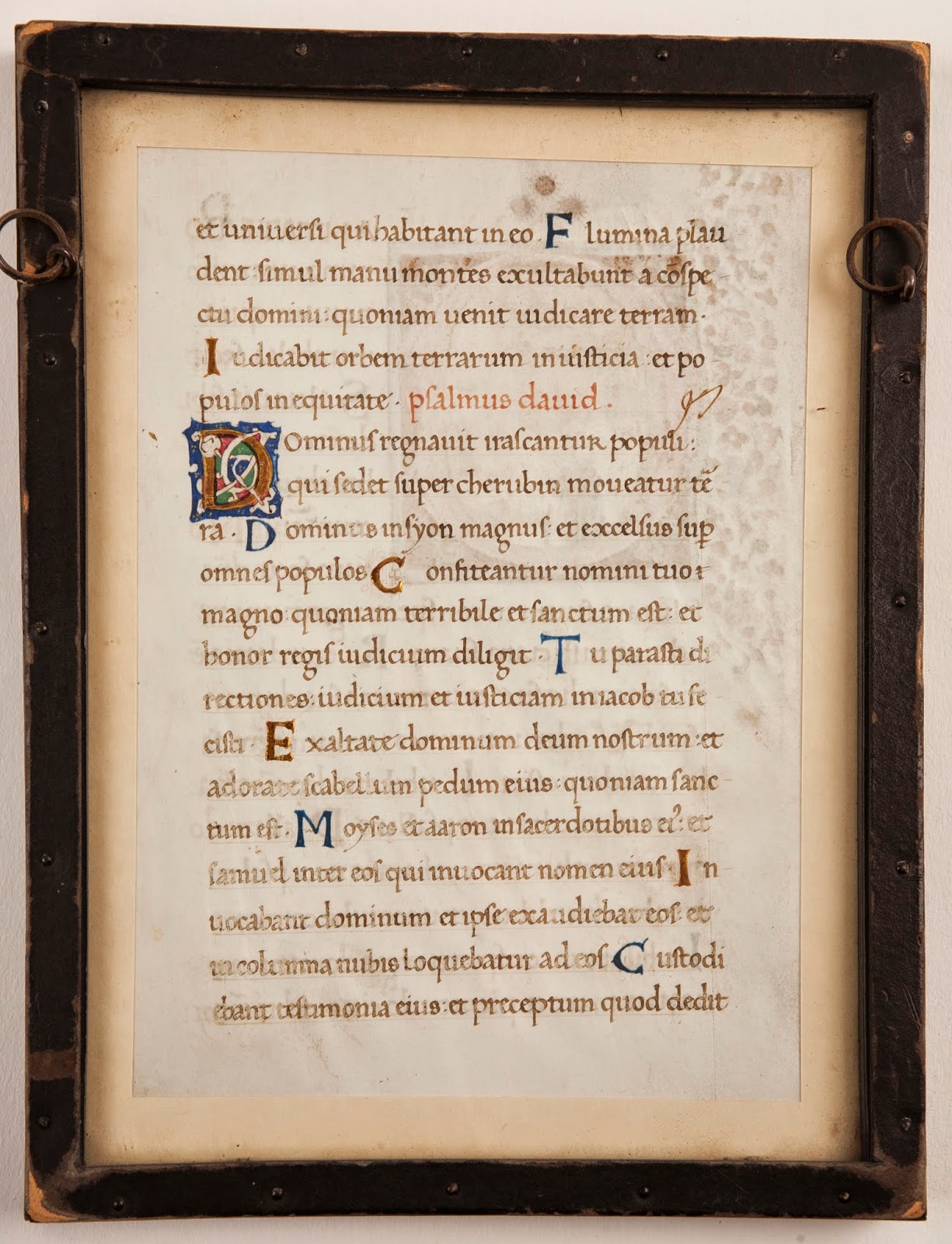 Bill Stoneman of the Houghton Library also contacted me, writing:

"The NZ catalogue includes the delightful story that the leaves there were ascribed to Pietro Ursuleo in 1972 by Albina de la Mare and she was proven correct a decade later when she found the colophon leaf in the collection in Canberra. Digital Scriptorium reveals another manuscript by Ursuleo is in the library at Columbia University in New York; presumably the ascription to Ursuleo is also the work of the now legendary Professor de la Mare."

The Columbia manuscript in Digital Scriptorium to which he refers is online here.
Posted by Peter Kidd at 09:33