Today I learned that there will be an exhibition in Florence next year, at the Galleria dell'Accademia, called La fortuna dei Primitivi: Tesori d'arte dalle collezioni italiane fra Sette e Ottocento, dedicated to 18th- and 19th-century Italian collecting of "primitives".

It will include a section about Lord Ashburnham and another about Matteo Canonici. This reminds me of a manuscript that sold at Bonham's in London a year ago: 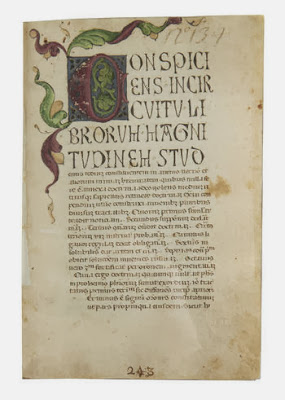 The foliation in the middle of the lower margin shows (not mentioned in the Bonham's catalogue) that it comes from the collection of Jacopo Soranzo (1686-1761): 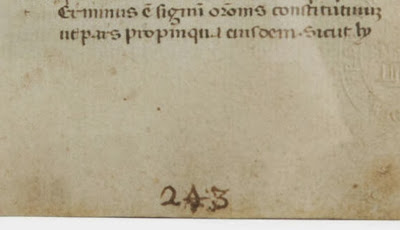 Here is the foliation on another page: And here is an example from another manuscript:
Soranzo's manuscripts were acquired by Matteo Luigi Canonici (1727-1806), from whom they passed to his brother, Giuseppe (d. 1807), and on the latter's death to Giovanni Perisinotti, from whom over 2,000 were bought by the Bodleian Library. Another group was sold at Sotheby's on 26 February 1821, and two following days: Saibante and Canonici manuscripts: a catalogue of a singularly rare collection of manuscripts on paper and vellum ... the whole are in fine condition, and were brought to this country by the Abbé Celotti

"Walter was so exhausted in God's ministry that he retired to a comfortable but busy indolence in his mid-twenties. He went on to collect rare books and manuscripts and established one of the most notable private libraries in the country" [source]

His manuscripts usually have his bookplate with the legend "Ex libris Gualteri Sneyd": 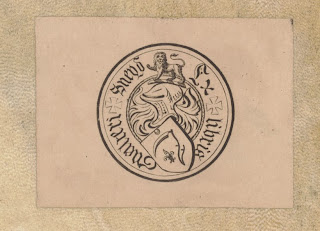 After Sneyd's death his manuscripts were sold at Sotheby's, 16 December 1903 and three following days.