A particularly striking example is provided by four initials on two consecutive sheets of the Lomax-Wade collection:

"Moses leading the Jews through the Red Sea, a monk praying in a chapel (f. 8), David and the Almighty, God the Father appearing to a group of saints (f. 9)"

These correspond with the four subjects in the initials of lot 8 in the Celotti sale, where they are listed in exactly the same sequence:

"Four, by the same hand; very delicately executed. Moses leading the Israelites through the Red Sea; a Monk at his devotions; David at his prayers; and Christ appearing to the Worthies of the Old Testament"

The David at his prayers alias David and the Almighty (on fol. 9 of the Lomax-Wade collection) is this initial: 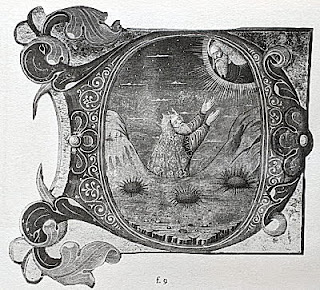 Here is another example. Lot 10 in the Celotti sale is described as:

Of the three named subjects, the most common two, the Virgin and Child, and St Francis, appear in the Ottley catalogue, but not the rarer one, St Bernardino of Siena. In the Lomax-Wade collection, all three appear, on nearly consecutive sheets (as we saw in one of the images above, repeated here):

The St Francis is this one: 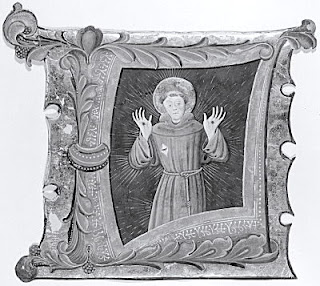 One last example. Lot 4 in the Celotti catalogue is described as:

"Fifteen, by an unknown Artist, circa, 1600. The Nativity; the Angel appearing to the Shepherds, and the Resurrection of Christ; and twelve smaller Initial Letters, without figures."

Dated “circa 1600” in the Celotti catalogue, these must be significantly later in style. If we allow the reasonable possibility that an Ascension was described as a Resurrection, they must surely correspond to this group of fifteen initials in the Lomax-Wade collection:

The Nativity initial described here is this one:. 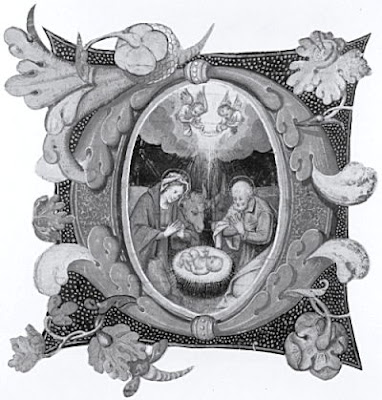 In all the above cases, Anne-Marie noted that the Celotti lots were bought by a bidder named Nebiler, who was also the buyer of the Dominic Loricatus lot. Working on the assumption that the Celotti lots bought by Nebiler all ended up in the Lomax-Wade collection, Anne-Marie was able to make some other, more hypothetical, identifications. It therefore seems that the balance of probability is strongly in her favour.

Before going further, it may be as well to discuss our source material. As regular readers know, I always try to track-down and consult annotated copies of auction catalogues, and preferably multiple copies so that their annotations can be compared (they often differ). A couple of partially-annotated copies of the catalogue exist, but probably the most informative copy is held in the Christie’s Archive; it is interleaved and annotated throughout, and believed to have been owned and annotated by William Manson, who later went into partnership with James Christie (Christie, Manson, and Woods is still the official name of the company that we all know today simply as “Christie’s”). At some point a photocopy was made, and later scanned and made available via the subscription site rarebooks.info, until September 2019 when rarebooks.info ceased operations and its resources were transferred to Stanford University. It has now been made freely available here (kindly brought to my attention by Matt Westerby), although the current arrangement of pages is awkward and many are upside-down. [I have made a ‘corrected’ version of the PDF and can send it to anyone who would like a copy.] To give an idea of the qualiy of the images, and the legibility of the annotations, here are the names and prices that face the page with lots 4 to 11: 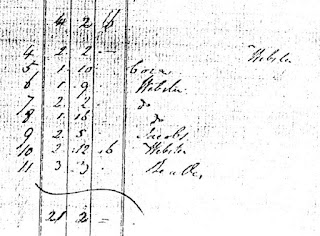 Looking afresh at all the occurrences of his name in the annotated catalogue, however, I suspect that this mysterious buyer actually had a much more common English surname, "Webster":

The crossing of the "t" is just about visible in the third and fourth examples, and the supposed "i" is not dotted in any of them, leading me to believe that it is in reality an "s".

I do not yet know who Webster was (assuming that I have read the name correctly), but it may, in due course, be possible to identify him.

Next week I will look at further aspects of the origin of the Lomax-Wade collection, and the identities of its owners.