Another Leaf of the Missal of Johannes von Giltingen (Augsburg, c. 1485) 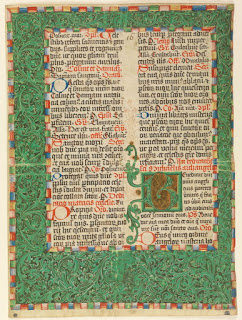 OK, despite what I wrote earlier today, here's a very brief post, lacking in detail.

The Missal of Johannes von Giltingen has been published a few times in the past few decades, most recently in the Beyond Words exhibition catalogue, in an entry by James Marrow [online here], in which he cites the known leaves, and ends by saying:


"Considering the pace at which decorated and illustrated leaves from the commission have been recognized in recent decades, one hopes that some of these presumed missing leaves will also be located."


I can add one more to the list of known leaves: Masson ms 134 at the École des Beaux arts, Paris. The recto has the red ink folio number "clxxvi" in the middle of the upper margin, and the text includes the end of the feast of St Matthew (21 September) and the beginning of the feast of Sts Maurice and his companions (22 September): 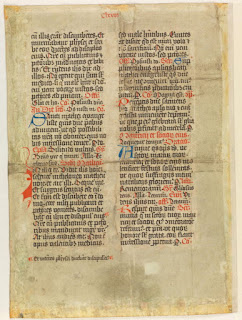 The text on the verso (shown at the top of this post) continues with the feasts of Sts Cosmas & Damian (27 September), the Augsburg feast of the "Dedicacio matricis ecclesie" (28 September) and St Michael (29 September; i.e. the Dedication of Sant'Angelo sul Gargano).

The green foliate decoration of the latter is matched by the full border, in a distinctive style that makes leaves from the Missal easily recognisable: 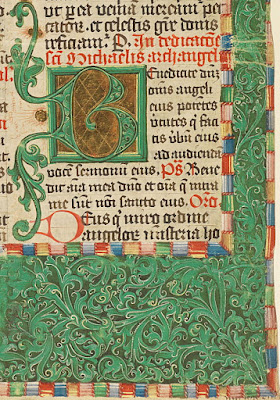 and comparable to the leaf at Harvard:

The newly-recognised leaf in Paris has the number "16" between the columns: 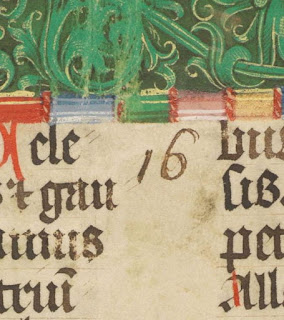