Initials From an Early 13th-Century English Benedictine Psalter, at Princeton and Yale 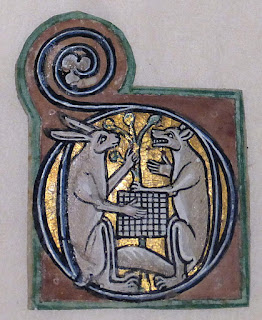 I have always had a particular interest in 12th- and 13th-century English Psalters (including this one), so on my first visit to the Princeton University Art Museum, in about 1992 -- long before digital cameras were generally available -- I took special interest in a group of five illuminated initials including the one above. It appears to show a hare with big ears, and a fox with a bushy tail, playing a game of chess or checkers. [1]

I visited again about 15 years later, in 2007, but even though I now owned a digital camera, I was apparently not allowed to take my own photos of the manuscripts themselves, as the only images I have, are of some of the catalogue index cards: 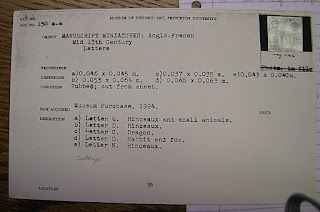 and I made a special point of taking a close-up of the postage-stamp-sized photos glued to the corner, which preserves a record of how they used to be mounted, with a caption "Anglo French / Middle XIII": 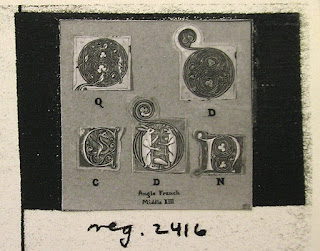 Things had a changed significantly by my next visit several years later, in 2015: not only were much better digital cameras affordable, but I was allowed to take my own photos of the now-remounted cuttings, and can thus illustrate for you the subject of this blogpost: 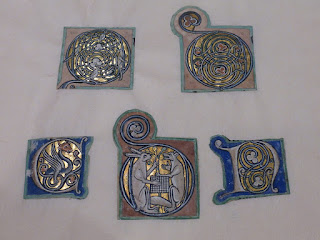 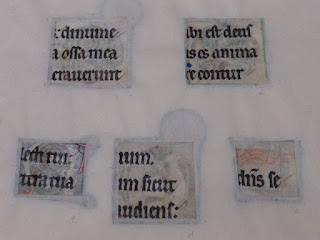 It is not hard to identify the text on the back (not necessarily the verso) of each cutting. Taking them in the order in which they are mounted: 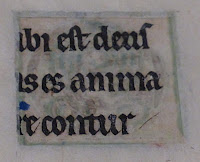 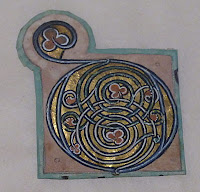 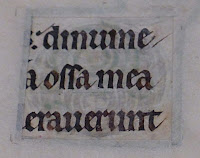 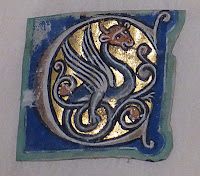 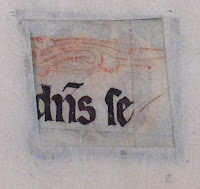 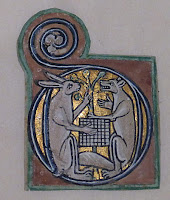 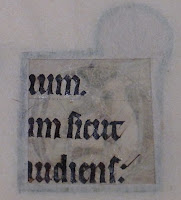 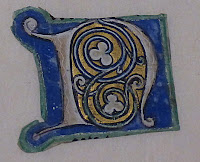 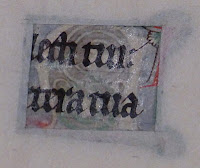 ut liberentur dilecti tui
salvum fac dextera tua
= Psalm 59:6-7 or 107:7, both of which contain these words

The reason for writing this post now, is that I have receently realised that a few more cuttings, apparently from the same parent manuscript, are at the Beinecke Library (MSS 483.11-14): 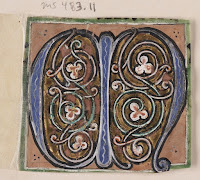 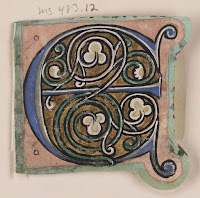 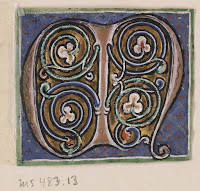 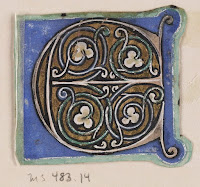 The backs of these cuttings are not available online, but they have been catalogued in some detail [PDF], including the text on the backs, so we can deduce that their texts are laid out like this:

Apart from an overall "feeling" for the style, the formal characteristics that led me to believe that the Princeton and Beinecke cuttings are from a single manuscript include the overall palette and design, typically with a pale buff initial on a blue ground, or vice versa, the whole surrounded by a green bounding-line, and the clover-leaf trefoils with which the spirals terminate:
There are, however, differences: the vegetal spirals of the Beinecke initials tend to be less tight, for example, and they do not interlace in the way that two of the Princeton ones do.

To try to settle the matter I contacted the staff at Beinecke, who kindly provided me with an image of the back of one of their cuttings, and from this we can see that the script is the exactly same as the Princeton cuttings: 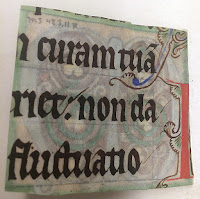 (One could argue that this sort of script was typical of luxury Psalters of this period, and that the differences in the formal qualities of the illumination outweigh their similarities, but there are two more features in favour of them having come from a single manuscript, which will be mentioned in the next blog post.)

To the right of the script in the image above are traces of two more initials, executed in a different technique, and the Beinecke has two more cut-out initials of this type, attributed in their cataloguing to the same parent manuscript:

In the next post I will consider what the evidence tells us about the parent volume, and why I suggest, in the title of this blogpost, that it was Benedictine.


[1] The hare and fox playing a board game may be an allusion to a game like "Catch the Hare" [Wikipedia] or "Fox and Geese" [Wikipedia], which date from at least as early as the 13th and 14th centuries.