Cuttings at the Free Library, From "The Property of a Gentleman" in 1923

Looking recently in a Sotheby's catalogue from 26 March 1923, and two following days, I realised that the present whereabouts of a large number of cuttings could be identified quite easily. This provides a nice example of how a single solid clue can be pursued to reveal a great deal more.

The clue in this case is the description of some distinctive iconography.

The series of cuttings, "The Property of a "Gentleman", consisted of "A Collection of Over 100 Fine Illuminations Upon Vellum of the 14th and 15th Centuries", beginning at lot 693 in the catalogue: 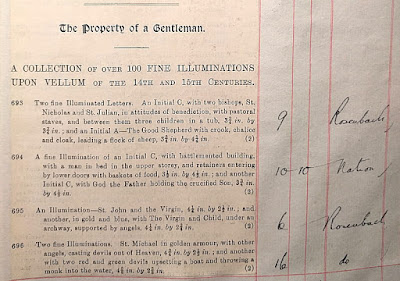 The first begins with:

"An Initial C, with two bishops, St. Nicholas and St. Julian, in attitudes of benediction, with pastoral staves, and between them three children in a tub ..."

The presence of Julian together with Nicholas and the Three Boys seemed unusual to me, but a Google search produced at least one similar composition, now at the Free Library, Philadelphia --although this is an initial "S", not a "C" as described in the catalogue, so the identification is uncertain:
Reading further through the descriptions, however, lot 709 stood out as even more distinctive:

"A very fine initial C, showing seven monks in black robes receiving the blessing of St. Benedict ; in the background are seen cardinals, and a papal tiara lies at the Saint's foot ; on a scroll is written "ORA. PATER. PRO FILIIS. TUIS. ALBERTINENSIBS. ET. PRO. SCRIPTORE. HORUM. VOLUMINUM." On two of the monks' robes, their names are written in gold, 7¾ in. by 6¼ in."

Clearly this describes the initial shown at the top of this post, also now at the Free Library, Philadelphia; here is a detail of the scroll, and the monks with their names in gold on their robes: 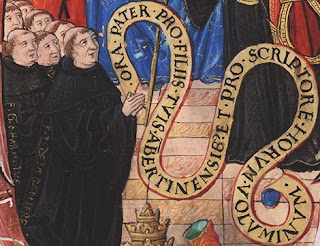 Having found that two different Free Library cuttings, both bought at Sotheby's by "Rosenbach" (doubtless the Philadelphia bookdealer Dr A. S. W. Rosenbach [Wikipedia]) could be identified certainly in one case, and possibly in the other, it was an obvious next step to try to identify the other lots he bought.

The second item in lot 693 was "an Initial A--The Good Shepherd with crook, chalice and cloak, leading a flock of sheep", a very weird subject, that must be this:
The next lot bought by Rosenbach was lot 696; here, in addition to the fact that the devils are "red and green", the recorded dimensions show that they are likely to be these tall thin miniatures:

"Two fine illuminations. St Michael in golden armour, with other angels, casting devils out of heaven, 4¾ in. by 2½ in.; and another with two red and green devils upsetting a boat and throwing a monk into the water, 4⅝ in. by 2⅝ in."

Another item with unusual iconography was the second item in lot 669,

"Christ working as a carpenter", presumably this:
Some scenes sound somewhat generic, but it seems more than coincidence that in this cutting the foreground has Sts Lawrence, Stephen, and Denis, in the foreground, in that order from left to right, with Christopher behind them, corresponding to this description:

By now it is possible to see that all the cuttings so far belong to a similar aesthetic (presumably reflecting the taste of the anonymous collector), and many of the cuttings belong with others stylistically, and appear to have some from the same parent manuscripts. We can therefore assume that other cuttings at the Free Library in one of these styles probably belong in the same group, even if the description in the Sotheby's catalogue on its own were not enough to make such assertions

I have not yet attempted a complete list, but will perhaps do so in a future post.
Posted by Peter Kidd at 12:15