More About The Elmhirst-Courtanvaux Hours 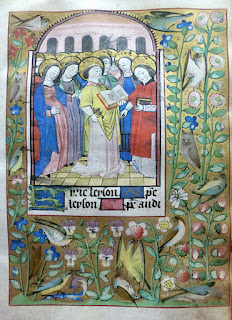 Several more leaves from the manuscript I am calling the Elmhirst-Courtanvaux Hours have been consigned for sale at Sotheby's on 23 May. They provide two important clues as to the place of origin and the patron.
In a previous post, I suggested that "a rampant lion in one of the initials [below the miniature of The Deposition] could possibly be heraldic". 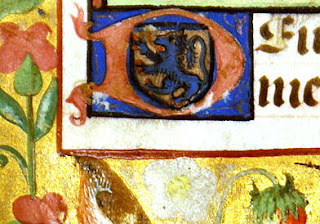 Perhaps because I only have a small black and white image, I had previously overlooked that these arms also occur in the initial below the Pentecost miniature: 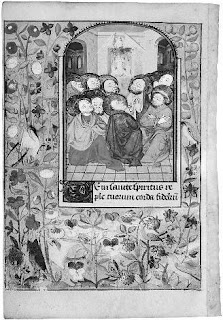 The presence of exactly the same arms a third time, in one of the new Sotheby's initials, beneath the miniature at the beginning of the Office of the Dead, makes it even more likely that the arms are "real" rather than invented: 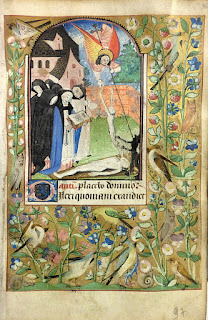 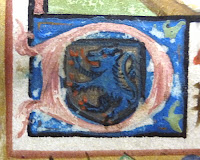 In retrospect, it was always inherently likely that the arms are "real", because if they were merely decorative it is doubtful whether the illuminator would have taken the trouble to paint the lion with red claws and tongue ("armed and langued gules", in heraldic terminology).

At least two French families seem to have borne these arms:
Another of the Sotheby's miniatures provides a possible clue as to the place of production of the manuscript (whose style has not been recognised in any other manuscripts thus far).

As explained in the previous post, the manuscript has been incorrectly attributed to Bourges in the past; the most recent Sotheby's catalogue suggested that Châlons-en-Champagne is a more likely place of origin. There is, very unusually, a miniature at the beginning of the Litany, shown at the top of this post. It depicts a group of saints: 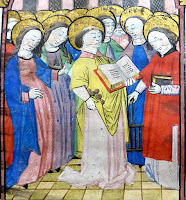 In the centre foreground is St Stephen, in bright yellow. The only two other saints who are identifiable are St Catherine, to the left, holding a fragment of a wheel, and St Lawrence, to the right, more obviously holding his grid-iron. These saints may be fairly randomly chosen by the artist, but it may be relevant that St Stephen is given the greatest emphasis, and the cathedral of Châlons is dedicated to him.