This week, I learned of the existence of the significant library of George Jackson, an English merchant who lived in Livorno, and about whom I would like to know more.

Two versions of his anonymous catalogue are online. One, at the British Library, was printed at Livorno in 1756, and has a number of annotations on the title-page, identifying Jackson as the owner: 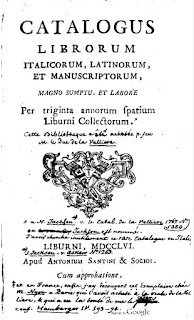 The manuscripts are described on pp.625-63 and numbered separately from the printed books, 1 to 215: 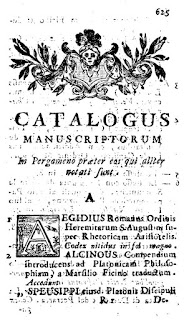 The title-page annotations also record that the collection was acquired by the Duc de la Valliere (1708–1780); as is well known, many of the duc de la Valliere's books were bought by the Marquis de Paulmy, (1722-1787), and are now in the Bibliothèque de l'Arsenal in Paris.

The other copy of the catalogue, at the Biblioteca Nazionale, Turin, printed somewhat later, includes an Appendix, paginated 1-20 (of which pp.15-20 are devoted to manuscripts): 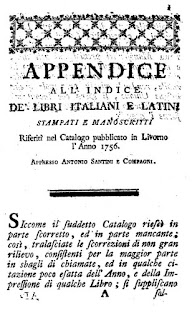 A significant number of the manuscripts should be fairly easy to identify, thanks to details in their descriptions. To give a few examples:

No.43 is a copy of Bonaventura's Psalter of the Virgin written "per Fratrem Johannem de Rotondisco":

It can therefore be identified as Paris, Bibl. de l'Arsenal, ms.420:

No.110 is a Jerome's Breviarium in Psalmos copied in 1488 by Antonio Sinibaldi for Matthias Corvinus: 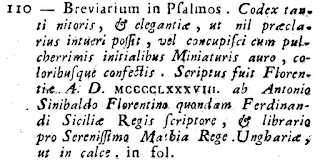 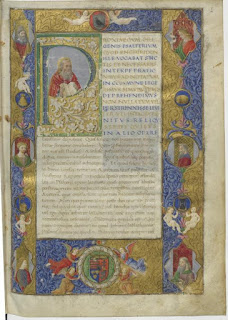 No.60 is a copy of Cicero from the library of Sozomeno with a famous inscription stating that it is better to buy second-hand books than to commission new ones, because of the expense: 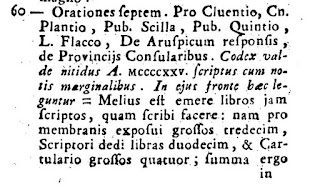 Because of the quoted inscription, it can easily be traced through the subsequent catalogues of the duc de la Valliere (1783, lot 2297): 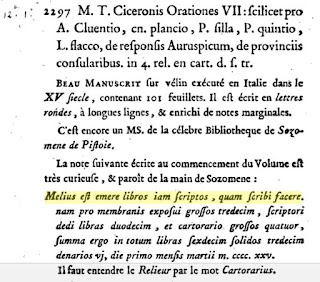 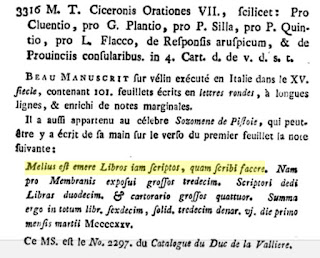 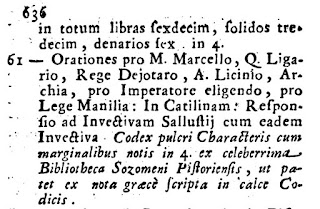 Jackson's library, especially his manuscripts, is currently being studied by Francesca Masi. Anyone with information about their current whereabouts is encouraged to contact her, or me.