I have recently become more interested in large Bibles. (Small ones may of course be very interesting, too, but they can be very fiddly to handle, often involve a lot of page-turning and eye-strain for very little reward, and if they are not in an institutional collection they are often unfoliated (or incorrectly foliated), which makes them difficult to describe and collate).

Compared to small "pocket" Bibles, big ones are relatively uncommon, which means that if you encounter single leaves, there is a pretty good chance of finding other leaves from the same parent volume. Since about 2003, when I photographed the leaves and cuttings in the Prints and Drawings Department at the V&A, I have occasionally wondered about the volume from which the image above comes; here is the full page: 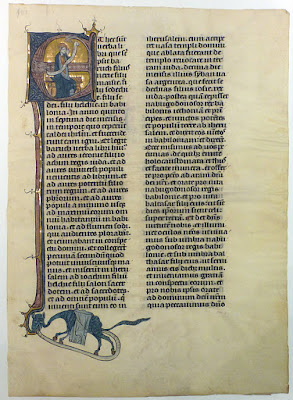 Among the cuttings is this one: 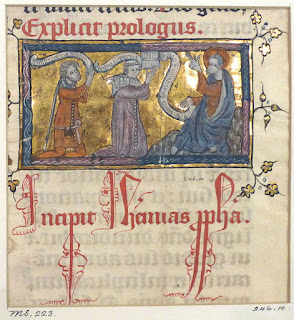 Another cutting, of the Crucifixion, has more figures with scrolls: 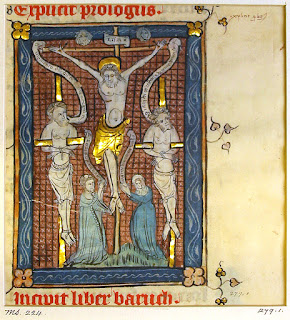 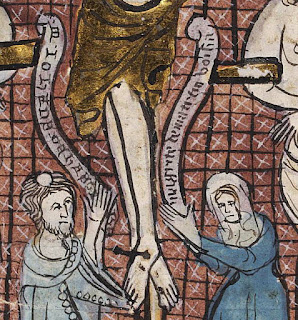 Hastière is south of Namur: 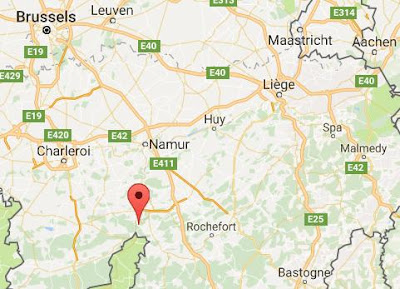 I recently downloaded the images (more than 6,000 of them) of the Lewis western manuscripts from the website of the Free Library at Philadelphia, so that I could sort, sift, and browse them more conveniently. This process led me to realise that the V&A leaves and cuttings are by the same illuminators who painted the initials on 30 leaves now in the Free Library, and other details such as the number of lines per page confirm that they come from the same parent volume.

Googling "Egidius de Romereet" also led me to a series of 5 more illuminated leaves at the Beaux-arts de Paris, l'école nationale supérieure (PC 22788.3-7). These had belonged to the architect Joseph-Michel-Anne Lesoufaché (1804-1887) and were acquired in 1891. The connection with the Philadelphia and London leaves and cuttings had already been noticed by François Avril, but there do not appear to be any images online, and the online descriptions do not always make it clear what the text of each leaf is.

With the 30 (Philadelphia) + 14 (V&A) + 5 (Paris) leaves and cuttings, we presumably have well over half the illuminations from the Bible. More will doubtless surface. I will put a list of the known ones on another Membra disiecta page.

For the sake of convenience I will call this the Hastière Bible, simply because the inscription of "Iohans de Hastiere" is confidently legible, and probably indicates the general region in which the book was made.

The leaves are paginated in pencil in a continental hand, and in many cases these numbers are visible in the digitial images. They suggest that the Bible was previously bound in three volumes each of about 450-600 pages (i.e. 225-300 leaves), with vols.II and III starting at Chronicles and Ezekiel. 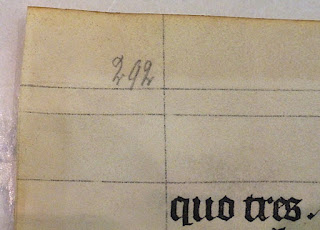 It is worth looking through the images, as some of them have interesting and unusual iconography. This creature appears, for example, for no obvious reason, in the margin at the beginning of Matthew, holding a scroll that reads "Domine dominus noster quam admirabile"! (Psalm 8:2):


Edit, 3 Oct 2016:
François Avril has contacted me and kindly sent me images of three more leaves from this Bible, now in Munich and Nuremburg; I have added the references to the listing on the Membra disiecta page.
Posted by Peter Kidd at 15:14