A week ago I visited the current exhibition of manuscripts at Lille. It was mostly very unimpressive, with low-quality objects displayed in a bizarre setting. But it did have a few high-quality items, notably the two surviving full-page miniatures of the Liessies Gospels.

One other item especially caught my eye: a framed group of 13 cuttings from a Bible, owned by the Musée de Picardie, Amiens, with bright burnished gold backgrounds, and unusual interlace ornament on many of the extremities of the historiated initials: 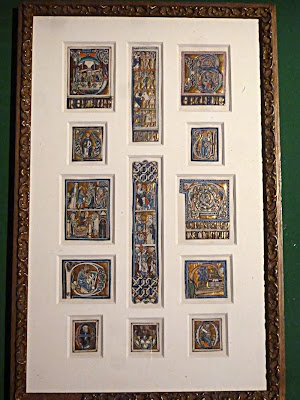 Two of the cuttings clearly show scribes holding a pen-knife in their left hand while they write: 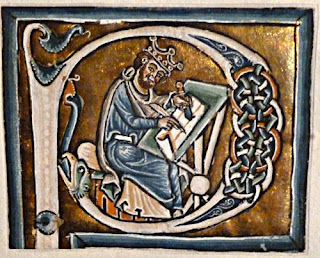 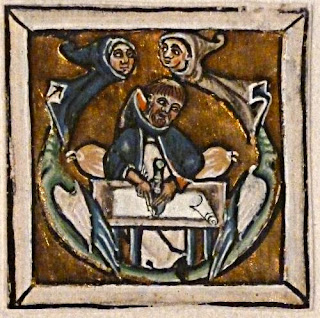 I recognised these as being from the same parent manuscript as a cutting sold by Sotheby's in 2000 (6 July, lot 14), and again by Christie's a year ago, which I had seen and photographed a few weeks earlier, thanks to its current owner: 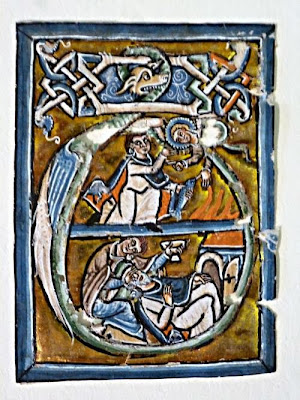 The figure style can perhaps be most easily compared with a miniature among the thirteen cuttings: 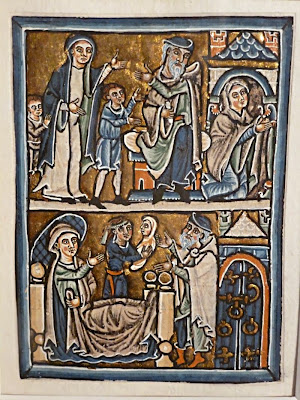 The style is unusual, hence Sotheby's attributed it to "northern France (probably Paris)", "c.1220" and Christie's to "England?", "c.1215". In fact (as I learned from the catalogue desription) there is ample evidence to attribute them to Navarre or Castile, Spain, c.1230-50, as the parent volume has reliable provenance going back to Seville cathedral in the 14th century, having been bequeathed by King Sancho IV (d.1295), and apparently previously owned by his father Alphonso X (d.1284) and commissioned by his grandfather, Ferdinand III (d.1252).

I had myself been very unsure of the style (thinking that both England and France were wrong, and thus hazarding a guess at Belgium), but in retrospect the script on the back should have been enough of a clue to suggest its correct origin: 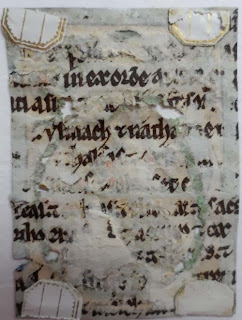 Originally in three volumes, two are still in Seville, known as the Bible of Pedro de Pamplona, after a colophon in which one of the scribes names himself. A few black and white images are available online: 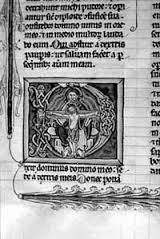 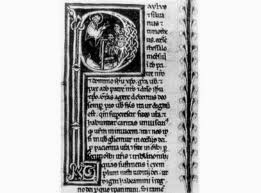 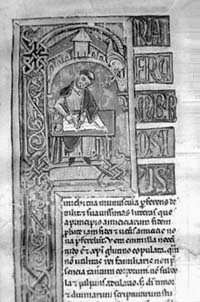 In 1884 about 60 leaves, miniatures, and initials were excised, apparently to be sold in Paris soon after. By 1900 the Amiens group were owned by Albert Maignan (d.1908), and were lent by him to the Exposition Universelle in Paris (Catalogue officiel illustré de l’Exposition rétrospective de l’art français des origines à 1800 (Paris, 1900) p.307 no.3383):

In addition to the thirteen cuttings now in Amiens there are three in Paris (recognised by François Avril; no images online) and three in Philadelphia (with online images). The ex-Sotheby's and -Christie's one is the only one known to be still in private hands.

I have yet to substantiate the claim that the Bible was commissioned by Ferdinand III, but even without the necessary evidence, the cuttings have an interesting provenance.
Posted by Peter Kidd at 12:34